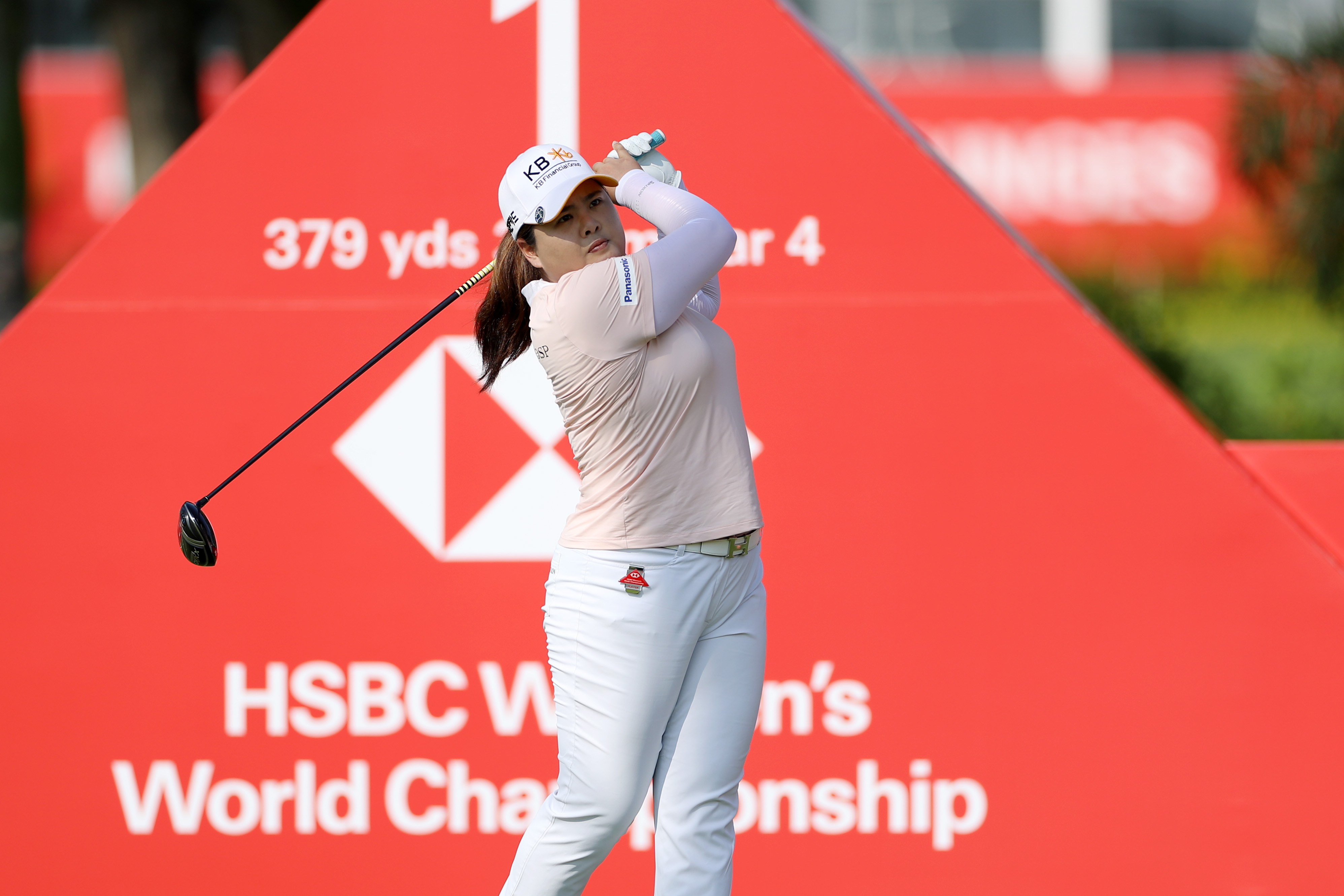 SINGAPORE, SINGAPORE – APRIL 29: Inbee Park of South Korea hits her tee shot on the 1st hole during the first round of the HSBC Women’s World Championship at Sentosa Golf Club on April 29, 2021 in Singapore. (Photo by Lionel Ng/Getty Images)

World No.2 Inbee Park showed her class on the first day of the HSBC Women’s World Championship in Singapore, finishing with an eight-under par score of 64 to put her at the top of the leader board, one shot ahead of fellow South Korean Hee Young Park.

Already a multiple winner at Sentosa Golf Club, Park’s reputation as a formidable putter stood up to the test, with four birdies on both the front and back nine holes. The reigning Olympic champion comes to Singapore is in a rich vein of form having won the Kia Classic at the start of the year and tied for second place in the Lotte Championship a fortnight ago.

Park, who has her husband Gi as her caddy this week, credited him with her success in the first round.

“I think I’m going to give him ten [out of ten] and probably ten for the rest of the week because I’m really thankful that he’s doing this for me and in this heat. It’s very tough conditions. I’m just really thankful that he’s carrying the bag. I don’t need an exact number. I don’t need anything. I just need him next to me, that’s all, just carrying the bag.

“We’re both really enjoying ourselves out there. I didn’t even know what score I was shooting today. I was going hole-by-hole like it’s 14 to go, 13 to go, three to go. I just had fun out there with him. I hit a lot of fairways and greens. It was really a stress-free round, and I was able to read the putts really well with him and that helped.”

Looking back to her HSBC Women’s World Championship wins in 2015 and 2017, she added, “It definitely reminded me of some good memories when I was playing good out there today. If I can raise this trophy again this time, I definitely thought about it. The good memories definitely make me concentrate even harder.”

Hee Young Park’s round of 65 included a bogey on the par-three seventh hole and an eagle on the par-four tenth. Playing in her 14th year on the LPGA Tour, she will see this as an opportunity to build on her record of three LPGA wins.

Playing alongside Mirim Lee and Megan Khang, Hee Young Park said, “I just tried to survive with this heat in Singapore. I love it, but after I played the front nine, I had a good moment on ten. Made an eagle. That really makes everything easier, less pressure and then I played with nice people, nice girls today and we tried to have fun with this hot weather. So, I think everything goes, like everything easy. Hit the fairways and greens and easy to make two-putt and sometimes birdie.” 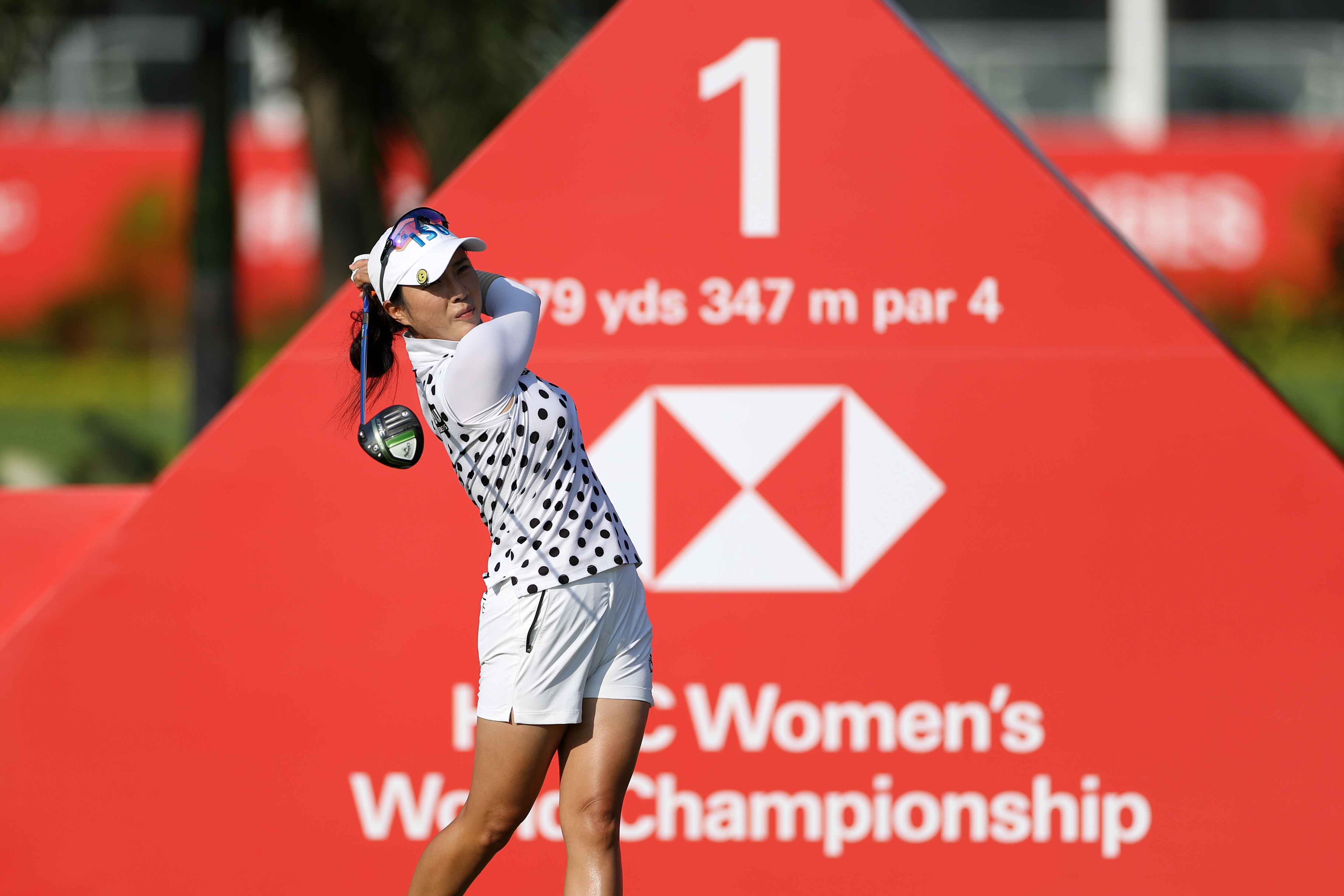 SINGAPORE, SINGAPORE – APRIL 29: Hee Young Park of South Korea hits her tee shot on the 1st hole during the first round of the HSBC Women’s World Championship at Sentosa Golf Club on April 29, 2021 in Singapore. (Photo by Lionel Ng/Getty Images)

Two shots further back and tied in third place are Caroline Masson and Sophia Popov of Germany, Hyo Joo Kim and So Yeon Ryu of South Korea and Xiyu Lin of China.

Caroline Masson, who has shown consistent form in recent visits to Singapore, holed eight birdies with three bogeys. Speaking about competing back in Singapore, she said, “It feels good. Even though it’s not back to normal, it feels like a step in the right direction for us to come back overseas and play. You know, Asia is always huge. It’s a big market and they are great tournaments. It’s just nice to be back here. It’s hot but I love it and I just want to embrace it and appreciate the opportunity of being here and I think that’s what I’m going to do the next couple of weeks.” 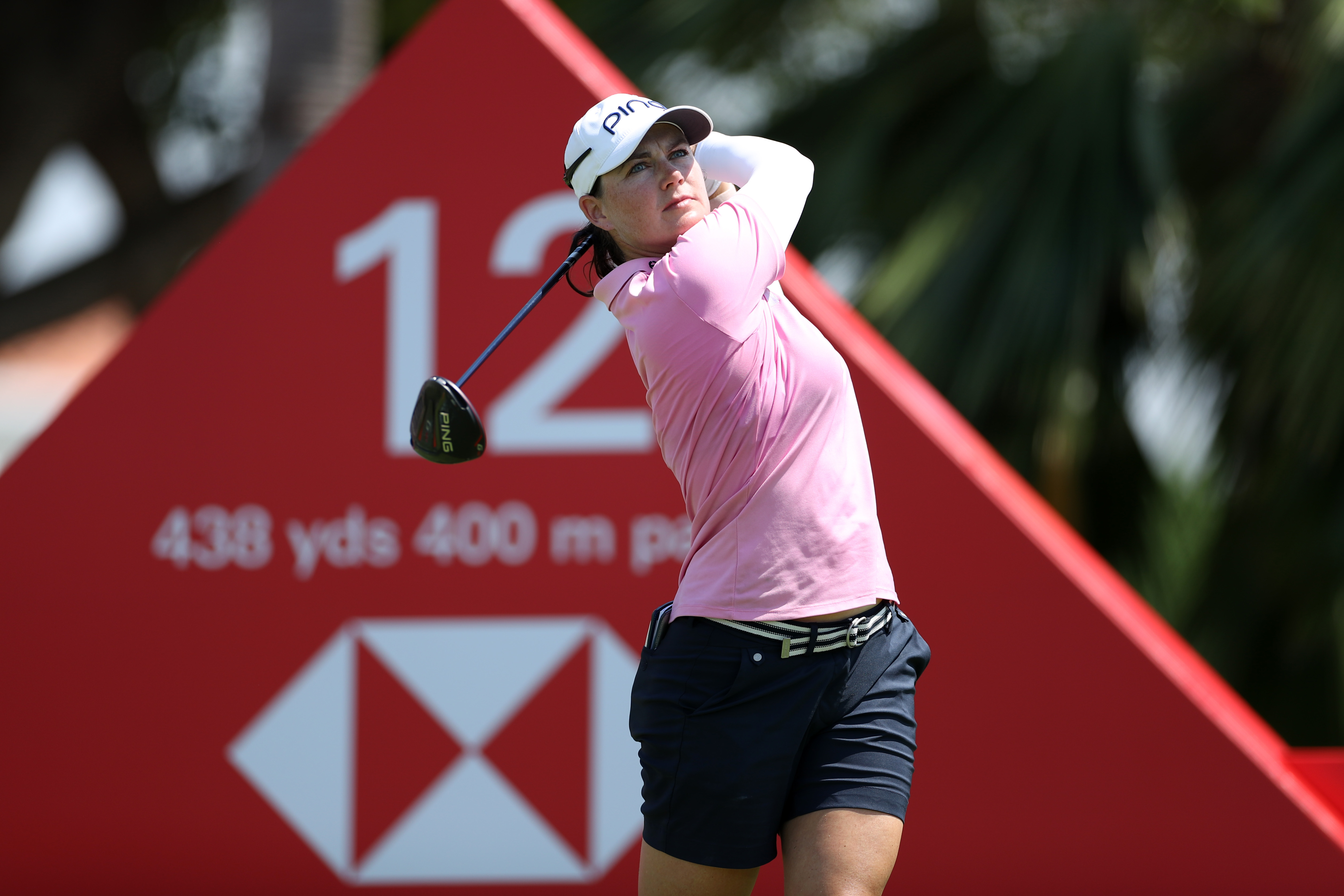 SINGAPORE, SINGAPORE – APRIL 29: Caroline Masson of Germany hits her tee shot on the 12th hole during the first round of the HSBC Women’s World Championship at Sentosa Golf Club on April 29, 2021 in Singapore. (Photo by Lionel Ng/Getty Images)

Starting in the first flight of the day at 7:25 a.m., it was tournament debutant Sophia Popov who took the early clubhouse lead. Seven birdies, with a bogey either side of the turn, leave her in a strong position after day one on her first visit to Singapore.

Asked how she was feeling about her first round, Popov said, “A lot better now that I’m in the clubhouse and out of the heat. But no, I feel great. I had a really solid start. I haven’t played this course before. I haven’t been here; it’s my first time. So, it was really nice. I enjoyed it and yeah, definitely excited about having a good start.” 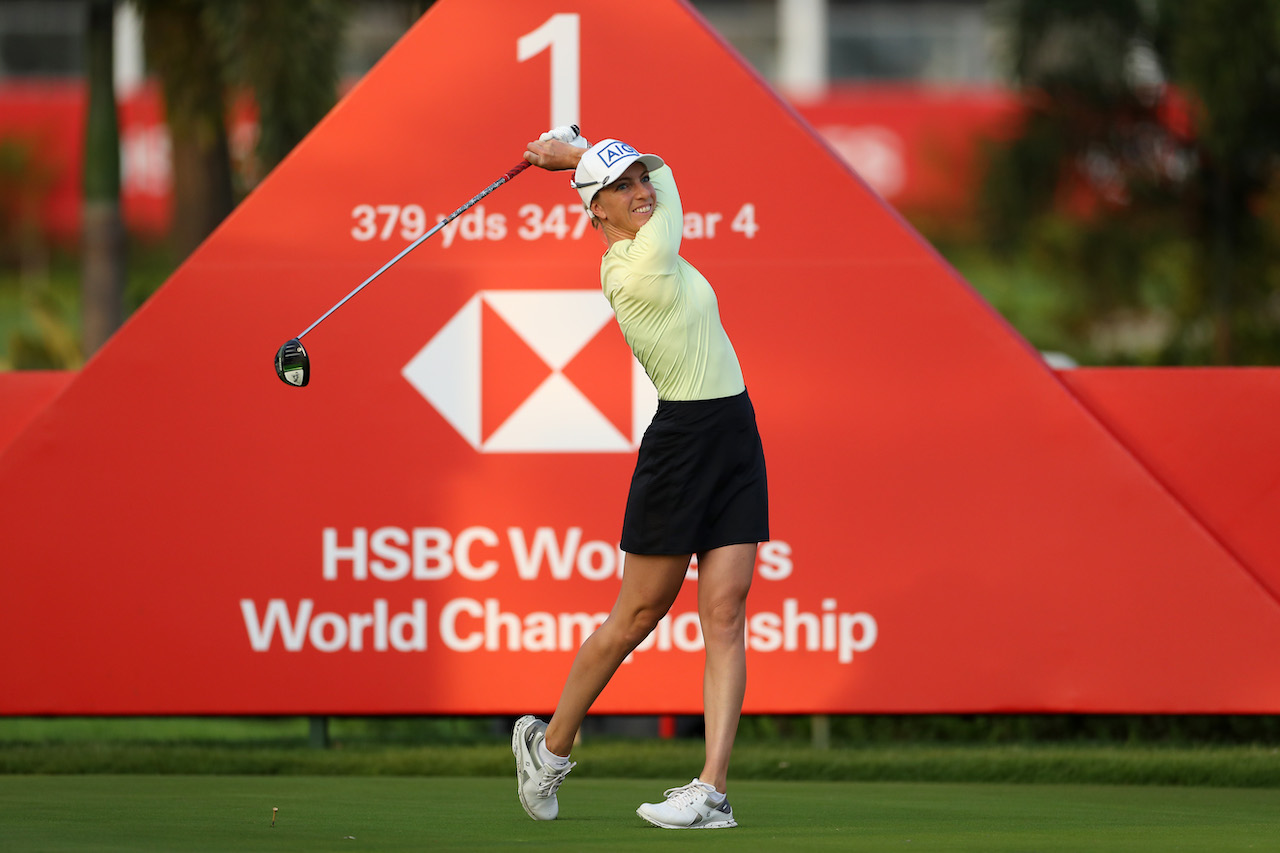 SINGAPORE, SINGAPORE – APRIL 29: Sophia Popov of Germany hits her tee shot on the 1st hole during the first round of the HSBC Women’s World Championship at Sentosa Golf Club on April 29, 2021 in Singapore. (Photo by Lionel Ng/Getty Images)

The 28-year-old shot to international stardom last August following her major victory at the AIG Women’s British Open and is clearly relishing the opportunities that such a win presents.

“It’s definitely been a very cool experience for me. I think I’ve watched this tournament over the years and saw the other girls playing and I was never able to qualify for it. I think that’s one of the perks that came with winning the AIG Women’s Open last year. I think that’s just been kind of almost like a bonus week for me again just being able to enjoy being out here with the Top-70 girls right now and I’m playing on a really, really nice golf course,” said Popov.

For defending champion Sung Hyun Park, it was a day to forget. The South Korean, who enjoys a strong following in the Lion City, wasn’t able to repeat the form she showed back in 2019 carding a six-over par round of 78.

Singapore’s Amanda Tan is two shots ahead of her at four-over par and tied in 66th place.