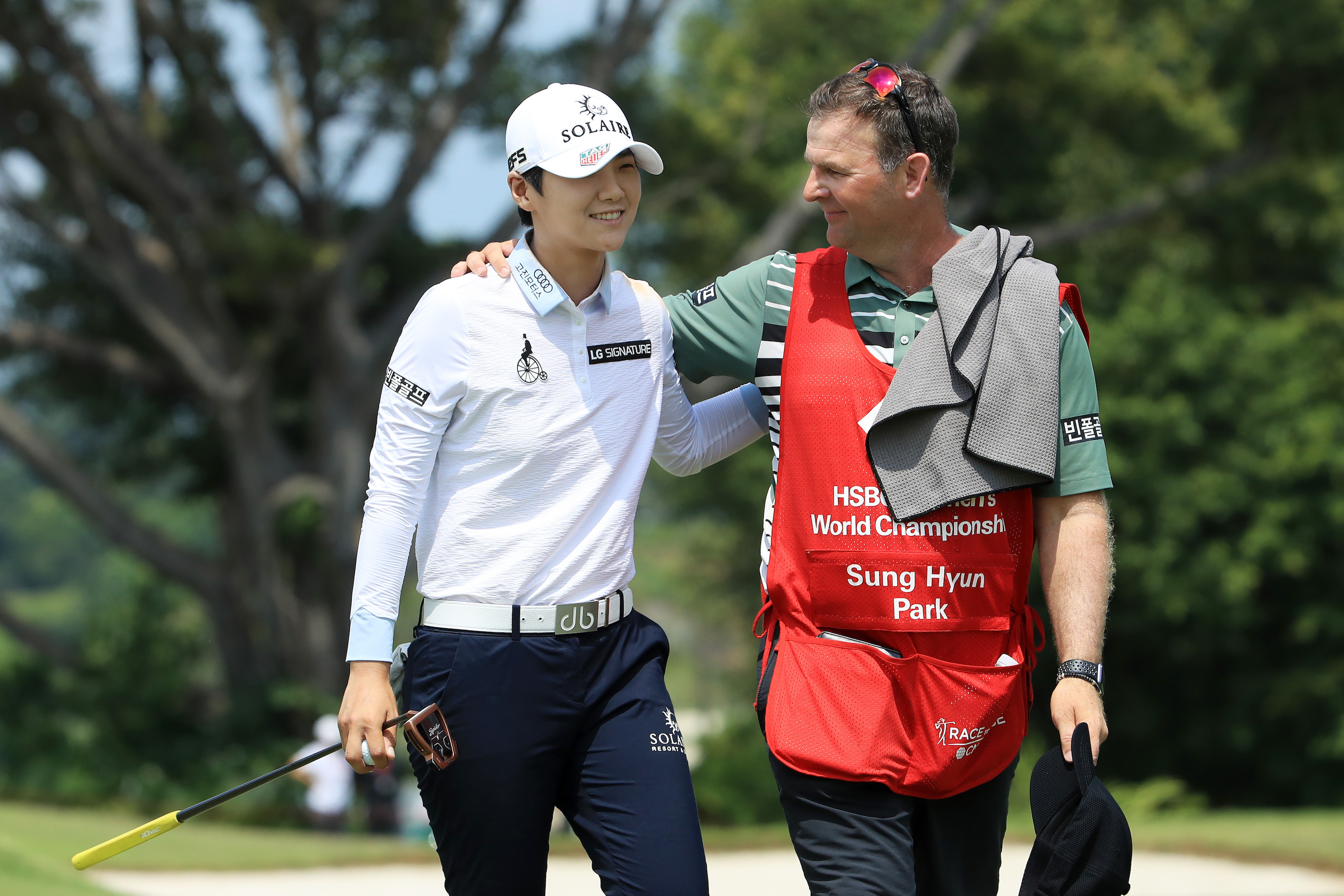 Sung Hyun Park of South Korea and her caddie celebrate after finishing on the 18th green during the final round of the HSBC Women’s World Championship at Sentosa Golf Club on March 03, 2019 in Singapore. (Photo by Andrew Redington/Getty Images)

With this week’s HSBC Women’s World Championship marking the LPGA Tour’s first tournament in Asia since November 2019, players had the chance to reacquaint themselves with both course and conditions at Sentosa Golf Club, Singapore.

Even with the 17-hour flight from Los Angeles to the Garden City and the need to adhere to strict safety protocols throughout their stay, spirits were high amongst players.

Out to defend her title is Sung Hyun Park, who earned her sixth-career victory on Tour at Asia’s Major back in 2019. Park said: “It’s nice to be back in Singapore again. It still is very hot, so I’ve been sweating a lot the entire day. The course looks like it’s in really good condition. I noticed a couple changes in some of the holes, so it was a good, fun practice round.

“Winning in 2019 was a huge confidence boost. I usually don’t start very well at the beginning of the season, but winning in Singapore, I think really gave me that confidence boost and I was able to play more comfortably throughout season.”

The World No. 1 Jin Young Ko is back in Singapore for the third time, looking to build on her last two visits to Sentosa Golf Club.

She said, “My game is getting better, so I hope soon to be in the winner’s circle, and I will focus on my game and I will fight with heart.”

Commenting on her ranking, Ko said she took inspiration from her father, a former boxer: “When I was younger, I was in competition with my father a lot. So, my father wanted to be stronger than me, and me, too. I want to be stronger than yesterday. So, the World No.1 Ranking, this position is not easy, but if I’m playing better and better, I can keep this position one month or two months or even more. That is good motivation for me; I want to be a stronger person and a happier person.”

Inbee Park is the only multiple winner of the HSBC Women’s World Championship, earning her victories in 2015 and 2017. Now sitting at No. 2 in the World Rankings since the week of March 29th, Park said obtaining No. 1 in the world again isn’t something she plays for.

Like all players, the seven-time major winner has had to quickly regroup following the flight to Singapore.

“Probably, we spent about 30, 40 hours just indoors,” said Park, who along with the rest of the incoming participants had to test and quarantine until receiving negative results. Park said she’s grateful to return to a place she remembers so fondly.

“Singapore is definitely a special spot for me and I really love the country, and being here. It has been very tough call for the tournament but I’m really thankful that they made the decision for us to come here and play. I’m really, really happy to be back here again in Singapore with great memories.”

Lydia Ko is doing her best to adjust to the time difference in Singapore. A seven-mile hike with Kristen Gillman before her flight helped her sleep for 13 hours en route. Though the jetlag hit her more on Tuesday, Ko started her day with a 6 a.m. workout.

“I hope I wasn’t loud for the person in the room staying under me. It’s not often that I wake up early enough to work out at that time.”

Ko continues to ride off the high of her win two weeks ago. Her 16th victory on the LPGA Tour, Ko said she proved to herself she had the ability to make it back inside the winner’s circle. The newly turned 24-year-old said, “I feel like I’m still coming in with good momentum and winning in Hawaii, I definitely built the confidence for me to say that, ‘hey, you know, I can be back in the winner’s circle’. So great to be in that kind of a position again.”

And if battling jetlag was one obstacle, Ko said the heat will be another that the 69-player field will have to adjust to as the week goes on.

“The best way to explain it is like going to a sauna, but you don’t have to pay. It’s a complimentary sauna pretty much throughout day. But everyone is playing in the same conditions. The storm is going to hit at the same time, so I don’t think it’s an advantage to one player or not.”

With limited spectator access due to Covid safety restrictions, fans can catch all the action as it unfolds in Singapore and around the world. Fans in Singapore will be able to watch live coverage each day on Hub Sports and Channel 5 as well as via the tournament’s Livestream on Facebook.