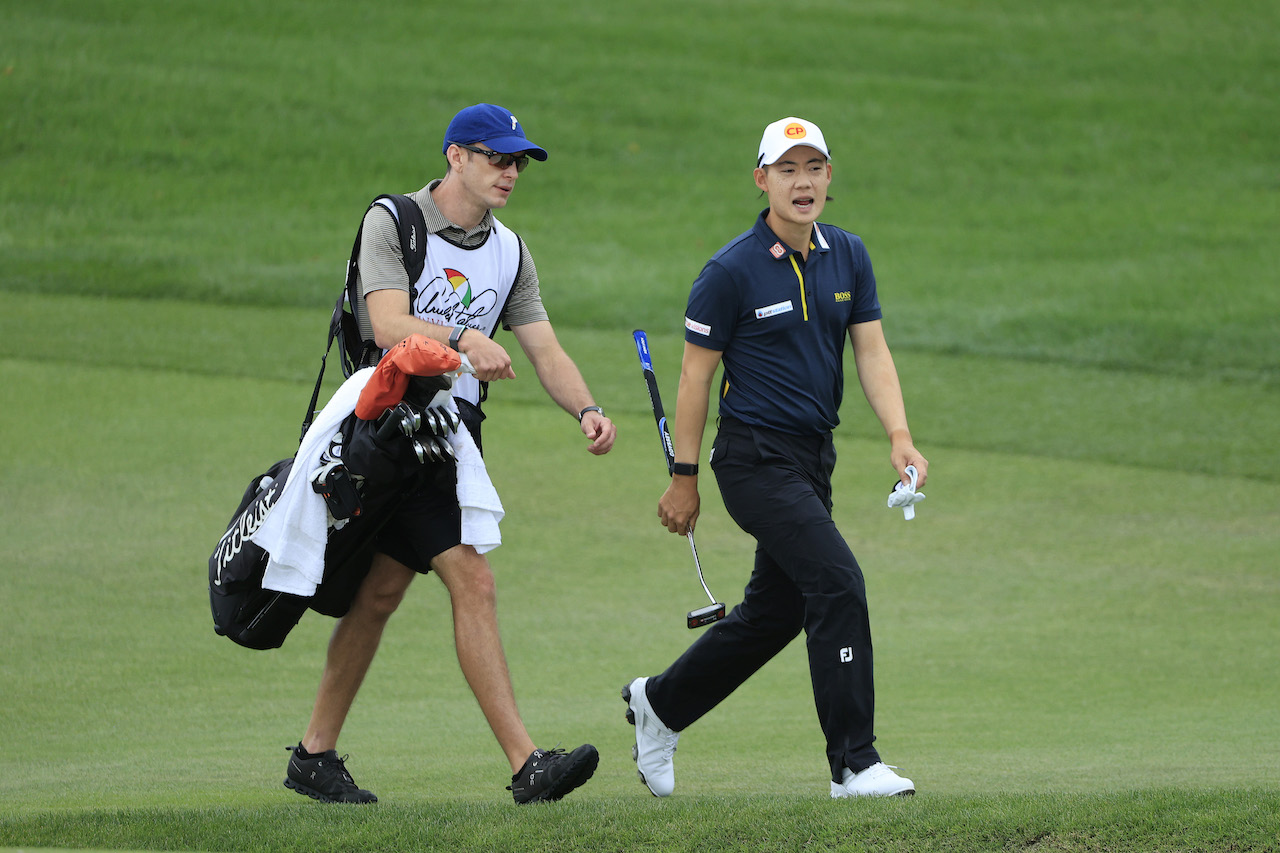 Jazz Janewattananond of Thailand walks with his caddie on the second hole during the third round of the Arnold Palmer Invitational Presented by MasterCard at the Bay Hill Club and Lodge on March 06, 2021, in Orlando, Florida. (Photo by Sam Greenwood/Getty Images)

Thailand’s rising star Jazz Janewattananond had a day to remember at the Arnold Palmer Invitational presented by Mastercard on Saturday.

The 25-year-old, who is playing this week on a tournament’s exemption, sank his career first hole-in-one on the PGA Tour at the par-3 14th hole at Bay Hill Club and Lodge en route to a 3-under 69, which moved him into tied seventh place, four shots behind leader Lee Westwood who leads on 11-under 205.

A day after he carded a superb 65 to improve from an opening 75, Jazz made three other birdies against two bogeys on a day he missed 50 per cent of fairways and greens in regulation. The one-shot that counted most was a beautifully flighted six iron which took four little bounces on the green before rolling into the hole, much to the delighted a small crowd gathered around the green.

“Good call, good club,” said a beaming Jazz, whose effort meant that Mastercard would donate US$200,000 to the Arnold & Winnie Palmer Foundation. 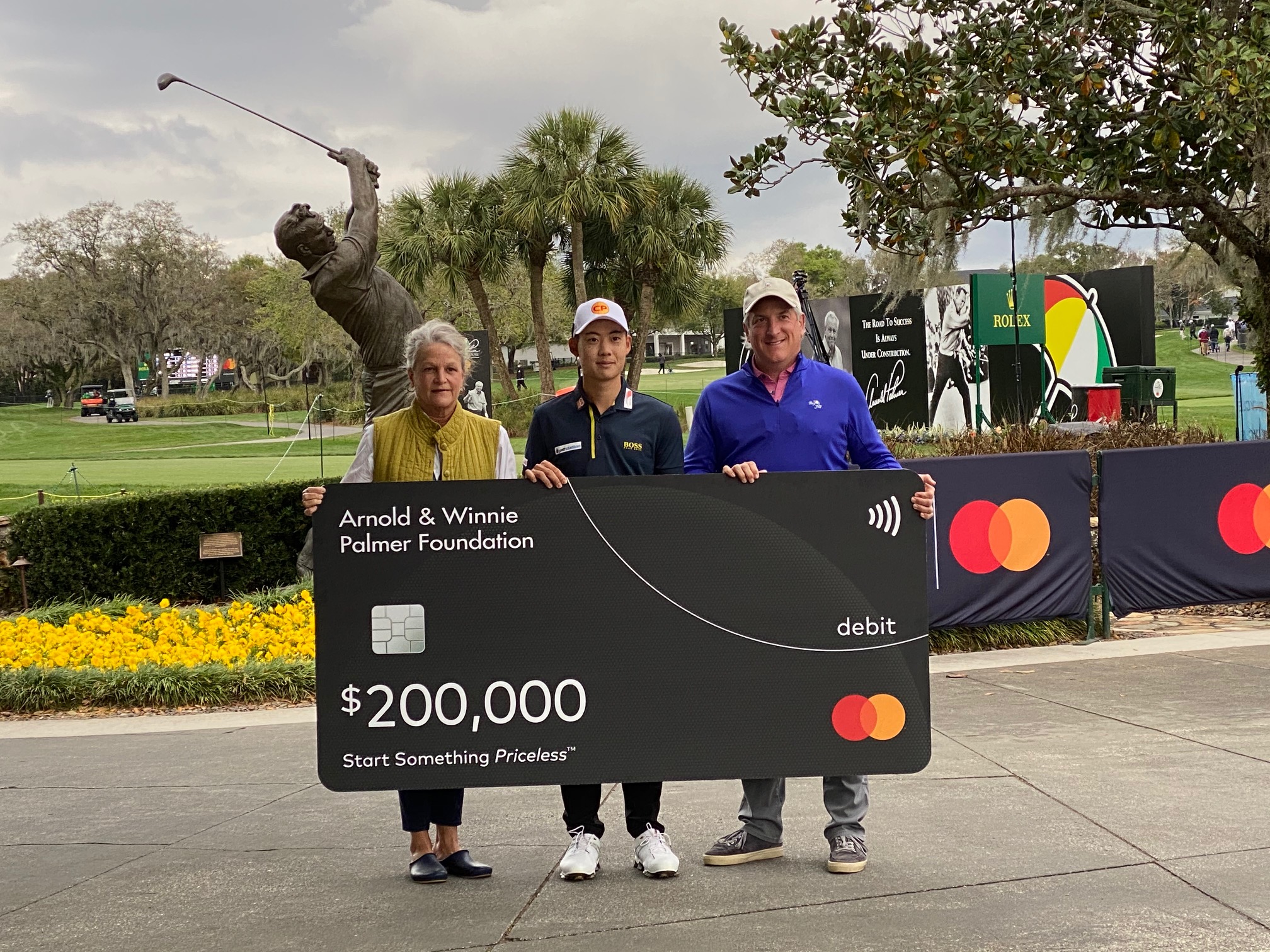 Jazz Janewattananond with a mock cheque after his hole in one. Photo: PGA TOUR

“I was a member here for four months during COVID last year, and I didn’t have one hole-in-one. So it’s good to have in a tournament, and it’s very special to have Mastercard donating US$200,000 to Arnie’s Foundation.

“I was in between a hard 7 and a soft 6 (iron). And my caddie was nudging me into the soft 6, and the rest is history. The round was very choppy at the end and choppy at the start as well. The middle was pretty good. Overall, pretty happy as it was tough conditions.”

His scrambling saved him on a few occasions, which now gives him a shot, an unlikely win after how his week started with his 3-over par round. He made a 26-foot birdie on 16, rolled in a putt of 22 feet to save par on 17 and got up and down from the bunker four times to outscore playing partner Max Homa, who won The Genesis Invitational recently by three shots.

“I think we might get a little bit more sun tomorrow. The golf course might play a bit different, so we can go at more pins than today. But yeah, the same plan is really to try to hit the fairway, try to hit the green. It’s great because I know Roy (Saunders, VP of Bay Hill) personally, and he’s the one who gave me the invite to play here, so it’s really good to be able to give back to that,” said Jazz.

He spent nearly six months in the U.S. last year after the coronavirus pandemic shut down sports leagues and international borders around the world and stayed over an extended period with two-time PGA Tour winner Daniel Chopra, who lives in Orlando and is a Bay Hill member. He is staying with Chopra and family again this week.

“I mean, there’s home course knowledge that helps in the fact here for sure. I must have played over a hundred rounds in shoot-outs like they have every day with the members, and we kind of had fun, and it’s great. Just learning the culture here as well,” said Jazz.

“I’m really fortunate because when the Players got cancelled after round 1 last year, Thailand’s border was closed, so I didn’t have anywhere to go. I called my friend Daniel, whom I’m staying with this week as well, asking if I could stay with him for a few days, and it turned into a few months. So it’s a great story.”

It would be a greater story if Jazz can pull off a victory on Sunday as no Thai player has won on the PGA Tour.