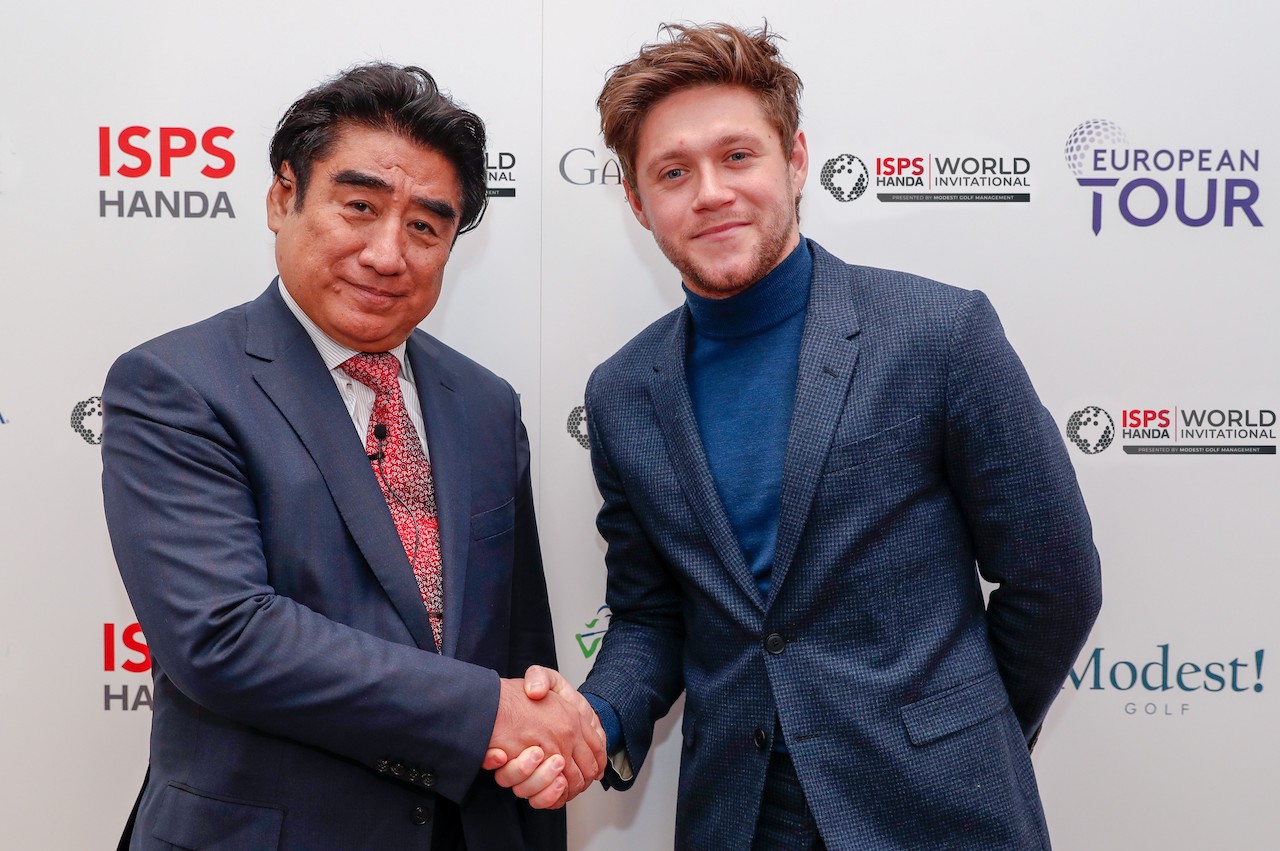 Niall Horan and Dr Haruhisa Handa, which was taken in January 2020 prior to COVID-19 restrictions and social distancing measures. Photo: European Tour

The agreement heralds an exciting new chapter for the event, which has been elevated to European Tour status following a hugely successful inaugural edition on the European Challenge Tour in 2019. The 2021 event will continue to be played over two courses, Galgorm Castle and Massereene and will form part of the European Tour’s 2021 UK Swing, taking in tournaments in Wales, Northern Ireland, Scotland and England across July and August.

It will be the first time an event of this format is tri-sanctioned by the European Tour, LPGA Tour and Ladies European Tour in the northern hemisphere – following in the footsteps of the ISPS HANDA Vic Open in Australia which has the same format.

The ISPS HANDA World Invitational will attract a field of 288 players, 144 men and 144 women. The women’s field will be split equally between the LPGA and the Ladies European Tour. The $2.35 million purse will be split evenly, with men and women competing for two equal prize funds.

ISPS HANDA Founder and Chairman, Dr Haruhisa Handa, said: “We are absolutely thrilled to continue our support as Title Sponsor of the ISPS HANDA World Invitational, an event which epitomises our belief in the Power of Sport to unite communities and break down barriers. To see the tournament grow to a European Tour and LPGA sanctioned event is a testament to the importance of providing equal playing opportunities for men and women. I am grateful to the dedication to this cause by all tournament partners; Modest! Golf, Galgorm, European Tour, LPGA and LET.”

Economy Minister Diane Dodds said: “The decision to bring the ISPS HANDA World Invitational back to Galgorm is another ringing endorsement for golf in Northern Ireland. It is wonderful to welcome this innovative tournament which will bring together the best that both the men’s and women’s games have to offer. Following the recent successes of the Open Championship at Royal Portrush in 2019 and last year’s Dubai Duty Free Irish Open at Galgorm, I have no doubt this event will further strengthen Northern Ireland’s reputation for delivering high-profile international competitions.

“It is my hope that the situation with Covid 19 restrictions will improve sufficiently to allow as many spectators as possible to attend the event. However, as the event will reach hundreds of millions of homes across the globe, I am delighted that once again Northern Ireland will get the opportunity to show the world that it is made for golf.”

Niall Horan, owner of Modest! Golf Management, said: “This is a key moment for professional golf in this part of the world, and with the help of ISPS HANDA along with both the LPGA Tour, Ladies European Tour and European Tour we have been able to take the ISPS HANDA World Invitational to a new level, which will, without doubt, reach new audiences around the world.

“The message behind the tournament perfectly aligns with Modest! Golf’s ethos of providing opportunities for all and ensuring golf is a game for everyone. These are vital messages which we plan to further develop with The R&A having recently announced our partnership with them.

“I have been attending European Tour events for as long as I can remember. To host a co-sanctioned LPGA Tour and European Tour event on the island of Ireland gives me so much pride and I cannot wait to return to the amazing Galgorm Spa & Golf Resort this summer, the perfect venue to host such a tournament.”

Keith Pelley, Chief Executive of the European Tour, said: “We are excited to once again work alongside ISPS HANDA and Modest! Golf Management, both of whom share our vision of driving golf further through innovation and inclusivity.

“We thank Dr Handa for his continued support of the European Tour, and also Niall Horan and Modest! Golf Management for their hard work and determination in helping elevate this event after building strong foundations on the Challenge Tour in 2019. Galgorm Castle was a hugely popular addition to our Race to Dubai schedule in 2020 and we are all looking forward to returning there in July.”

Michael Whan, LPGA Commissioner, said: “ISPS HANDA has long been a visionary in how sports can be an agent of change, and now we are excited to help them move to a whole new level and deliver a message of equality to fans in Northern Ireland with the ISPS HANDA World Invitational.

“To have the best women and men compete alongside each other at the same venue for the same purse is exciting for fans and it showcases what is great about this global game.”

Alexandra Armas, LET Chief Executive Officer, added: “Our members are delighted to be playing in this ground-breaking tournament, which marks another significant development for the LPGA-LET joint venture, and I would like to thank all of the sponsors and organisers for their support of our vision and desire to elevate European women’s golf to new heights.

“We are committed to providing more playing opportunities for Europe’s most talented golfers to thrive and flourish and to enable them to reach the highest levels in golf. This tournament offers a unique platform which will no doubt raise the game and inspire more women and girls to take up the sport.”

John McGrillen, Chief Executive of Tourism NI, said: “The ISPS HANDA World Invitational is an exciting opportunity that will deliver significant participant bed nights and positive media attention for Northern Ireland. The exposure will come at a critical time in our recovery, helping to rebuild our tourism economy and bolster consumer confidence. As demonstrated with golfing events last year we can still leverage opportunities for our destination with restrictions in place. Looking further ahead we are very eager to welcome spectators back when it is safe and appropriate to do so.”

A traditional 72-hole stroke play format will be in place with men and women competing at two venues, Galgorm Castle Golf Club and Massereene Golf Club, over the first two days before a halfway cut reduces the field to the top 60 professionals, including ties, in the men’s and women’s draws.

The third round will take place at Galgorm Castle before a further 54-hole cut takes place with the top 35 and ties from the men’s and women’s draws advancing to the final round on Sunday.

Fans can register their interest for tickets and be the first to receive updates by registering online at www.worldinvitational.golf or www.europeantour.com.

A new pro-only pre-qualifier event for men and women will take place ahead of the tournament in June with further details to follow, while Golf Ireland’s Ulster Stroke Play Championship will provide elite amateurs with the opportunity to qualify and compete in this ground-breaking event. Amateurs will be able to enter the Ulster Strokeplay Championship through the Golf Ireland website.

With extensive live coverage via Sky Sports in the UK and Ireland plus international broadcasters globally, the ISPS HANDA World Invitational will enjoy a daily global audience in the region of 640 million, with a unique reach into Asia and North America due to the demand for LPGA coverage in these markets.

Tournament golf has been played at Galgorm for over a decade with the first Northern Ireland Open hosted at the Ballymena venue in 2010. Since then the tournament has evolved and grown every year to now become one of the most visible events in world golf. After last year’s Dubai Duty Free Irish Open, the 2021 ISPS HANDA World Invitational has an exciting new dimension as an LPGA Tour-sanctioned event.

Players will once again compete at Massereene over the first two days. The Fred W. Hawtree designed parkland is one of Northern Ireland’s oldest venues dating back to 1895.

“We are delighted that our home-grown event has been elevated to this level and a special thank you must go to Tourism Northern Ireland, Mid & East Antrim Borough Council, who have been ardent supporters of the event since its inception in 2010,” said Gary Henry, Tournament Promoter and Managing Director Galgorm Castle. “Thanks must also go to Antrim & Newtownabbey Borough Council, Tourism Ireland, Sport NI and Golf Ireland for their continued support. I would like to make a special mention to the hundreds of volunteers who I’m sure will be thrilled and excited for what is to come in July, their ongoing support is invaluable and greatly appreciated.”

The ISPS HANDA World Invitational is now a key driver for the overall Golf Tourism Strategy within Northern Ireland and the island of Ireland. Through international sponsors and stakeholders and extensive global reach, the ISPS HANDA World Invitational is a unique opportunity to connect the NI business community with new networks around the world.