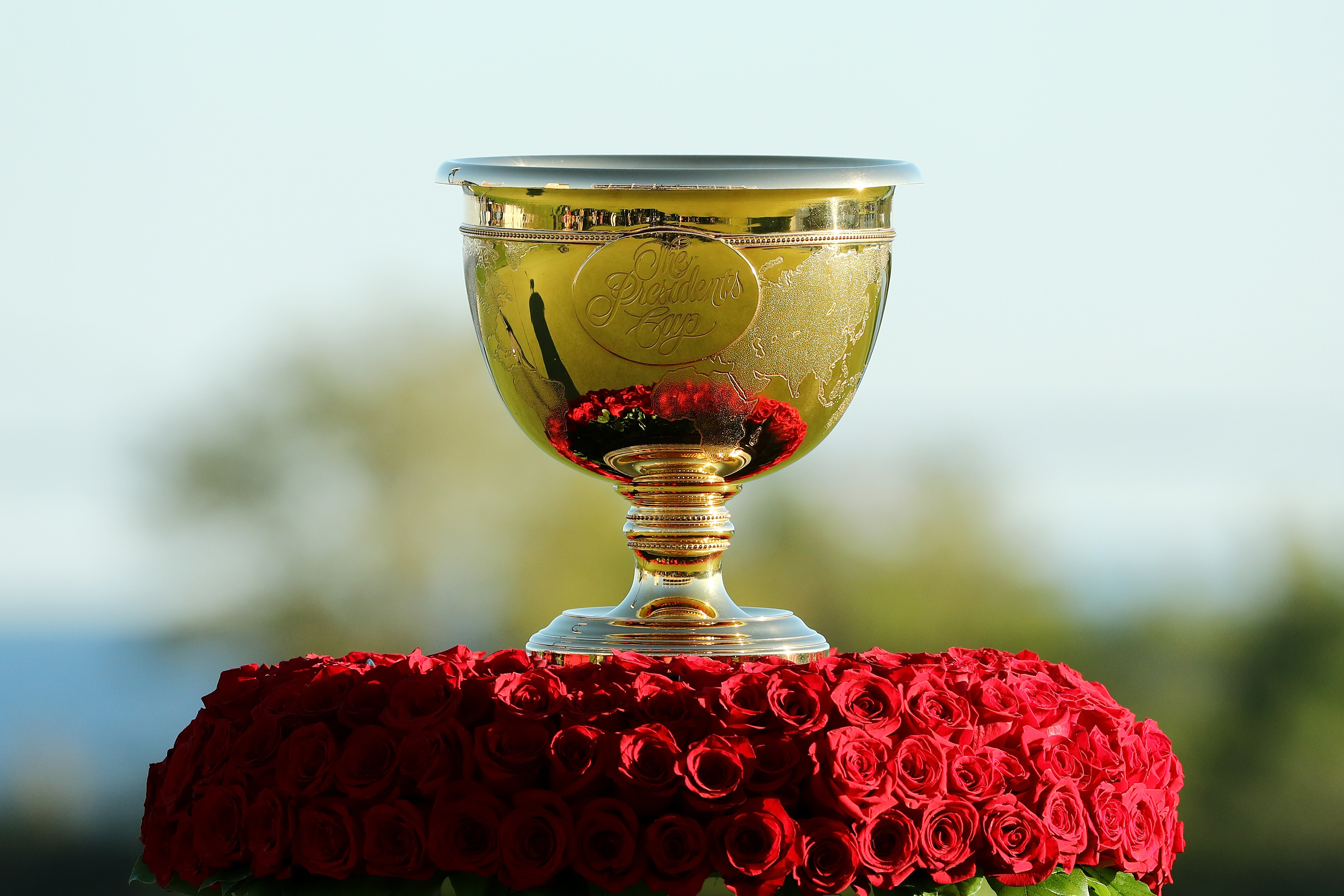 The trophy is displayed prior to its presentation after Sunday singles matches of the Presidents Cup at Liberty National Golf Club on October 1, 2017, in Jersey City, New Jersey. (Photo by Elsa/Getty Images)

The PGA Tour announced recently that Cognizant, a leading professional services company, has been named the third Global Partner of the Presidents Cup, joining Citi and Rolex. The partnership is through the 2026 playing of the event. In addition, Cognizant announced a partnership with the LPGA Tour as title sponsor of the Founders Cup.

By partnering with the Presidents Cup and LPGA Tour, Cognizant will add support for both men’s and women’s golf while increasing its global awareness as the leading technology services partner for its clients. Cognizant will also receive several benefits tied to each tour, including hosting unique client experiences – providing the company with new opportunities to engage with existing and prospective customers.

“As momentum for the 2022 Presidents Cup – one of the premier events on the golf’s global calendar – continues to build, we are thrilled to welcome Cognizant to the family as our third Global Partner,” said PGA Tour Commissioner Jay Monahan. “The announcements with Cognizant regarding the Presidents Cup and the LPGA are overwhelmingly positive signs for future growth of our sport through these impactful partnerships.”

Cognizant’s partnership with the Presidents Cup covers the next three biennial matches, through 2026. The next edition of the Presidents Cup will be held at Quail Hollow Club in Charlotte, N.C., on September 19-25, 2022. The 2024 event will return to The Royal Montreal Golf Club in Montreal, and Medinah Country Club in Chicago will host the 2026 Presidents Cup.

“In our effort to increase the stature of the Cognizant brand and demonstrate our company as the preeminent technology services partner to clients globally, there is significant value in engaging directly with current and prospective clients at the C-Suite level,” said Brian Humphries, CEO of Cognizant (on new partnerships). “Golf is the premier sport for these business decision-makers, and partnering with the PGA TOUR and LPGA Tour provides us with the most distinguished golf platform to create a compelling experience for clients.”

The Founders Cup has become one of the most well attended and celebrated events on the LPGA Tour calendar, paying homage to its rich history and the 13 women – known as the Founders – who created the LPGA Tour over 70 years ago. By signing on as title sponsor of this tournament, Cognizant’s mission is to help the event do more than just commemorate the past, but also showcase the female players of today and their efforts to build a stronger platform for the next generation of golfers. With this goal in mind, the Cognizant Founders Cup will offer a $3 million purse, making it the largest of any LPGA Tour event outside of the majors and the CME Group Tour Championship.

“The Founders Cup began in 2011 as a celebration of our 13 Founders and their visionary dedication to building a better future for the next generation of female golfers,” said Michael Whan, LPGA Tour Commissioner. “I have to admit that this event is personal, as making sure we never forget the grit, commitment and passion of our Founders has always been critically important to me. I’m so honoured and proud to see Cognizant embrace this event and all that it means to young women worldwide. With their involvement, this event will be one of the very best on Tour!”

The multiyear agreement with the LPGA Tour will make Cognizant title sponsor of the Founders Cup beginning in 2021, scheduled to take place October 7-10 at Mountain Ridge Country Club in West Caldwell, N.J. The Donald Ross-designed course has a rich history of women’s golf and credits one-third of all rounds played at the course to female golfers, which is important to Cognizant’s commitment to inclusion and aim to elevate the game of golf for all individuals.