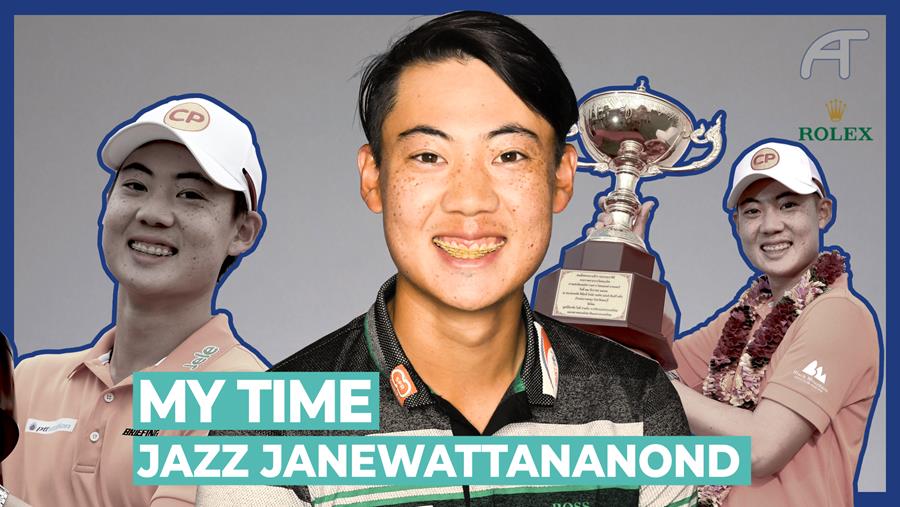 Jazz Janewattananond joins an exclusive club of golfers today when he tees-off in The Masters for the first time but when he first turned professional, a decade ago, thoughts of competing in a Major championship were very far from his mind.

In the latest My Time video in partnership with ROLEX, he reveals just how daunting it was at the start of his career and how he did not know what to expect.

“I turned professional the day before I turned 15. I remember it quite clearly,” says Jazz, now aged 24.

“We just decided to go for it. To try and improve myself. I was so young and I was really naïve.”

“I was just star struck, like a deer in the head lights. I didn’t know what to do but I was there to take it all in and the rest is history,” add the Thai.

Jazz played in a handful of Asian Tour events prior to joining the play for pay ranks and played all four rounds in the Asian Tour International in 2010, making him the youngest player to make the cut on Tour at the age of 14 years and 71 days.

He goes on to explain how difficult the road to the top has been despite his immense talent and gift for the game.

In 2016, he tried his hand on the Web.com Tour (now the Korn Ferry Tour) but when he returned he had lost his playing rights on the Asian Tour.

As is well documented he went into Monkhood in Thailand in January of 2017 in search of focus and direction. And he most definitely found it.

“They [the Monks] just make you see things in a different perspective. Golf is not the biggest thing in your life,” he says.

“Not even a month after that, I won my first Asian Tour tournament. Everything was automatic and things just clicked. When you win that first tournament and get that weight off your shoulders you don’t have anything to prove anymore.”

That event was the Bashundhara Bangladesh Open – which proved to be the catalyst his career was looking for.

Says Jazz: “I didn’t really think I could win an Asian Tour event, I didn’t have the mind set to go and win”.

The following year he won the Queen’s Cup before his remarkable 2019 season when he won four times and claimed the Asian Tour Order of Merit title.

The first of those victories came at the SMBC Singapore Open at Sentosa Golf Club in January.

“It [the SMBC Singapore Open win] is a rush that I never feel before in my life. [My] heart doesn’t beat faster but it beats louder,” says Jazz.

“The weight was lifted off my shoulder, you get through it and come out on top.”

“It was practically unheard of to win four tournaments in a year,” says Cho Minn Thant, Commissioner and CEO of the Asian Tour.

Indeed, there was a slight delay in his progression but that is all a distant memory now as he prepares to play at Augusta – where his phenomenal power and feel for the game could see him challenge despite it being the first time he is playing there.

“I can’t tell my future. I just have to keep working hard,” says Jazz.

“I don’t know how far I can go, but my goal is to be top-three in the world.”