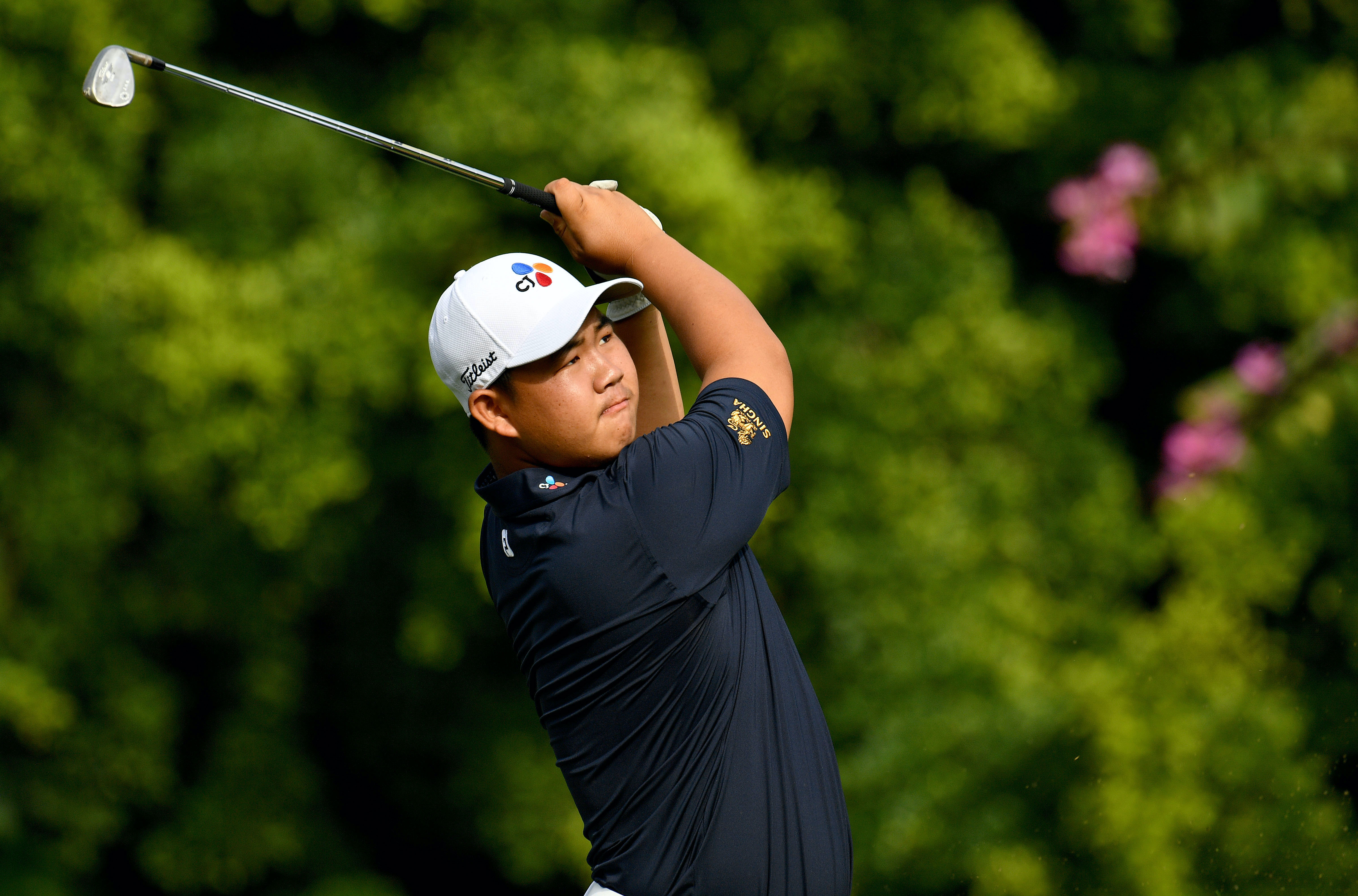 Korean teenager Joohyung Kim is your typical golf nerd – he idolises Tiger Woods, regularly watches the PGA Tour on TV or mobile device and dreams of becoming World No. 1 and a World Golf Hall of Famer.

Some may think he has his head in the clouds but with five professional victories already under his belt at the age of 18, Kim may well be one of the few young golfers to watch in the coming months and years ahead.

This week, he will enjoy another crack on the PGA Tour when he tees it up at the Corales Puntacana Resort & Club Championship starting on Thursday. The Korean phenom knows the road to the top is long and windy but with age clearly on his side, he is prepared for the grind and stay on track to fulfil his childhood dreams.

“I would obviously love to play (fulltime) on the PGA Tour,” said Kim on Tuesday.

Last month, he made his major debut at the PGA Championship, shooting rounds of 70 and 77 which saw him miss the halfway cut at TPC Harding Park. He enjoyed a small consolation by getting a photo with his hero, Woods during a practice day. A few weeks later, he made his first PGA Tour cut at the 2020-21 season opening event, the Safeway Open, where he finished T67 with a 4-under 284 total.

Those experiences have given Kim a better glimpse of the road ahead. “It’s been a journey and I’m just glad to be here and hopefully to play here full time soon. It’s definitely different. The conditions, the greens, the fairways, the rough, it’s all new. And the pin positions as well on the PGA Tour are different from the tours that I play, so it’s a big learning experience for me, a big step and it just shows how good these players are under these conditions.”

Kim was born in Seoul and is the son of a professional golfer, Chang-ik Kim who later became a golf teacher. The family has lived in Australia, the Philippines and China which means Kim is fluent in English and Tagalog (national language of the Philippines) aside from his native Korean language.

When he was five, his father introduced him to the sport and kept it fun before he developed a keen interest and subsequently turned professional in 2018. He has since won three times on the Asian Development Tour and once on the Asian Tour last season and in July, Kim wrote a small slice of history by becoming the youngest golfer to win a Korean PGA TOUR event which propelled him into the world’s top-100.

Kim is absorbing all that he can during this exciting phase of his fledgling career. “To be honest, I follow all the guys on Tour. That’s why I watch a lot just because, I don’t know, for me golf has always been in my blood. I’m always trying to get better, so 90 percent of it is golf. I watch all these guys play. I’m a bit of a golf nerd, so I know a lot about these players. I study a lot about them, I still do,” he said.

“I’ve always been a huge fan of Tiger just because ever since I started golf, I think the first golf tournament I watched was Tiger winning the Masters, I think. And actually, I saw him in Australia when I was like six. He came to Australia at that time and I remember he was like a foot away from me and I was wearing his cap that was too big for me, but I wanted to wear it just because it was Tiger’s cap. I was shouting “Go, Tiger” and got a tip of the cap. It was pretty fun,” said Kim.

“He’s been so dominant all these years and it’s pretty cool what he’s done for the game and how he’s impacted golf. So, I’ve always looked up to him. And it’s pretty cool that I met him in the PGA Championship, and I was able to take a good souvenir picture with him. Yeah, he’s always been a huge idol of mine.”

Kim isn’t afraid to state his long-term career goals in a sport which is flooded with superstars and talents from the U.S. and around the world. “I really would love to be World No. 1. That has always been like a goal just because Tiger Woods was so dominant as World No. 1 for so many years. … win all four majors, be in the Golf Hall of Fame, just those big things I always would love to achieve. I’ve had that mindset ever since I started playing golf, so it’s always with me.”

Interestingly, Kim’s English name is Tom, which was given to him as he enjoyed watching the cartoon series “Thomas the Train” when he was child. “I had the whole thing, I had the lunchbox, I had the toys, yeah,” he laughs.

“Actually, it (name) was actually Thomas. As I grew older, some people started calling me Tom and I thought it was just shorter and just more simple. I think by the time I was like 11 I went just by Tom. And my family calls me Tom as well.”