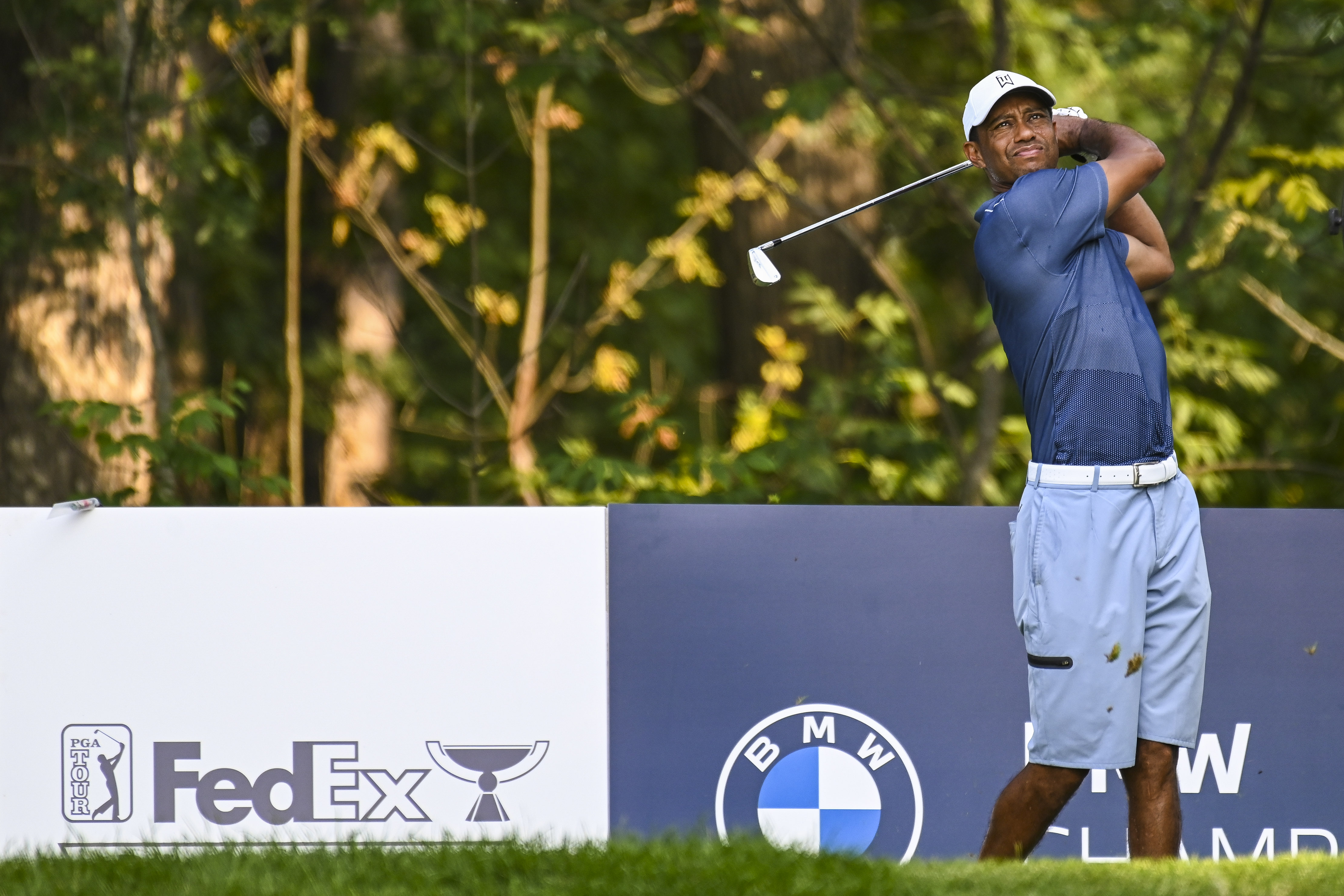 Tiger Woods plays his shot from the 17th tee during a practice round for the BMW Championship on the North Course at Olympia Fields Country Club on August 25, 2020, in Olympia Fields, Illinois. (Photo by Keyur Khamar/PGA TOUR via Getty Images)

The stakes are simple this week for Tiger Woods. Finish fourth or better at the BMW Championship and he will once more qualify for FedExCup Playoffs finale, the TOUR Championship and a shot at a record-breaking 83rd PGA Tour victory.

Anything less than that, and the 44-year-old will be watching the competition at East Lake Golf Club from his couch.

“I have to play well. I have to earn my way to East Lake,” Woods said Wednesday. “I haven’t done so yet, and need a big week this week in order to advance. If I don’t, then I go home. This is a big week for me. I’m looking forward to getting out there and playing and competing.

“This golf course is set up more like a U.S. Open than it is a regular TOUR event, but this is the Playoffs. It’s supposed to be hard.”

Woods arrives here at Olympia Fields Country Club at No. 57 in the FedExCup standings. Only the top 30 will advance to the season finale in Atlanta, and the numbers indicate that Woods will likely need to finish inside the top five in order to qualify. Of course, that wouldn’t be unusual for Woods, who has carded 10 career top-five finishes in Playoffs events, including that unforgettable victory at East Lake in 2018 when Woods erased a five-year winless drought.

Only Dustin Johnson has more top-five finishes all time in the postseason, earning his 11th last week when he lapped the field at The Northern Trust.

“If you look at the players from 1 to 30, they’re the most consistent players throughout the entire year,” Woods said. “Granted, some players have had more success towards the late part of the year, but most likely in order to get to East Lake you’ve got to be consistent, and in order to win the Tour Championship and to win the FedExCup, it’s about getting hot at the right time and right at the very end just like everybody else will.”

Woods is a five-time winner of the BMW Championship, with two of those wins coming in the FedExCup era. But this week marks his first start at Olympia Fields since tying for 20th at the 2003 U.S. Open.

“I probably remember maybe a couple shots from that Open,” Woods recalled. “I went on YouTube and took a look at the golf course and the tournament setup, but it looks completely different. There are a lot more trees, the tees have been pushed back 50 yards, 60 yards on some of the holes. It was a very different type of layout. Guys were hitting a lot of irons off the tees and putting the ball in play. It’s going to be a little bit that way this week but we’re further back.”

Of course, Woods was in this exact position a year ago, too. Needing a finish of solo 11th or better last year at Medinah, a place where he has won two majors, Woods instead posted consecutive 1-under 71s to open the tournament before finishing tied for 37th.

Standing in Woods’ way are thee of the top five players in the world—Johnson, defending champion Justin Thomas and Rory McIlroy, among others.