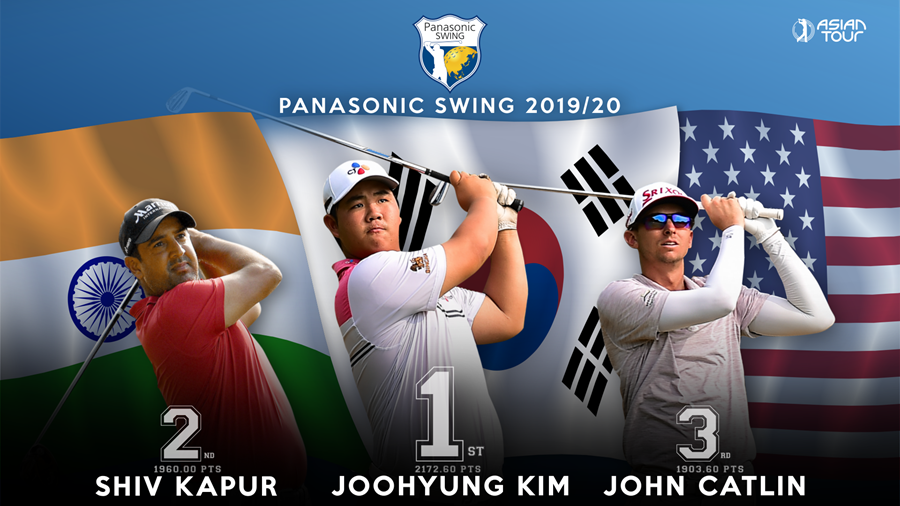 Teen sensation Joohyung Kim of Korea has been proclaimed the winner of the 2019/20 Panasonic Swing after officials decided to conclude the third edition of the series following the cancellation of the Panasonic OPEN Golf Championship which was slated to take place in Japan this September.

The Panasonic Swing, a ranking based on aggregate points earned by players at selected tournaments across Asia, was originally planned to span across events in five countries, with the top-three finishers sharing a total prize purse of US$150,000 via a bonus pool reward scheme.

Disruptions caused by the ongoing COVID-19 pandemic, however, have forced officials to conclude the 2019/2020 Panasonic Swing where the top-three winners will now be decided based on points accumulated from three events – 2019 Thailand Open, 2019 Panasonic Open India and 2019 BNI Indonesian Masters. The total prize purse has also been adjusted accordingly to US$90,000.

Kim, who turned 18 years old last month, will take home a bonus prize of US$50,000 after sealing the top spot with a total of 2,172.60 points. Kim claimed a notable tied-sixth finish at the Thailand Open, where he made his second Asian Tour start last season and first after securing three victories on the Asian Development Tour the same year.

The talented Korean went on to clinch a sensational breakthrough at the Panasonic Open India a week later, becoming the second-youngest professional to win on the Asian Tour at the age of 17 years and 149 days.

He would then conclude his dream rookie season with a tied-21st place finish at the BNI Indonesian Masters, which has now become the third and last leg of the 2019/20 Panasonic Swing.

“I’m thrilled to win the Panasonic Swing. It has been a solid run for me. I would like to thank everyone who has helped me in my journey so far. A big thank you to Panasonic for their support as well. This is a great boost to me. I will continue to work hard,” said Kim.

Kim’s amazing run spilled over to the 2020 season, where he secured back-to-back top-five finishes in four starts to sit in sixth place on the current Order of Merit.

His fourth-place result at the SMBC Singapore Open earned him a coveted spot at The 149th Open, which will now be held at Royal St. George’s in 2021.

His Major debut, however, came earlier than expected as he is now set to tee up in the PGA Championship next week, thanks to his first victory on home soil which saw him break into top-100 on the Official World Golf Ranking (OWGR) earlier this month.

India’s Shiv Kapur, winner of the inaugural Panasonic Swing, came in second with 1,960 points while American John Catlin took third place with 1,903.60 points. They will take home prize purses of US$25,000 and US$15,000 respectively from the reward scheme.

Cho Minn Thant, Commissioner and Chief Executive Officer of the Asian Tour, said: “Panasonic has always been a great supporter of the Asian Tour. We are very thankful for their continued commitment and contributions in promoting professional golf across the region despite the challenging circumstances the world is experiencing in 2020.

“It’s unfortunate that we have to shorten the third edition of the Panasonic Swing but I believe the long-lasting partnership we have forged over the years will continue to grow as we strive for more collaborations in future seasons.”

Tetsuro Maruyama, Head of Secretary Office at the Panasonic OPEN Golf Championship, said: “We would like to congratulate Kim on winning the 2019/20 Panasonic Swing. Kim’s a really talented player and his performance has been impressive. We wish him continued success and we believe he will become a world-class player soon!

“Although the 2019/20 Panasonic Swing was forced to be shortened, we are very pleased to stage three successful editions with the Asian Tour. Not only did we witness exciting golfing action, but we also did our part to support the players and promote the game of golf across the region.  Furthermore, we are confident that sport always create a better life and a better world for people.

“We would like to thank the Asian Tour and their players for their participation. We look forward to the day when we can play and enjoy the game peacefully again.”

For full rankings of the 2019/20 Panasonic Swing, please click here.