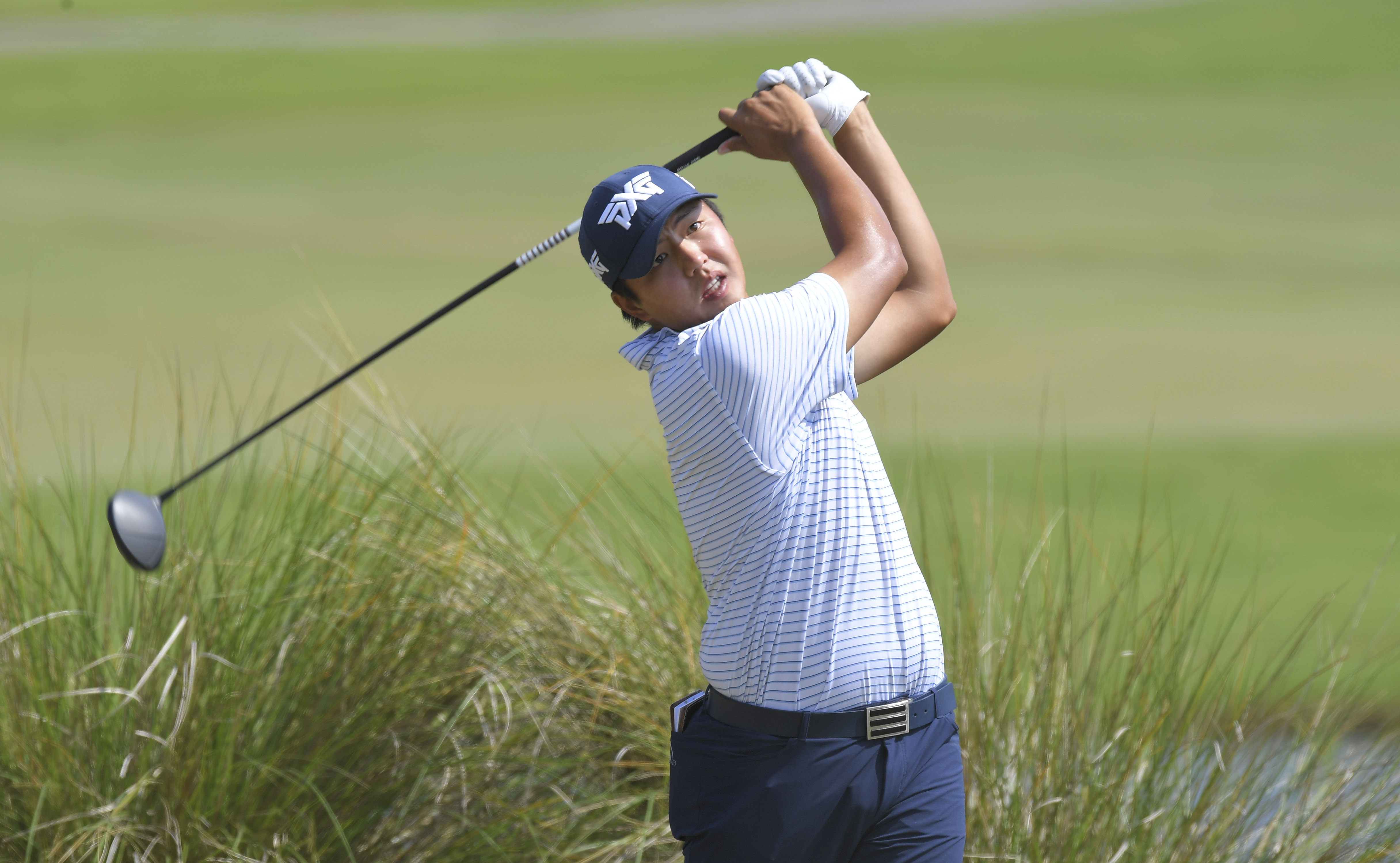 KK Limbhasut of Thailand plays a tee shot on the eighth hole during the first round of the Korn Ferry Tour’s The King & Bear Classic at World Golf Village on the King & Bear Golf Course on June 17, 2020, in St. Augustine, Florida. (Photo by Stan Badz/PGA TOUR via Getty Images)

A decade ago, Thailand native KK Limbhasut came to America with his father, four suitcases and no real plan – other than wanting to play professional golf.

Limbhasut (the Ks stand for Khem Khon) was 14 when he touched down in Los Angeles not knowing what was next. He and his father, who had introduced him to the game five years earlier, were planning to go to San Diego but ended up in Loma Linda – about 90 minutes east of Los Angeles’ international airport. There, a family friend helped them to move in and get settled.

At 14, he was away from his mom and sister and looking back now, he admits it was tough. But he came with a dream, and it’s now very nearly fulfilled.

Limbhasut started the 2020-21 Korn Ferry Tour season with just conditional status, but after a T12 result at the El Bosque Mexico Championship by INNOVA, followed three months later by a T10 at the Korn Ferry Challenge at TPC Sawgrass, he has bolstered his position in the reshuffle entering a busy summer stretch of the schedule.

“I’m just really glad to be back and playing full time,” said Limbhasut after the approximately three-month pandemic hiatus.

Born in Bangkok, Limbhasut started playing golf as an 8-year-old, enjoying rounds with his family. He said his dad played a lot of golf, but it quickly became something his whole family would do.

“If (my dad) was going to play golf by himself, he’d be gone for half a day. Instead of doing that, he would tell my mom and me to pick up the game and we could all play together,” said Limbhasut.

“That’s how it all started.”

One day, Limbhasut recalled, he went to the course with his dad and played with a competitive junior golfer. It was the first time Limbhasut thought that someone else was really good and it was ‘cool’ to play golf.

“That’s why I wanted to play tournaments,” said Limbhasut, who was 9 at the time. Five years later he and his dad wanted to pursue both education and competitive golf together. That system, Limbhasut said, doesn’t exist in his native Thailand.

Although he grew up around many of the other Thai names in professional golf these days –and Kiradech Aphibarnrat on the PGA Tour and the Jutanugarn sisters on the LPGA Tour (“She is amazing,” said Limbhasut of Ariya Jutanugarn, former world No. 1) – there wasn’t an opportunity for him to both get a great education and play golf at a high level. It was one or the other, he said.

He spent two summers playing golf tournaments in the U.S. before moving to California full-time, and Limbhasut said there was a culture shock when he first came to America. He went to a private international school in Thailand, so he learned English, but it’s not unlike how Spanish is taught in the U.S. – it would be rarely outside the classroom. He was among a class of 30 in Thailand, and at his public-school in California, he was one of approximately 700.

But he got adjusted, making friends on the golf course and tracking down some solid Thai restaurants. “It took a while,” he jokes.

He was comfortable in California. When it came time to choose a college, he wanted to stay in the state and specifically join a Pac-12 school. That meant UCLA, USC and Cal-Berkeley were tops on his list. Limbhasut decided on Cal, where he met future Tour winner – and fast friend – Collin Morikawa.

Morikawa, who has made 22 consecutive cuts including securing a victory to begin his PGA Tour career as a pro, said their friendship grew when Limbhasut finished runner-up to him at the 2016 Sunnehanna Amateur.

“We’ve been super close for a while and we talk almost every day. We talk like he’s my brother,” said Morikawa. “It’s awesome to see players that are my age, who I know really well, play well on the Korn Ferry Tour and hopefully, make their way out here.

“You see the relationships guys (on the PGA Tour) have and they’re really close. And yeah, I’ve got a handful of friends out here but I’m not as close with them as I am with KK.”

We’ve been super close for a while and we talk almost every day. We talk like he’s my brother.

Limbhasut said he and Morikawa – who majored in business together – learned a lot from one another. They kept pushing each other to be the best player in college they could be. They competed, Limbhasut said, in everything – not just golf. And they practised together almost every day because they had the same class schedule.

Morikawa describes Limbhasut as “super consistent,” with a “deadly” short game. The Tour winner said he spent almost every day during their college tenure trying to learn from Limbhasut on his short game.

“That’s where he’s going to score. When he has shorter courses and he can hit short irons, that’s when he’ll go really low,” said Morikawa. “But he’s an awesome guy, just really mellow and a really nice guy.”

Don’t be fooled by that nice-guy persona, though. Limbhasut wants to win, and he wants to get to Morikawa’s level. “We kept pushing each other to be the best golfer in college as we could, and we both have done pretty good,” said Limbhasut. “He’s on the PGA Tour doing some pretty big stuff, but I’m on the Korn Ferry Tour, which is not too far from where he is.”

And Limbhasut, despite coming to America full of unknowns, is now just one step away from achieving his ultimate goal: getting on the PGA Tour and joining Morikawa.

As it turns out, the journey from Thailand to the Tour isn’t too far at all.