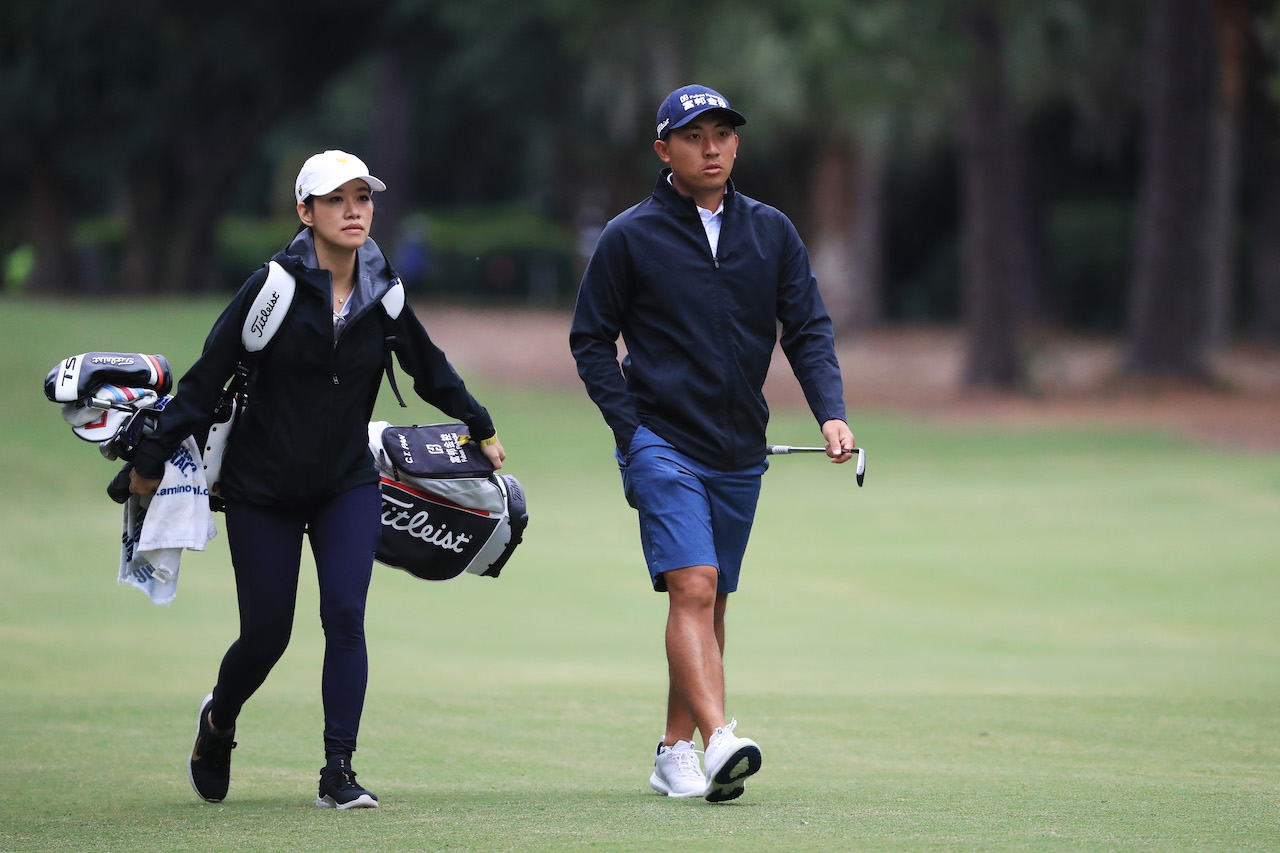 C.T. Pan of Taiwan and his caddie and wife Michelle walk during a practice round prior to the RBC Heritage on June 16, 2020, at Harbour Town Golf Links in Hilton Head Island, South Carolina. (Photo by Streeter Lecka/Getty Images)

It was arguably the biggest week of C.T. Pan’s professional golf career, and his wife, Michelle, wasn’t there to see it.

It was a Sunday afternoon at the 2019 RBC Heritage, and Pan was surging down the stretch on the back nine at Harbour Town Golf Links. But his wife was halfway across the country in Houston, Texas, hosting the inaugural C.T. Pan Junior Championship at The Clubs of Kingwood.

Pan was supposed to be there, too, but Michelle urged him to play the RBC Heritage instead. He ended up winning his first career PGA Tour event that day, grabbing the lead with a birdie at the 16th hole before gutting out a pair of pars to beat Matt Kuchar by a stroke.

Michelle didn’t plan on missing any potential repeat performance this year. She will serve as his caddie this week in Pan’s first career attempt at a title defence.

“This morning I played the back nine … and I told her how I played each hole and even each shot,” Pan said Tuesday. “I even showed her where the hole locations are and the birdie putt on 16, the par save on 17 from the top bunker, and 18 where I hit a great shot, the approach shot to 15 feet. So that was really fun to go through that again and having her inside the ropes and caddying for me because she wasn’t here last year. So, it’s great to be back.”

A similar showing this week would be welcome news to the 28-year-old, who has carded just one top-25 finish in 11 starts so far this season, a tie for 11th at the Mayakoba Golf Classic in November. He arrives in Hilton Head having missed the cut in each of his last three starts dating back to early February, including last week at the PGA Tour’s return at the Charles Schwab Challenge. He shot 72-70 to miss the weekend by four strokes.

“Even though I only played two days, my iron play, my approach shots at the greens and around the greens, I did very well,” he said. “I think I was ranked at 20-something place after two rounds. The driver was my weak point last week, but I think this week I’ll work on that. In addition to that, this course fits my eyes really well, like all the tee shots. So, I think that will be really helpful to me.”

The Presidents Cup International Team member has been eager to return to competition since the sport shut down in March due to the COVID-19 pandemic. But he still kept busy during the hiatus, setting up an indoor driving range in his garage and creating a YouTube channel to share golf tips with fans.

He and Michelle also purchased a Recreational Vehicle (RV) to travel in from tournament to tournament in to lessen the risk of potentially catching the virus. He drew headlines in March after withdrawing from The Players Championship, citing safety concerns before the event was ultimately cancelled.

“I think the tour has put out so much effort the last two months to create a safe environment for us to play,” he said. “Last week, I was totally impressed by how they did things. The testing is impressively quick and easy. The social distancing, they’re still doing that. And the grab and go meals, that’s something I suggested them to do, and they said that’s great, that they would do that.

“I think they’re trying to follow the rules just like everyone else out there, and hopefully, they will be the model for NBA and MLB and for them to proceed to their next steps. So far, I’m very impressed about how the PGA Tour has handled this.”

Pan initially believed he wouldn’t get the chance to defend his title at Harbour Town, as the RBC Heritage was initially cancelled during the Tour’s 91-day hiatus. It was ultimately rescheduled in April without fans.

That’s welcome news for Pan. A familiar place might just be what he needs to get his game trending in the direction. And his wife will be there to see it.

“When they announced the new schedule, it was quite a surprise to me that the RBC Heritage was the second event,” he said. “I was really happy to see that. My wife and I, we love this place. We love coming back here.”