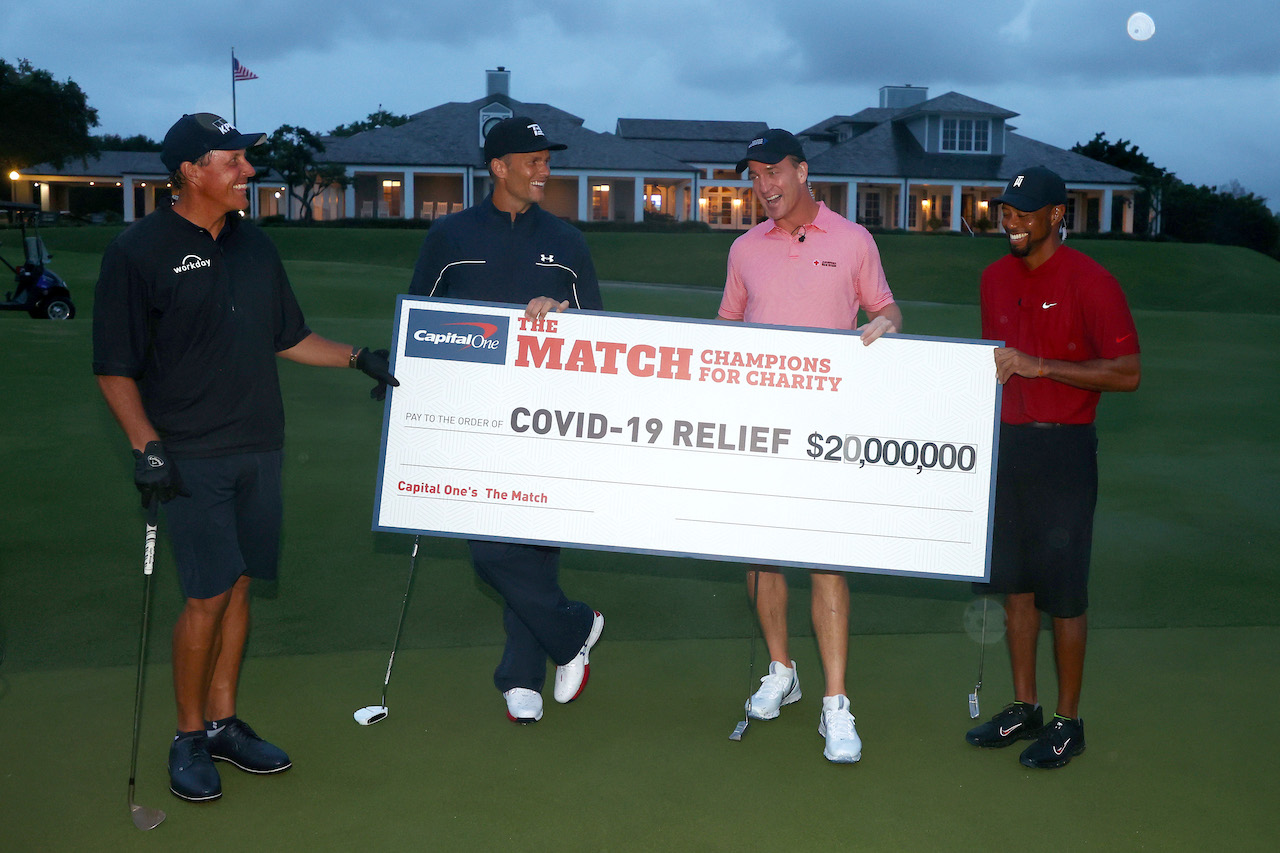 HOBE SOUND, FLORIDA – MAY 24: Tiger Woods and former NFL player Peyton Manning celebrate defeating Phil Mickelson and NFL player Tom Brady of the Tampa Bay Buccaneers on the 18th green during The Match: Champions For Charity at Medalist Golf Club on May 24, 2020, in Hobe Sound, Florida. (Photo by Mike Ehrmann/Getty Images for The Match)

Tiger Woods has gotten the better of Phil Mickelson once more.

Playing on his home golf course, the 82-time PGA TOUR winner built an insurmountable advantage over the first six holes before fending off a late rally to beat his longtime rival Mickelson, 1-up, in Capital One’s The Match: Champions for Charity.

A total of US$20 million was raised for COVID-19 relief efforts in the team match-play event that featured Woods and Mickelson playing alongside National Football League (NFL) stars, Peyton Manning and Tom Brady.

“The fact that we all came together and were able to raise this money for those who have been severely impacted (is great),” Woods said. “Tom and Peyton, hats off to them for coming out. This is our arena, and this is what we do. We couldn’t imagine going on the football field and doing what they do.”

Woods and Mickelson have finished first and second nine times over the course of their famed rivalry on the PGA TOUR, and those fireworks were once again on display Sunday at Medalist Golf Club.

And while the two Hall of Fame players headlined the star-studded event, 2017 FedExCup champion Justin Thomas chipped in as the on-course reporter while Brooks Koepka called into the telecast to donate money to the cause, which also included player-themed golf cars and competitions that included long drive and closest-to-the-pin challenges.

“It was an honour for Tom and I to be invited to play in this match and it will always be something I remember and cherish,” Manning said.

Woods and Manning were 3-up after a strong front nine that began with a birdie from Woods at the par-5 third. The advantage doubled at the ensuing par-3 when Manning poured in a birdie, which was set up by an impressive tee shot from Woods that landed inside nine feet. The duo earned one final win at the sixth when Manning two-putted from the fringe.

But Mickelson and Brady’s fortunes began to turn around after moving to the back nine when the format shifted from four-ball (best-ball) to modified alternate shot. The pair won their first hole when Mickelson drove the green at the 342-yard 11th and Brady connected a long-range putt for eagle, then added another at the 14th when Manning’s 2-foot par putt lipped out.

“My man hit some really great shots on the back nine,” Mickelson said of Brady, who had the shot of the day with a hole-out from the fairway at No. 7. “We fought hard to make up the (deficit) on the front. I was a little nervous, really tight. But he really shined and hit some great shots and we made a run, came really close.”