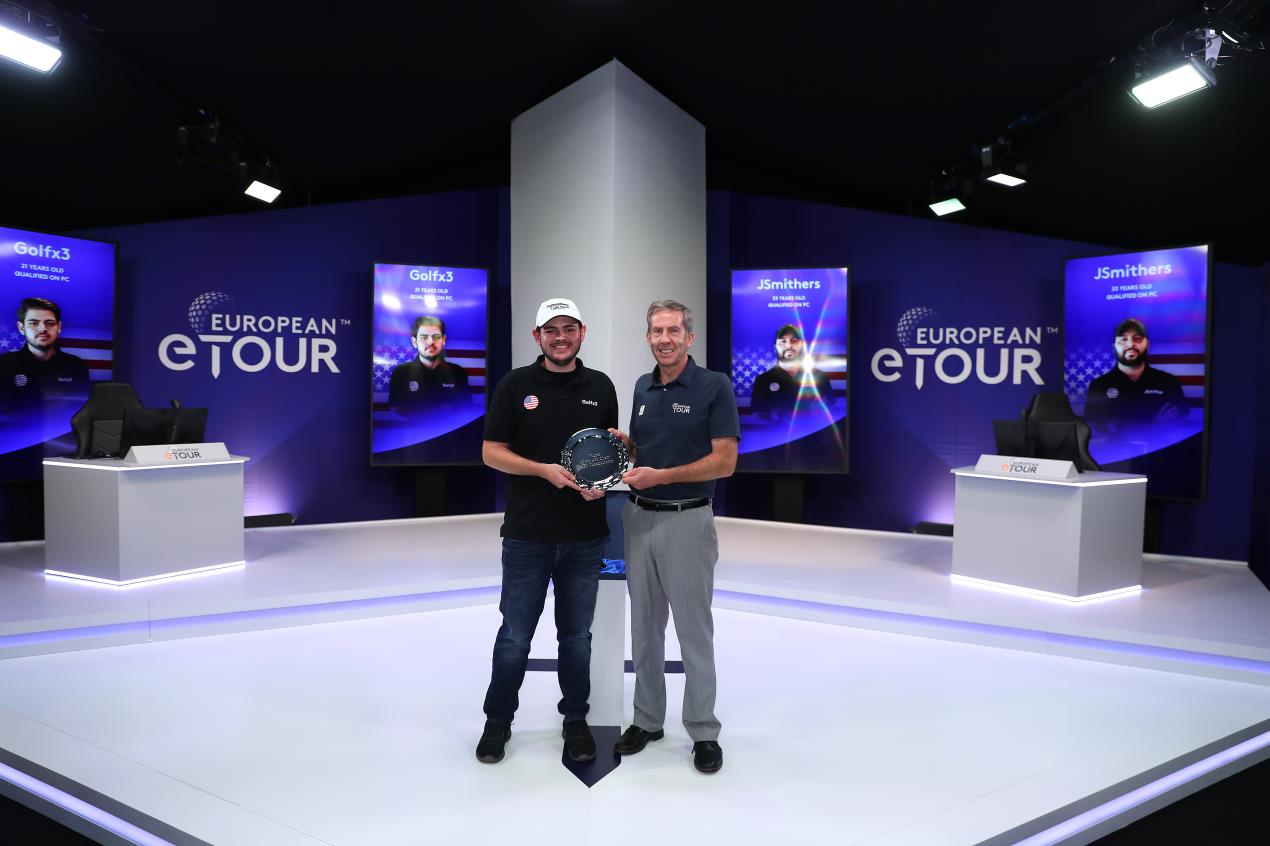 American Payton Gordley defeated countryman Joshua Smith to take the trophy and US$5,000 winners’ cheque in the first event of the inaugural European eTour Series, held in a specially constructed venue in the public village at the Abu Dhabi HSBC Championship presented by EGA.

Of those 45,000 entrants, a total of 128 players carded scores of 60 or below in the first qualifying round and progressed to the next stage – a bracket-style knockout competition played on the leading online and mobile golf game, World Golf Tour (WGT) by Topgolf.

Following intense competition played in the difficult conditions setting over Merion Golf Club and Chambers Bay Golf Club, eight players earned their spots onsite at Abu Dhabi Golf Club to compete in two round-robin groups, before straight knockout semi-finals and the final, with Gordley and Smith battling it out for first place.

Golfx3 (Gordley’s screenname), who participated in a one-off esports event held at last season’s Made in Denmark presented by FREJA, took the lead at the third hole from JSmithers (Smith’s screenname) playing the Wolf Creek Golf Course and showed no signs of weakness.

“I feel surprised and relieved – a lot of mixed emotions,” said the 21-year-old. “I almost gave the match away and I’m just grateful that I ended up coming through and winning at the end.

“I was jokingly saying that I was going to use the prize money to buy the gold putter on the game, but realistically I’ll probably use it for my college tuition.

“I’ve probably got finals in November, but I’m looking forward to Dubai. It’s the first European eTour final and I couldn’t be more excited.”

Among those participating on stage for a total prize pool of $10,000 in the public village at the first Rolex Series event of the year were gamers from Germany, Romania, Spain, United Kingdom and the United States of America.

DreamHack will bring their extensive esports events and streaming production capabilities to create a premium experience. Fans will be able to enjoy extensive live coverage as well as bespoke ancillary content of the maiden event across a multitude of platforms, including broadcast, digital and social media.

As champion, Gordley is the first player to qualify for the global finals at the DP World Tour Championship, Dubai at Jumeirah Golf Estates from November 19-22, 2020. He will be joined by the champions from the next four European eTour events, set to take place at European Tour tournaments across the globe in the coming months, alongside three wildcards, who will compete for a bumper prize pool of $50,000.

The esports industry is one of the fastest growing media sectors with an audience of more than 380 million enthusiasts worldwide which is forecasted to surpass 1.6 billion by 2022. A majority of esports fans are in the 18-34 age demographic.