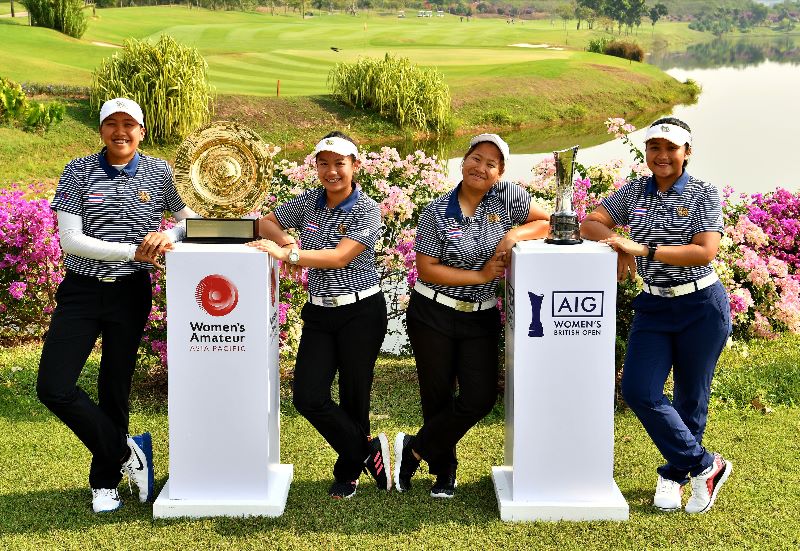 World number 19 Jaravee Boonchant will lead the Thailand contingent when the Women’s Amateur Asia-Pacific championship (WAAP) comes to The Land of Smiles for the first time next month.

The third edition of the region’s premier women’s championship will be played at Siam Country Club in Pattaya from 12-15 February.  The 2020 WAAP champion will earn starts in two women’s major championships – the AIG Women’s British Open and The Evian Championship – as well as invitations to the Honda LPGA Thailand, the Hana Financial Group Championship and the Augusta National Women’s Amateur (ANWA).

In front of their home fans, they will try to follow in the footsteps of Atthaya Thitikul, who created history at Singapore’s Sentosa Golf Club in 2018 by winning the inaugural championship after a four-way play-off.

Thitikul, who became the first non-Japanese Asian player to be ranked number 1 in the World Amateur Golf Ranking (WAGR) last year, also finished runner-up in the second edition in Japan.

The 20-year-old Boonchant, majoring in Statistical Science at Duke University, one of US college golf’s most prominent teams, said the success of Thitikul, as well as that of the Jutanugarn sisters – Ariya and Moriya – on the LPGA Tour, have been huge motivating factors.

“Seeing their successes motivated me to work harder and become better. Hopefully, one day my name will be next to theirs. I truly hope to play many tournaments alongside them in the future,” said Boonchant, who will be making her WAAP debut.

“I have always wanted to play WAAP since its inaugural edition but the timing never seemed to work with my academic and college golf schedule. This year, I finally have the opportunity to participate and I’m really looking forward to it.

“It has also been a very long time since I played a tournament in Thailand in front of my friends and family. That’s another reason to be so delighted and excited to play the WAAP this year.”

Boonchant is eager to get back on the golf course with a scorecard in her hand. She played just three collegiate events in the US in September, finishing inside the top six in the last two, after a three-month break in June 2019 for an internship.

“I decided to dedicate my summer to extra-curricular activities to broaden my vision of the world and grow as a person. I was able to be one of the students in the ‘Duke Study Abroad in Japan’ programme for two months and then do an internship in Thailand later,” said Boonchant, winner of the 2018 ACC Championship.

“During that time, I got to play just one round of golf and maybe practised three or four times. I have to admit that it was nice to take a break from golf and explore other aspects of life. However, those three months also made me realise how much I missed playing golf and I really want to be back competing.

“Going into the off season, I was pretty happy with how I was playing. I am currently working on my swing with my coach, just making sure that all the pieces come together as I get closer to the WAAP.”

Boonchant is confident Thailand golf will benefit immensely by hosting a championship like the WAAP.

“The WAAP truly means a lot to me personally. It is a great event where top players in the world compete and showcase the great game of golf and its potential. I think it is important for Thailand to host such an event because these players will be able to inspire the next generation of young Thai golfers,” she added.

“The WAAP is such an amazing and fun event. The fans will surely enjoy themselves while supporting the growth of women’s golf.”

The WAAP, developed by The R&A and the Asia-Pacific Golf Confederation (APGC) to unearth developing talent and provide a pathway for Asia’s elite women amateurs to emerge on the international stage, will be supported by the Tourism Authority of Thailand (TAT).

Martin Slumbers, Chief Executive of The R&A, said, “Thailand has a strong presence in golf and there have been a number of men and women players who have excelled at the highest level of the sport. We are delighted to bring the Women’s Amateur Asia-Pacific championship here and continuing to inspire other potential future champions in Thailand and throughout the Asia-Pacific region.”

The highest-ranked player in the field is Chinese Taipei’s No. 9 Yu-Chiang Hou, the younger of the two Hou sisters in the field. The field comprises 12 players ranked inside the top-100 of the WAGR, with Chinese Taipei accounting for three of them; Yu-Sang Hou, No. 39 and Chia Yen Wu, No. 47.

The youngest player in the field is the 14-year-old Maribel Ting from Malaysia, while the oldest is 27-year-old Rotana Howard from the Cook Islands.

The par-72, 6,608-yard Waterside Course of Siam Country Club is sure to provide an exciting challenge for the field. The golf course has received several awards in the past, with the most recent being the Best Golf Course in Thailand at the Asia Pacific Award last month. The Old Course at the club, the second oldest golf course in Thailand, was ranked 73rd in Golf Digest’s Top-100 Golf Courses in the World in 2018.

Entry to WAAP will be free of charge for fans.

The championship will be broadcast live on each of the four days. There will be nearly 600 hours of television coverage broadcast to more than 180 million households.