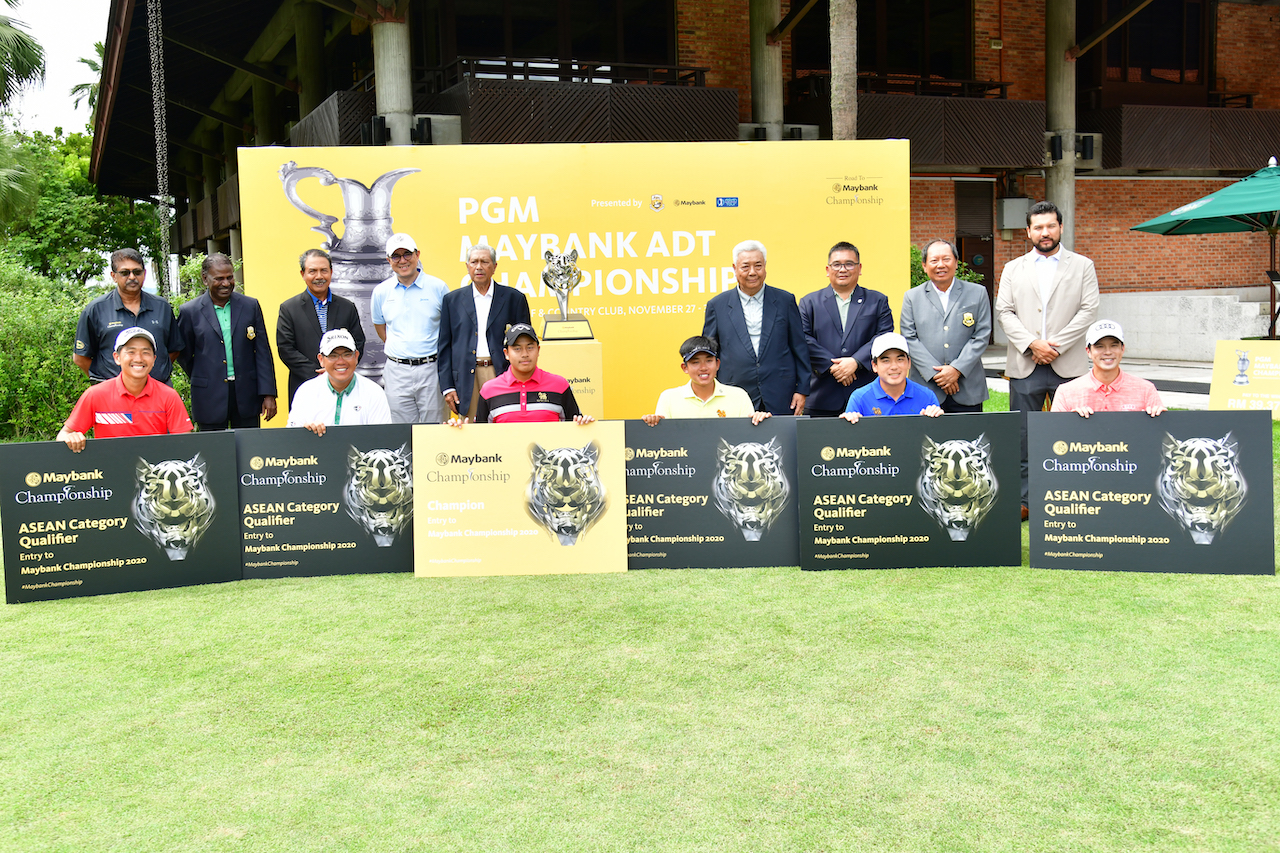 Six golden tickets were handed out to some of the region’s leading golfers, who have received entry into the upcoming Maybank Championship.

This year marked the first time that the PGM Maybank ADT Championship, co-sanctioned by the Professional Golf of Malaysia (PGM) Tour and the Asian Development Tour (ADT), served as the qualifying event for the ASEAN category spots for the lucrative Maybank Championship. The deserving players were offered coveted spots at the Asian Tour and European Tour co-sanctioned tournament after finishing as the top five ASEAN players as well as the winner at the PGM Maybank ADT Championship, held from 27 to 30 November 2019.

The six places have been handed to the outright winner of the tournament, Thailand’s Nirun Sae-Ueng, and five players from the ASEAN region; namely, Atiruj Winaicharoenchai and Suttijet Kooratanapisan from Thailand, Singaporeans Choo Tze Huang and Quincy Quek, and Indonesia’s George Gandranata.

“I didn’t expect to win but I am very happy that I did,” said the 24-year-old Nirun, who also won the PGM Sabah ADT Masters in 2017. “I came here with one mission – to qualify for the upcoming Maybank Championship, so to get that and finish on top was amazing. It has always been a dream of mine to play at the Maybank Championship.”

With a US$3 million purse, the Maybank Championship is now the biggest and most lucrative golf tournament in ASEAN, whose past winners include Australians Marcus Fraser (2016) and Scott Hend (2019), Paraguay’s Fabrizio Zanotti (2017) and Asian Tour Order of Merit champion Shubhankar Sharma (2018).

The ASEAN category, introduced in 2017 as part of Maybank’s initiatives and efforts to elevate regional talent, provides a platform for the players to take their game to a new level, whilst giving them a chance to pit their skills against some of the world’s best.

“We want to make the ASEAN dream a reality, both on and off the fairways,” said Datuk Abdul Farid Alias, Group President and CEO of Maybank.

“By reserving spots for the five ASEAN players at the upcoming Maybank Championship, we not only recognise deserving talent but also encourage a thriving and competitive ASEAN golfing landscape that will grow into a global stage. Together with support from the Tours, we hope to nurture a league of champions for this generation and those to come.”

“We also want to recognize the winner of the PGM Maybank ADT Championship and provide him the platform to accelerate to the next level in his career,” added Datuk Abdul Farid.

Asian Tour Commissioner and Chief Executive Officer Cho Minn Thant applauded Maybank’s continued support of the development of golf in the region, and in particular Malaysia.

“I would like to thank Maybank for their unwavering support in growing the game of golf in the region – not only this season but over the years,” he said.  “The ADT itself has proven to be a great platform for budding golfers to hone their skills and work their way onto the Asian Tour proper, and now the Maybank Championship which is co-sanctioned with the European Tour.

“The PGM Maybank ADT Championship is a great occasion for ASEAN players and all the other ADT hopefuls to try and compete in the Maybank Championship, which is one of the most celebrated events on the Asian Tour,” added Cho.

He said that players who had previously competed in the Maybank Championship under the ASEAN umbrella proved to be no pushovers. Indeed, Angelo Que of the Philippines and Indonesia’s Danny Masrin did a good job to impress earlier this year. They were tied-25th and joint-36th respectively in the tournament in March.