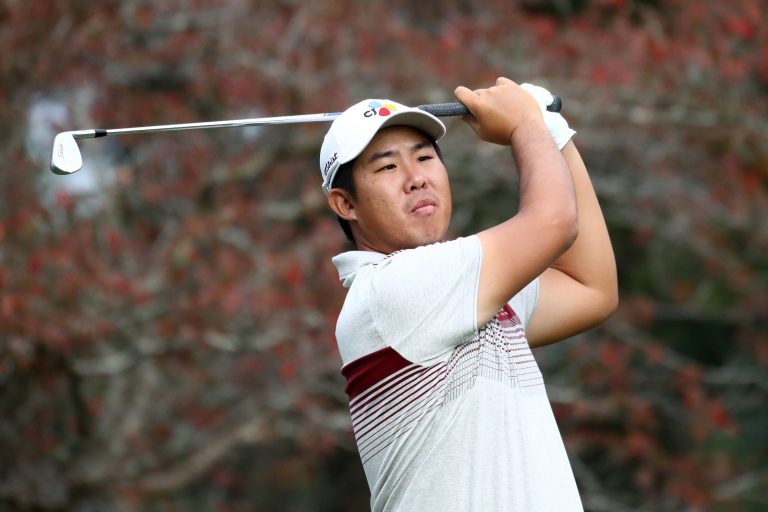 Byeong Hun An of South Korea hits his tee shot on the 3rd hole during the third round of the Zozo Championship at Accordia Golf Narashino Country Club on October 27, 2019, in Inzai, Chiba, Japan. (Photo by Chung Sung-Jun/Getty Images)

Day, who recently was selected by Els as a captain’s pick to be a part of the International Team for the fifth time, announced that he has been forced to withdraw from the 2019 competition due to a back injury. The Presidents Cup will return to Melbourne, Australia and The Royal Melbourne Golf Club for the third time, December 9-15, 2019.

“We wish Jason well and hope his back recovers quickly. We were eager to have Jason as part of the team at Royal Melbourne and his experience will be missed,” Els said. “The good news is that there were a number of strong and qualified players available to choose from when I made my captain’s selections. To have someone as steady and talented as Ben An puts us in a great position to succeed. Ben played extremely well this fall and throughout the year and he will fit in nicely on this team.”

With An’s inclusion, the International Team will now feature two Korean players as 2019 PGA TOUR Rookie of the Year, Sungjae Im is also on the team as one of Els’ picks.

During the 2018-19 PGA TOUR Season, An enjoyed three top-10s and eight top-25 finishes including a third-place result at the Wyndham Championship in August.

He finished 15th on the International Team standings to miss out on automatic selection for the Presidents Cup but put together a strong case for a captain’s pick by starting the 2019-20 PGA TOUR season on a strong note. This start included top-10s at the Sanderson Farms Championship (3rd), THE CJ Cup @ Nine Bridges (T6) and Zozo Championship (T8). He also finished T14 at the World Golf Championships-HSBC Champions.

Day said: “I’m quite disappointed I won’t be coming home to play in either the Australian Open in Sydney or the Presidents Cup the following week in Melbourne. I was quite looking forward to both events. I had been prepping all week in Palm Springs when I was injured. Frustratingly, I’ve been through back problems before and my medical team decided it best to shut down all practice and play. Therefore, I wanted to inform Golf Australia as well as provide Ernie as much time as possible to best prepare our International Team for Royal Melbourne. I look forward to playing at home in the near future. My best to all the competitors in Sydney and my teammates in Melbourne.”

Day finished No. 9 in the International Team standings and owns a 5-11-4 Presidents Cup record.