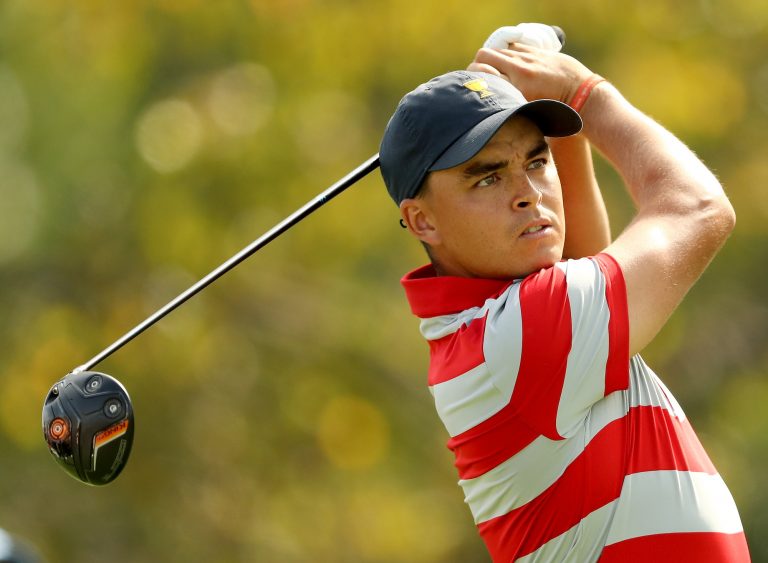 Rickie Fowler during a practice round prior to the Presidents Cup on September 26, 2017, at Liberty National Golf Club in Jersey City, New Jersey.

Brooks Koepka, who qualified as the No. 1-ranked player for the U.S. Presidents Cup Team, announced that he has been forced to withdraw from the 2019 competition due to a knee injury. U.S. Team Playing Captain Tiger Woods used the additional selection afforded to him by Koepka’s withdrawal to select Rickie Fowler. The Presidents Cup will return to Melbourne, Australia and The Royal Melbourne Golf Club for the third time, December 9-15, 2019.

Koepka’s statement: “Today, I am announcing my withdrawal from the U.S. Presidents Cup Team because of my knee injury.  I notified Captain Tiger Woods that despite constant medical care and rehab, I am not able to play golf at this time.  I consider it to be a high honour to be part of the 2019 team and I regret not being able to compete.

Since my injury in Korea, I have been in constant contact with Tiger and assured him that I was making every effort to be 100 per cent in time for the Presidents Cup in Australia.  However, I need more time to heal.

I’m sorry I won’t be able to represent the Red, White and Blue this time around and I wish my teammates nothing but the best as they work to retain the Presidents Cup for the USA.”

December’s event would have been Koepka’s second Presidents Cup appearance after making his debut in 2017 and compiling a 2-2-0 record.

“Brooks and I talked, and he’s disappointed that he won’t be able to compete,” said Woods. “I told him to get well soon, and that we’re sorry he won’t be with us in Australia. He would clearly be an asset both on the course and in the team room.”

Fowler will now play for the third time on the U.S. Team following a strong showing in 2017 at Liberty National where he was undefeated with a 3-0-1 record.

“I spoke to Rickie and he has agreed to join the U.S. Team,” Woods said. “Rickie has played on a couple of Presidents Cup teams, was someone seriously considered for a pick and is well respected and liked by his teammates. I know he’s going to do a great job for us. We’re all excited about this year’s event. The course is outstanding, the fans will be loud and we’re playing against great competitors. We’re ready to go.”

“When I heard Brooks wasn’t going to be ready to play, I was bummed for him and the team,” Fowler said. “Then I got a call from both Brooks and Tiger. I was humbled and excited to be given the chance. These team events have been some of the most memorable weeks of my career. To be picked by Tiger to compete with him and the rest of the team is very special. It is impossible to replace the world’s No. 1, but I can assure my teammates and American golf fans that I will be prepared and ready to do my part to bring home the Presidents Cup.”