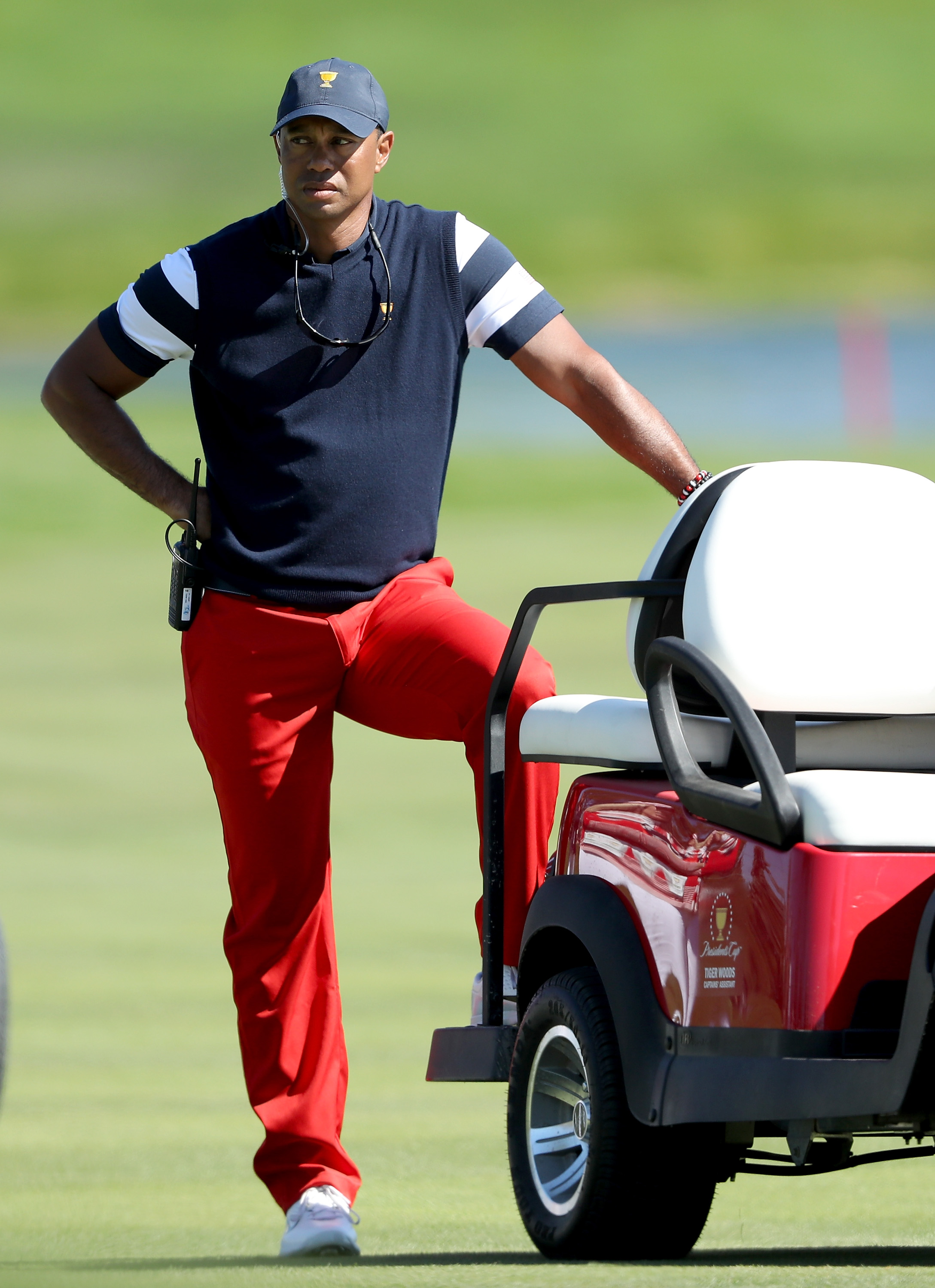 Tiger Woods one of the United States team assistant captains during the final day singles matches in the 2017 Presidents Cup at the Liberty National Golf Club on October 1, 2017, in Jersey City, New Jersey. (Photo by David Cannon/Getty Images)

With the 13th Presidents Cup set to begin in just over a month at The Royal Melbourne Golf Club, the final four players for the U.S. Team were determined today as U.S. Team Captain Tiger Woods announced his four captain’s picks. Woods chose Tony Finau, Patrick Reed, Gary Woodland and himself, making him the second-ever playing captain in Presidents Cup history.

For the first time in Presidents Cup history, each captain makes four captain’s picks instead of two. With these picks, the U.S. Team has 21 previous Presidents Cup appearances amongst its members with five players making their Presidents Cup debuts.

Tiger Woods (finished No. 13 in the U.S. Team standings) will become the Presidents Cup’s second-ever playing captain (Hale Irwin, 1994) and make his ninth career Presidents Cup appearance. Woods has a Presidents Cup record of 24-15-1 since his first appearance on the 1998 U.S. Team, and he is one of five players to earn a perfect 5-0-0 record during a single event (2009).

His 24 matches won ranks second all-time to Phil Mickelson’s 26 and his six victories in Singles matches are the most in the event’s history. Woods also holed the winning putt for the U.S. Team in 2009, 2011 (at Royal Melbourne) and 2013 – the only player to clinch the Cup three times.

At the conclusion of his 2018-19 season in mid-August, Woods underwent arthroscopic knee surgery the following week to repair minor cartilage damage in his left knee. He made his first start of the 2019-20 season at the Zozo Championship in late October. Woods opened with rounds of 64-64 and held at least a share of the lead after each round en route to a three-stroke victory in Japan for his 82nd PGA Tour title that tied him with Sam Snead for most wins in Tour history.

“As captain, I’m going to choose Tiger Woods as the last player on the team,” Woods said. “He’s made, what, nine Cups and he’s played in Australia twice in the Presidents Cup, so this will be his third appearance as a player. It’s going to be difficult, but also I have three amazing assistants with Fred, Strick and Zach, and that helps a lot, two guys that have won Presidents Cups and one will be a future captain along the line in the near future. Three great minds that will help me when I’m playing.

“It’s going to be a lot of work, but something I’ve been looking forward to for a long time. I’ve been vice-captain in two Cups, so understanding it and seeing it, what those roles are is a little bizarre, and seeing it from a different side is really going to help.”

Tony Finau (No. 9) will make his Presidents Cup debut after narrowly missing out on one of the eight automatic qualifying spots. The 30-year-old recorded another consistent season on the PGA Tour in 2018-19 that resulted in six top-10 finishes in 25 starts and his third consecutive Tour Championship appearance.

Finau began his 2019-20 PGA TOUR Season at the Shriners Hospitals for Children Open where his T9 finish was highlighted by a third-round 62 at TPC Summerlin. His lone PGA Tour victory came at the 2016 Puerto Rico Open.

Finau competed for the United States at the 2018 Ryder Cup, where he finished with a 2-1-0 record.

“Extremely pumped and excited to add my talent to the mix of guys and to play for Tiger,” Finau said. “It was a goal of mine to start this season and I know I wanted to just have the opportunity to play and play for Tiger. So I was very pleased to get that phone call. It’s one that I’ll remember forever and I’m excited, again, to join the team and honoured, honoured to get that call from Tiger.”

“This will be his first Presidents Cup; he played in the Ryder Cup last year. So he’s been around it, he’s understood it, and what a great team guy and a pleasure and just an overall genuinely nice guy,” Woods said. “Everyone on this team wants to play with Tony. He can play either format, which is great, so we look forward to having him part of this team.”

Back for his third consecutive Presidents Cup, Patrick Reed (No. 12) will join the U.S. Team as a captain’s pick for the first time.

Following a 1-2-1 performance in his debut in 2015, Reed rebounded in 2017 and teamed with Jordan Spieth to earn 3.5 points before falling to Louis Oosthuizen, 1-up, in Singles. His overall Presidents Cup record sits at 4-3-2.

Reed earned his seventh career PGA Tour victory at The Northern Trust to go along with four other top-10 finishes during the 2018-19 PGA Tour Season.

Through two starts in the 2019-20 season, Reed has shown signs of rounding back into form with a T17 at the Zozo Championship that was followed by a T8 at the WGC-HSBC Champions.

Known for his match-play prowess, Reed has competed in every team event for the United States since the 2014 Ryder Cup.

“For me personally, I live for events like the President’s Cup and Ryder Cup,” Reed said. “I enjoy every minute of the competition, the fans and playing for our country. It means so much to me to be a part of this team, and I’m going to do everything I can to help the USA bring home the Presidents Cup.”

“This is a person that is as fiery as they come and he’s bleeding red, white, and blue and he will do anything to get points for you, and that’s what we want,” Woods said. “We want points, and he’s a great team guy in there because he knows that when he goes out on that golf course, he’s going to give you absolutely everything he has, and that’s admirable, and the guys are looking forward to embracing him and having him be a part of this team.” 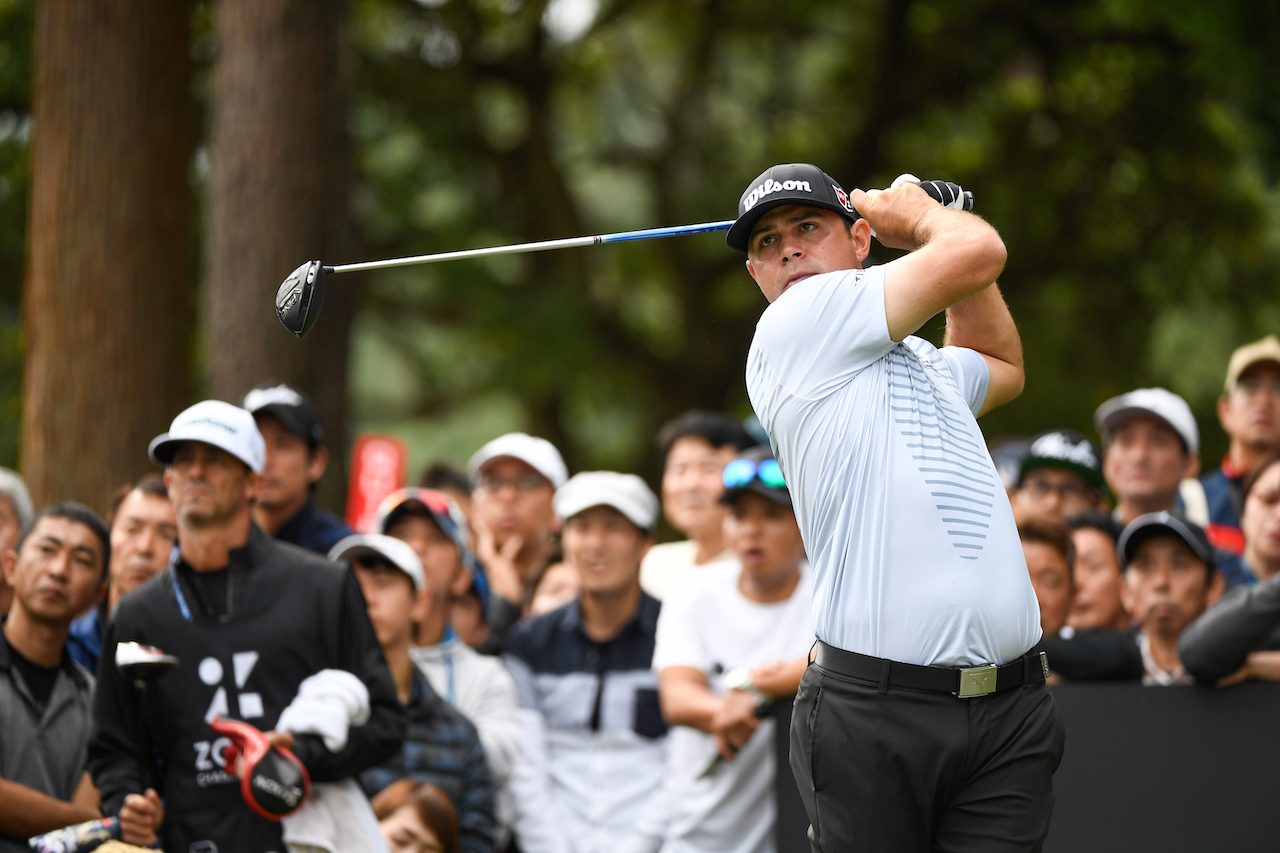 Gary Woodland tees off on the 14th tee during the third round of The Zozo Championship at Accordia Golf Narashino Country Club on October 27, 2019, in Chiba, Japan. (Photo by Ben Jared/PGA TOUR via Getty Images)

Gary Woodland (No. 10) will make his Presidents Cup debut following his most successful season on the PGA Tour that yielded two runner-up finishes to go along with his fourth career victory at the U.S. Open.

In five starts following the U.S. Open, Woodland finished no better than T31 and fell out of the top-8 in the U.S. Team standings. Through three starts during the 2019-2020 season, however, Woodland collected two top-5 finishes at THE CJ Cup @ Nine Bridges (T3) and the Zozo Championship (5th), where he was paired with Captain Woods for the final two rounds.

“I can’t tell you how excited I am. I’ve been close to making a lot of teams and I have never made one,” Woodland said. “It’s been a goal at the start of every year to make that team…I miss the team atmosphere. I want to get in that locker room and see the guys. That’s what I’m looking forward to, and on top of that, representing your country and you’re playing for Tiger Woods, that’s pretty special.”

“What he displayed this year at Pebble Beach in winning the U.S. Open, that was awfully special, and we’ve all known the talent that he has had, and he’s just now figuring it out and putting it together, and we couldn’t have a better, more competitive guy,” Woods said. “We all know he’s a jock that played basketball and went with this golf thing, and it turned out all right. Again, another good dude that all the players wanted on the team.”