World Handicap System to Roll Out in 2020

The World Handicap System (WHS) is ready to be launched from January 2020 and will provide golfers with a unified and more inclusive handicapping system for the first time.

Though many countries are planning to adopt the new system in January, the system will go live in other parts of the world throughout the year to accommodate different implementation plans and variations in the golfing calendar.

Developed by The R&A and USGA in close coordination with existing handicapping authorities, the WHS will provide all golfers with a consistent measure of playing ability, with handicaps calculated in the same way wherever they are in the world.

A key objective of the initiative was to develop a modern system, enabling as many golfers as possible to obtain and maintain a Handicap Index. Golfers will be able to transport their Handicap Index globally and compete or play a casual round with players from other regions on a fair basis. It will also indicate the score a golfer is reasonably capable of achieving the next time they go out to play.

The table lists the estimated implementation timeframes for a selection of countries:

Malaysia will also be switching to the WHS from the existing National Handicapping System (NHS) in 2020. Currently, the Malaysia Golf Association (MGA) is testing the software and a trial run will be conducted in end November. Both the WHS and the NHS will run concurrently. However, the MGA was taken by surprise when no mention was made of Malaysia’s switch to the WHS in the list provided of the estimated implementation timeframes for a selection of countries.

According to the Chairman of the MGA National Handicapping System sub-committee David Thong, the MGA will be writing to the relevant bodies to query why Malaysia wasn’t mentioned in the list when Malaysia is actively involved in the process of change.

The WHS has two main components – the Rules of Handicapping and the Course Rating System. The Rules of Handicapping are encompassed within seven Rules to inform administrators and golfers on how an official Handicap Index is calculated and administered, with some flexibility given to national associations based on how the sport is played and enjoyed in their region. The Course Rating System, based on the USGA Course Rating System first adopted nearly 50 years ago and already adopted on nearly every continent, sets out a consistent method of determining a course’s difficulty. Together, these components become the foundational elements in determining a golfer’s Handicap Index.

Martin Slumbers, Chief Executive of The R&A said, “The game of golf is transforming to meet the needs of the modern-day golfer; modernising the Rules this year was an important step forward in that regard and the World Handicap System will be another.

“Our hope is that the launch of the WHS will be a catalyst for change; signalling the start of a new era of golfer engagement, being inclusive by embracing all golfers, whatever their level of ability, and broadening its appeal to a much wider audience.

“Change also means opportunity and, managed appropriately, this can only be good for the game. It does mean there will be a period of adjustment, as we saw with the new Rules, but once it beds in golfers and golf clubs will benefit in many ways from the new system.” 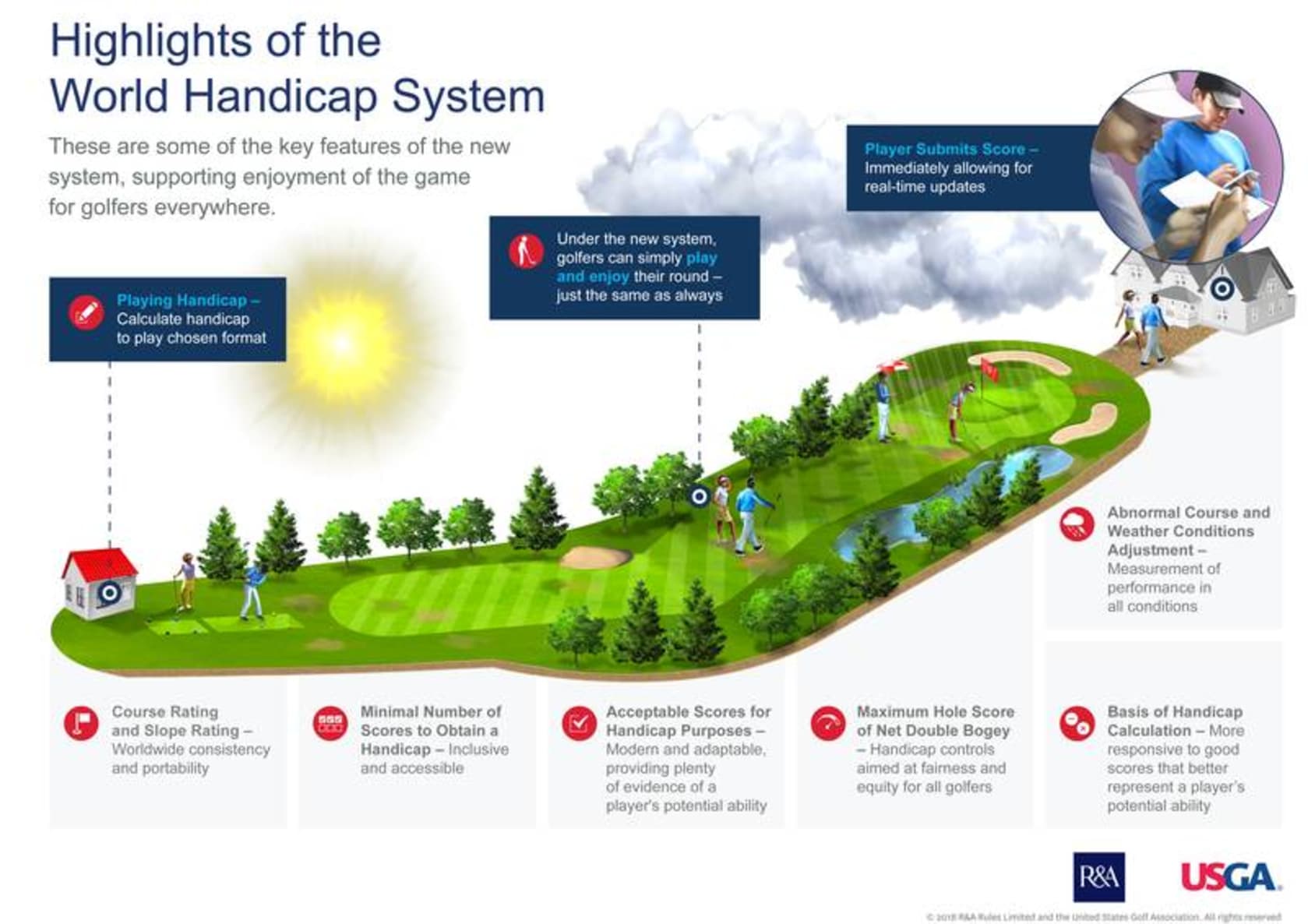 “When the golf community works together, everyone benefits,” said Mike Davis, CEO of the USGA.  “We have seen the benefit that handicapping has provided for decades, providing greater enjoyment for all who play. To have a single set of Rules of Handicapping for the game will connect golfers from country to country, and we are excited to bring the best of all worlds together through this initiative.

“It is one of the many ways we are investing in golf’s future, to strengthen and foster growth of the entire game for years to come.”

In preparation for the launch of the WHS, more than 3,000 golf courses have been rated for the first time and an extensive education program has been delivered. By the end of 2019, more than 90 National Associations will have attended an educational seminar and a robust library of resources is hosted on WHS.com to support regional education.

Rules of Handicapping books are being produced and will be translated and delivered through national associations.

In addition, the USGA and The R&A have developed a series of golfer-focused materials, including videos, infographics and posters, which can be used by national associations and shared with golf clubs for the benefit of golfers.

This includes a promotional video which can be seen here featuring Annika Sorenstam, Gary Player and voices from recreational golfers from around the world to encourage as many golfers as possible to obtain and maintain a handicap.

The materials explain the system’s key features, including:

The formation of a World Handicap System was first conceived in 2011 between the USGA and The R&A in an effort to engage more golfers in the game and promote equity, no matter where golf is played.  The effort unites six existing handicapping systems into one while embracing the many ways the sport is played across cultures.

Beginning in 2020, the new WHS will be governed by The R&A and the USGA and administered by national and regional golf associations around the world.

To learn more about the World Handicap System please visit WHS.com.  For WHS information specific to a country, use the Association Finder for further information.