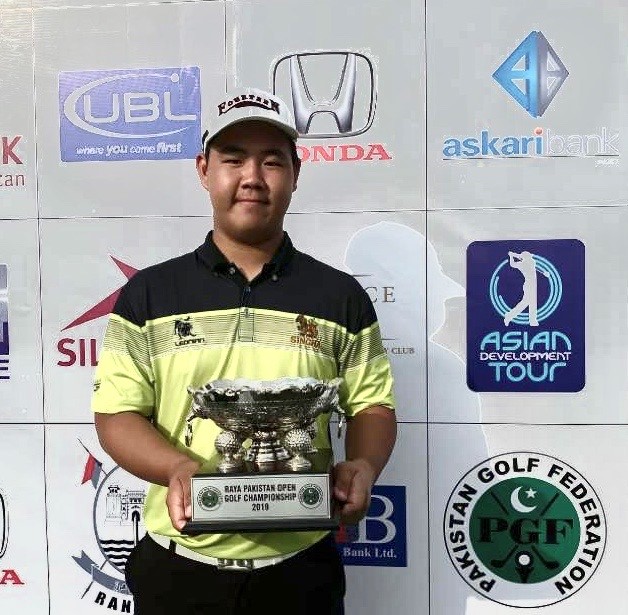 Korea’s Joohyung Kim stamped his class by capturing his third Asian Development Tour (ADT) title this season with a dominant wire-to-wire victory at the US$80,000 Raya Pakistan Open.

The 17-year-old Korean, who started his final round with a commanding 11-shot lead ensured he would become only the third player in the ADT history to win three times in a single season when he signed off with a one-over-par 73 to clinch the title by nine shots.

Only Chinese Taipei’s Chan Shih-chang and Pavit Tangkamolprasert of Thailand have achieved the feat when they won three times in a single season on the ADT in 2014.

With his latest victory, Kim is also assured of his immediate playing rights on the Asian Tour for the remainder of the 2019 season.

Pakistan’s Muhammad Shabbir finished in second place after posting a 67, while Fiji’s Sam Lee came in third courtesy of his final round 68.

Singapore’s Choo Tze Huang settled for fourth-placed after signing for a 74 while  American Sam Gillis took fifth place by posting a 71.

Kim got off to a shaky start with a bogey on the second hole. He recovered quickly by firing two birdies on the third and sixth holes before dropping another shot on nine.

“I know I had a big lead, but golf is a game that is not over until you have played the last hole. There were some tough pins out there and I made some mistakes, so, fortunately, that big lead helped,” said Kim, who had won in Malaysia and Indonesia earlier this season.

It was a well-deserved victory for Kim as it had been a physically demanding week where the young Korean had to play 28 holes on Saturday while trying to maintain his focus and composure on the final day at the Defence Raya Golf and Country Club.

“I lost a lot of energy after that 28 holes. Today I got off to a shaky start, but I told myself to hang in there and finish as strongly as I can.

“Moving to Thailand last year, where I’m based at now helped me to develop my game a lot. There are a lot of good golfers there and playing with them has made me better. But I still have a lot to learn,” said Kim, who cements his position as the Order of Merit leader with his accumulated earnings of US$59,444.47 on the money list.