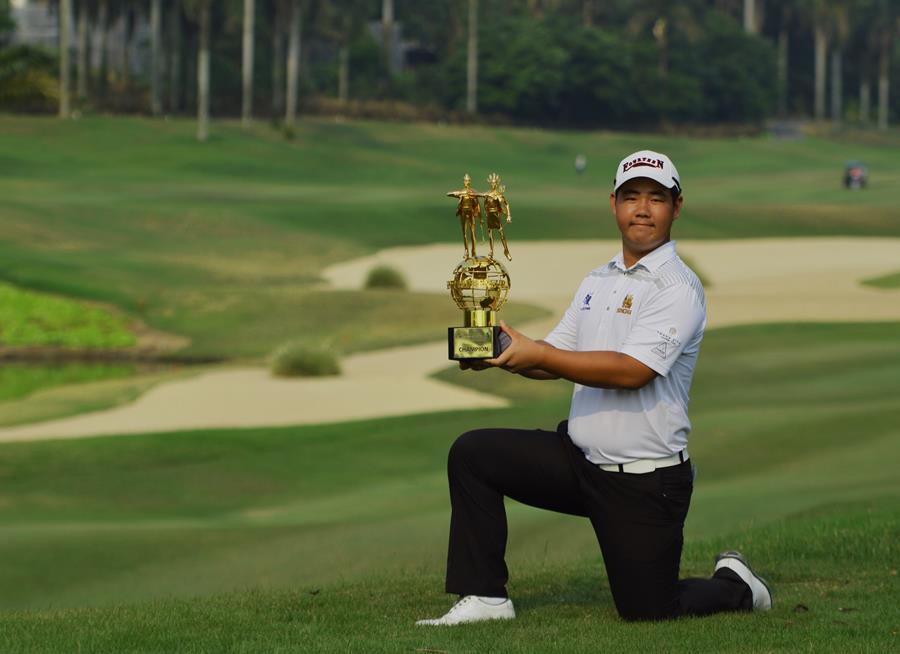 Joohyung Kim of Korea overturned a five-shot deficit before going on to pip overnight leader Mardan Mamat in the playoff to claim his second Asian Development Tour (ADT) title at the Ciputra Golfpreneur Tournament presented by Panasonic.

The 17-year-old Kim calmly rolled in a four-foot birdie putt to beat Mardan on the first extra hole held on the par-five 18th to pocket the US$19,250 top prize that put himself back in the race for the ADT Order of Merit title.

The Korean had fired a flawless five-under-par 67 to force extra time with Mardan, who battled to a 72, after the duo was tied on 18-under-par 270 total in regulation play at the Damai Indah Golf (BSD Course).

Kim birdied four of his five holes starting from the fourth before picking a crucial birdie on the 18th to match Mardan’s effort.

Mardan, who had held an overnight five-shot lead, could only salvage a 72 after mixing three birdies with as many bogeys, which all came in the opening nine.

Kim was grinning from ear to ear after making up on his earlier disappointment in Indonesia, where he was forced to withdraw from the Gunung Geulis Golf Invitational supported by Nomura due to an injury three weeks ago.

“To be able to come back to Indonesia to win following my injury setback was really fulfilling.

“I had to withdraw from the Gunung Geulis event because of the pain I suffered in between my shoulder and back. I went back to Korea to seek treatment and do my rehab, I was really determined and motivated to get back on my feet ahead of the Ciputra event.

“But today, I certainly did not think I could win as Mardan was playing so well all week long. Being five shots behind is a mountain to climb and I just told myself to give my best shot,” said Kim.

“Game on. With this win, I’m now back in the Order of Merit race and relishing a big battle with Naoki for the rest of the season,” he said.

Kim, who won his first ADT title at the PGM ADT Tiara Melaka in June, is now only one win shy from securing a direct promotion to the Asian Tour.

He has been in a sensational form since the start of the season. Apart from the two titles, he also boast five top-10 results under his belt.

Naarajie closed with an impressive final round 66 to tie for ninth place for his best-ever outing on the ADT. It will be his maiden Asian Tour start outside Indonesia.

Co-sanctioned by the ADT and the Professional Golf Tour of Indonesia, the Ciputra Golfpreneur Tournament 2019 presented by Panasonic will be the 11th leg of the 2019 ADT season and the third event to be played in Indonesia this year.

The leading seven players on the ADT Order of Merit at the end of the season will earn playing rights on the premier Asian Tour for the 2019 season.

Official World Golf Ranking (OWGR) points are offered for all ADT events. The winner will earn a total of six OWGR points while the top-six players and ties earn points on a sliding scale.