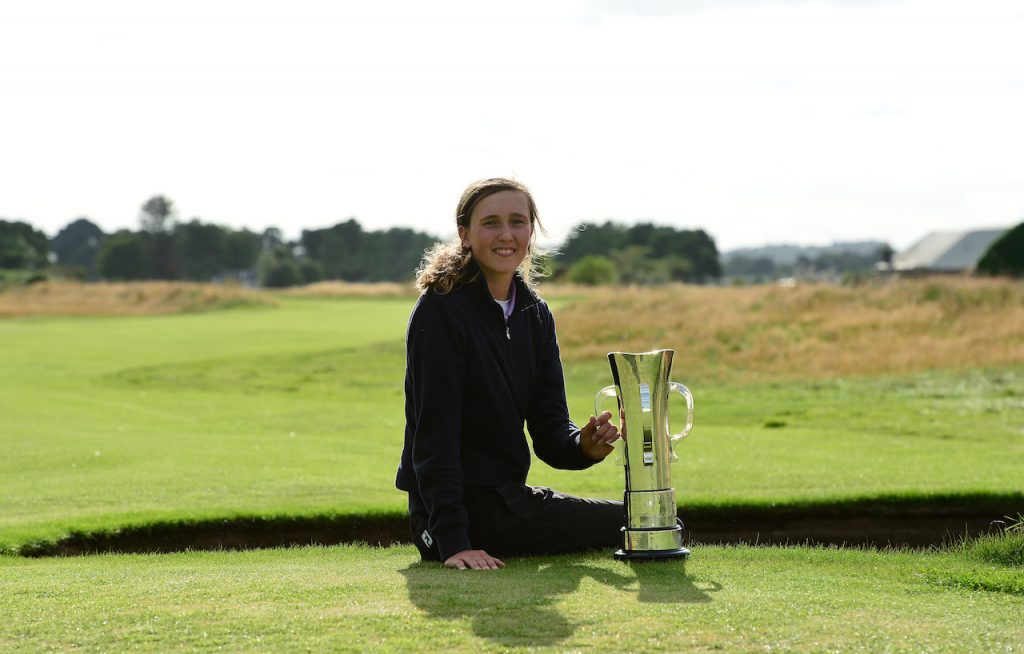 The 15-year-old Slovenian played impressively in blustery conditions throughout the 18-hole final to defeat Austria’s Holpfer, who was making her second consecutive appearance in the final after losing out to compatriot Emma Spitz at Ardglass last year.

Babnik took command of the match early on and never let Holpfer gain a foothold. She moved into the lead when Holpfer’s drive on the 3rd found trouble and she could only manage a bogey five. Babnik, who won the Helen Holm Scottish Women’s Open Championship in April, capitalised on bogeys from Holpfer on the 4th and 6th to move three ahead.

The 18-year-old from Vienna who is a former English Women’s Amateur Stroke Play champion, won the 8th with a par when Babnik found trouble behind the green but her drive on the 10th landed in a bank of rough to the left of the fairway and from there she could only manage a bogey six as Babnik produced a fine approach to secure a birdie four.

Babnik moved four ahead at the 12th when Holpfer’s approach found the rough to the right of the green and she strengthened her grip on the match even further when she holed an excellent 15ft birdie putt on the 13th.

Holpfer rallied with a birdie of her own on the par five 14th. Her excellent approach shot ran just off the back of the green from where two putts were enough to claim the hole when Babnik missed from six feet.

The Slovenian was undeterred, however, finding the front right of the green with her tee shot at the par three 15th. When Holpfer failed to hole her putt from just short of the green the match was over and Babnik claimed a memorable 4&3 win.

In the morning’s semi-finals, Babnik got off to a slow start against Euphemie Rhodes losing the second hole with a bogey six but the pendulum swung in her favour at the turn. A par three was enough to win the 9th and move back to all square. She won the next with a birdie four and Rhodes’ bogeyed the 11th to leave Babnik two ahead. A birdie on the par four 16th was enough to seal a 3&2 win for her.

Holpfer’s opening drive in her match with Mia Sandtorv Lussand found the rough on the left and she could only bogey the hole, giving her opponent an immediate advantage. She recovered with a birdie three at the 4th, however, and moved up a gear with a run of four consecutive birdies from the 7th to move four ahead. Lussand reduced the deficit with a birdie to win the 11th and got back to two down with a win at the 13th. Holpfer was not to be denied, however, winning the 15th and then sealing the 4&2 win with a fine birdie at the 16th.