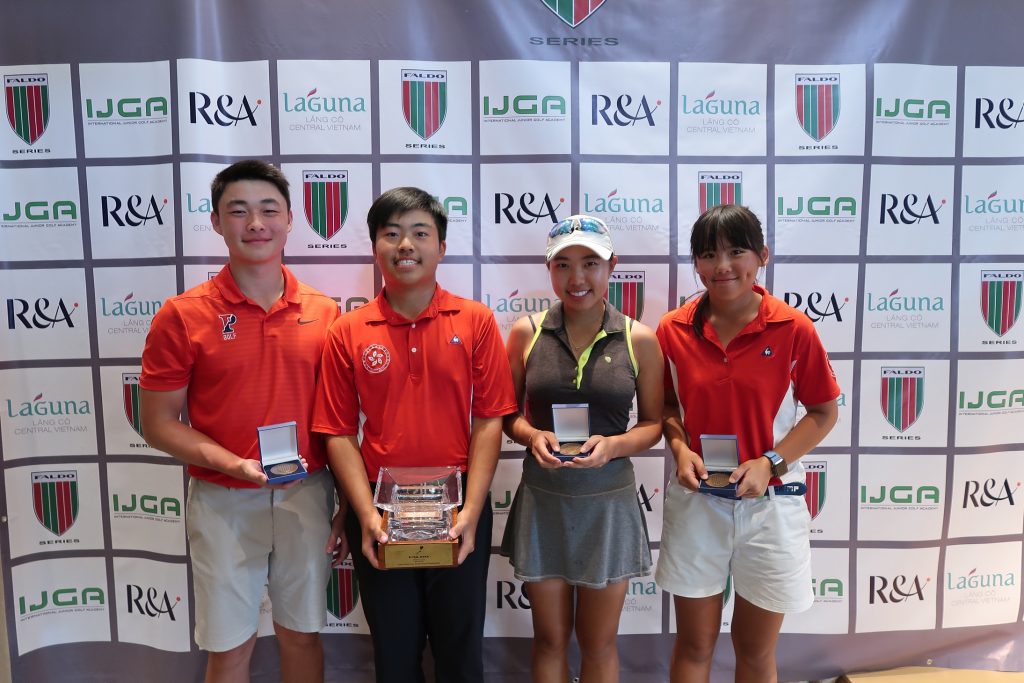 A member of the Hong Kong Golf Association’s Elite Junior Squad, Lau held a seemingly unassailable three-stroke lead heading into the final hole in the fifth leg of the 2019-20 Faldo Series Asia season over the North Course at the Jockey Club Kau Sai Chau Public Course.

However, with nerves fraying, Lau ran-up a triple-bogey seven on the 18th at the Gary Player-designed layout in the R&A World Amateur Golf Ranking event that was played in conjunction with the Jockey Club Kau Sai Chau Junior Open presented by now TV.

That meant he signed for a third successive 76 and a 54-hole aggregate of 228. It also left the door ajar for his two flight-mates, fellow Elite Junior Squad player Kim Joon-hoo and Jason Fan.

One of Hong Kong’s most exciting golfing prospects, Kim, winner of the 11-12 age group category last year, entered the final day with a four-stroke lead from Lau and a seven-shot advantage over Fan.

His chances of becoming the youngest winner of the Faldo Series Hong Kong Championship appeared to have evaporated, however, after a double-bogey seven at the long 17th. But a gutsy par at 18 enabled him to card an 80 and match Lau’s three-day total.

Returning to the first hole for the play-off, Kim twice sliced shots into deep trouble before conceding to Lau who thus took top spot in the Boys’ Under-16 category and overall, earning himself a spot in the 14th Faldo Series Asia Grand Final, to be hosted by Sir Nick Faldo at Laguna Lăng Cô in Danang, Vietnam, in March, 2020.

While Kim will rue his missed opportunity, Fan, who finished one stroke shy of joining the play-off, was consoled by the fact that he will join Lau in Vietnam after winning the Boys’ Under-21 section.

Also looking forward to a trip to Vietnam are Selina Li Yuen-yuet and Lau Hoi-ki. While Li enjoyed a comfortable six-shot success from Chen Hsiang-hua in the Girls’ Under-21 age group, Lau’s tussle for glory with Charlene Chung in the Girls’ Under-16 category went down to the wire.

Locked together at the top of the leaderboard through 36 holes, the duo were still inseparable after 17 holes on the final day. Thanks to a closing par, Lau edged her rival by one shot.

There was disappointment for Maurice Leung Ga-hay, the reigning Hong Kong Junior Close Championship winner and one of the pre-tournament favourites at Kau Sai Chau. A second-round 87 saw Leung drop out of contention and he ended in sixth place among the Boys’ Under-16s.

The 2019-20 Faldo Series Asia season is supported by The R&A and endorsed by the Asian Tour and the Asia Pacific Golf Confederation. The International Junior Golf Academy is a partner of the Faldo Series.