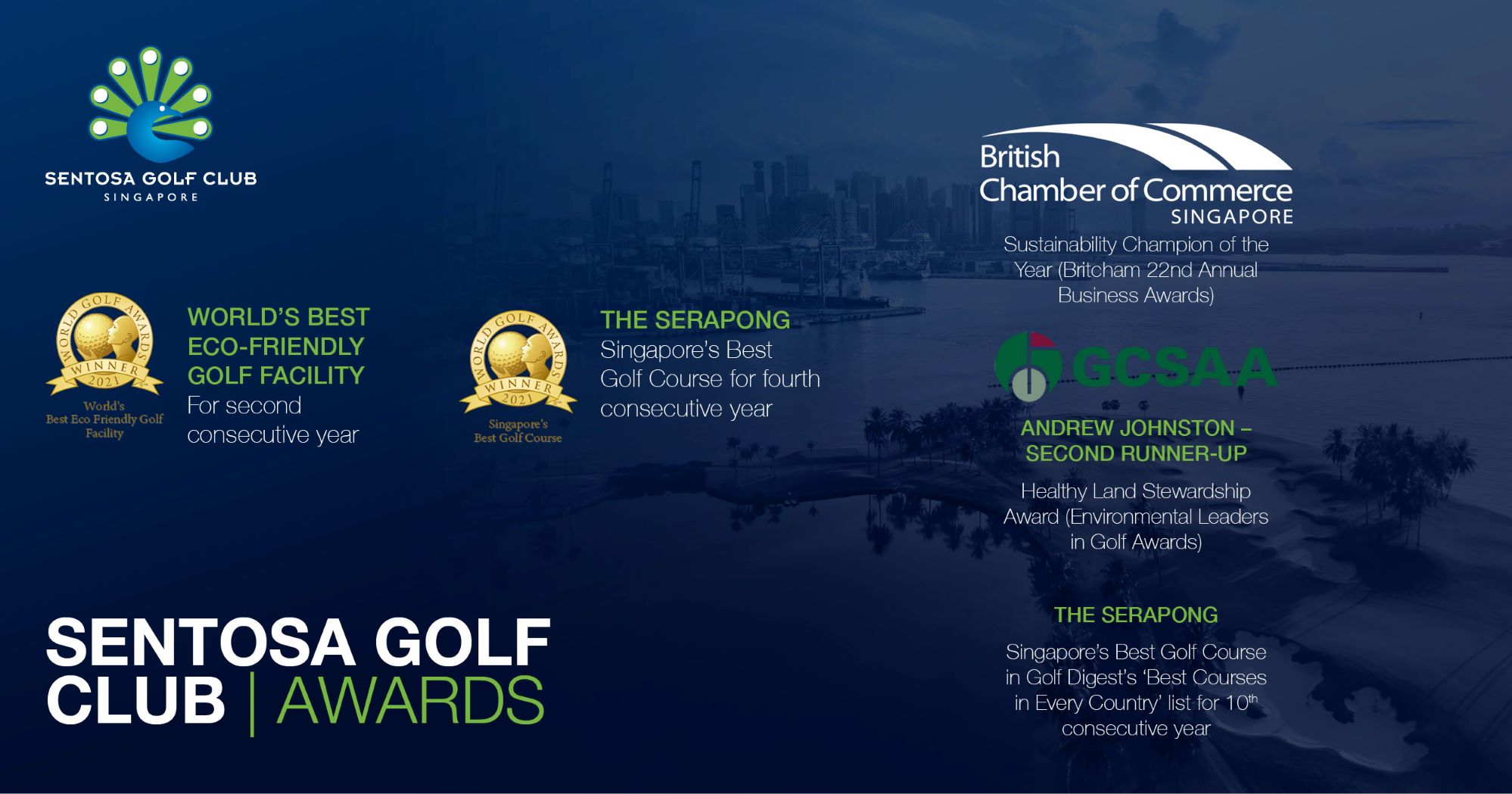 Sentosa Golf Club has wrapped up another successful awards season, after capturing the title of ‘World’s Best Eco-Friendly Golf Facility’ for the second consecutive year at the 2021 World Golf Awards in Dubai.

This latest accolade comes shortly after the Club received recognition as ‘Sustainability Champion of the Year’ at the Britcham 22nd Annual Business Awards (British Chamber of Commerce Singapore), further crediting their efforts in golf’s battle against climate change from an array of highly successful initiatives over the past 12 months.

At the World Golf Awards, the Club’s latest achievement is the third year in a row it has collected a headline, ‘world’s best’ award, having first captured the title of ‘World’s Best Golf Club’ in 2019.

It has been another standout year in the sustainability field, during which the Club announced a new pledge to become the world’s first carbon-neutral golf club by 2022, through various initiatives to actively manage and reduce its carbon, water and waste footprint including the deployment of energy-efficient buggies, innovative irrigation and agronomy technologies, and supporting offsite carbon sequestration through certified high-quality offsets from contributions from golf rounds.

Speaking at the Awards Ceremony in Dubai, Sentosa Golf Club General Manager, Andrew Johnston said, “To be recognised as the ‘World’s Best Eco-Friendly Golf Facility’ for the second successive year, as well as ‘Sustainability Champion of the Year’ at the Britcham 22nd Annual Business Awards, is an outstanding achievement. Receiving recognition for our hard work to improve and pioneer new sustainable initiatives over the last 12 months is also hugely satisfying.

“Sentosa will take great pride and satisfaction in winning these awards, however, our focus will remain on continuing the excellent work that has been carried out over the last three years and to continue to lead the industry in tackling this critical issue.”

Sentosa Golf Club’s awards success is firmly backed by the strength of its team, who deliver state-of-the-art championship courses in tournament-ready conditions, 365 days of the year, under the leadership and guidance of Johnston.

He masterminded an extensive renovation last year to The Serapong, to maintain its pristine quality playing standards and elevate the course to a new level on the world stage and has also been credited as second runner up in the 2021 Healthy Land Stewardship Award at the GCSAA Environmental leaders in the Golf Awards.

As part of the Club’s ongoing GAME ON campaign, five new electric vehicle (EV) charging stations were installed earlier this year as part of Porsche Destination Charging. This initiative is a global charging network being introduced at premium lifestyle destinations, with Sentosa being the first golf club in Singapore and the Southeast Asia region to join the programme.

In July 2020, Sentosa became the first golf club in the world to sign the UN’s Sports for Climate Action Initiative to help set the sports industry and their communities on a path to achieving the global climate goals established by world leaders at the Paris Agreement in 2016.