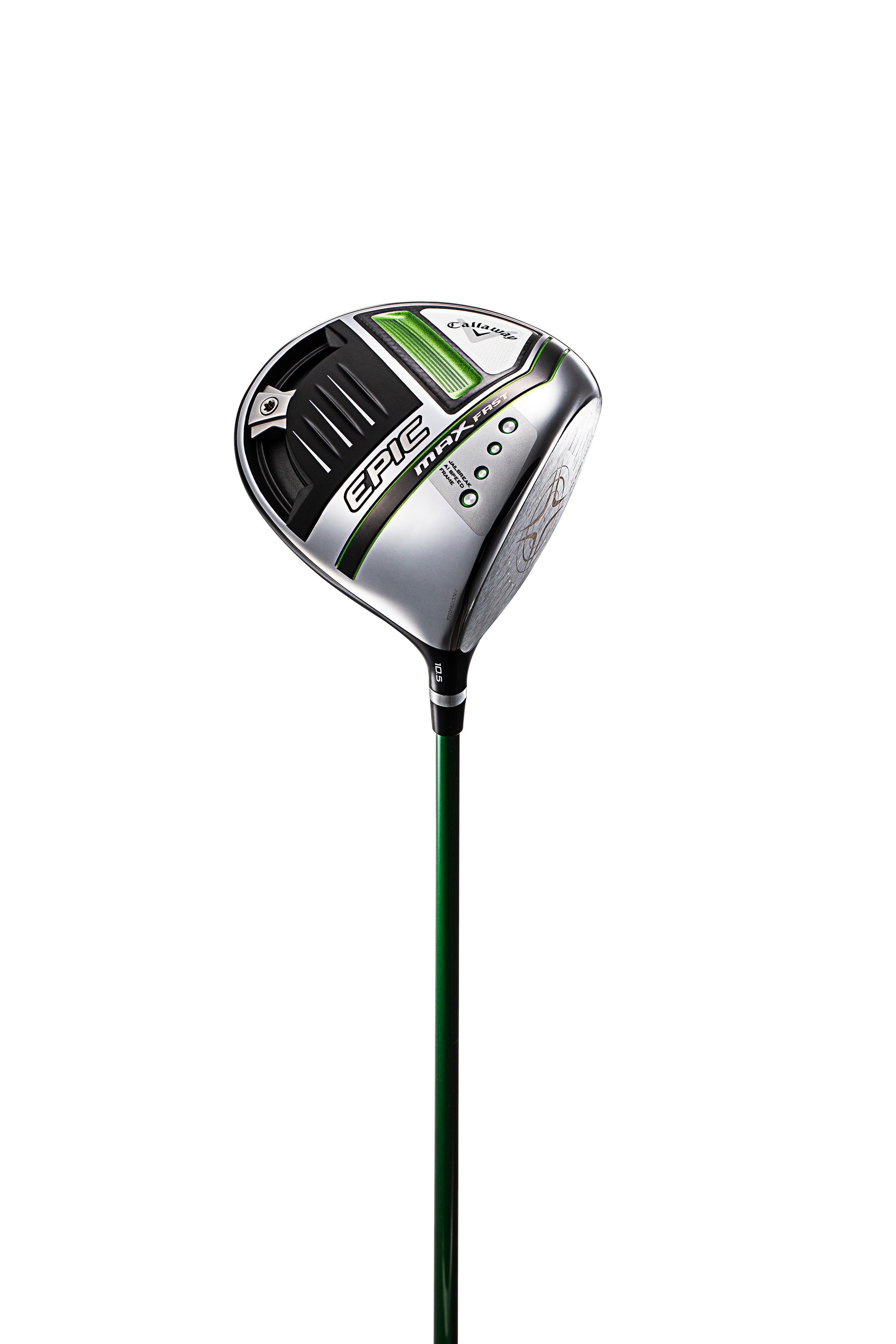 The new Callaway Epic Max Fast series, which was released in October 2021 has a stronger lineup that consists of a driver, fairway wood, utility and irons and is suitable for a wide range of players.

The new Epic Max Fast series utility and irons have also made their long-awaited debut along with the newly developed driver, fairway wood, based on the Epic Max series. In each case, the biggest theme is weight reduction, and Callaway pursued the ideal club weight, so anyone can quickly, sharply, and shake off to the finish. Even beginners and golfers who are not confident in their strength can exploit the potential of the latest technologies such as the Jailbreak AI speed frame. 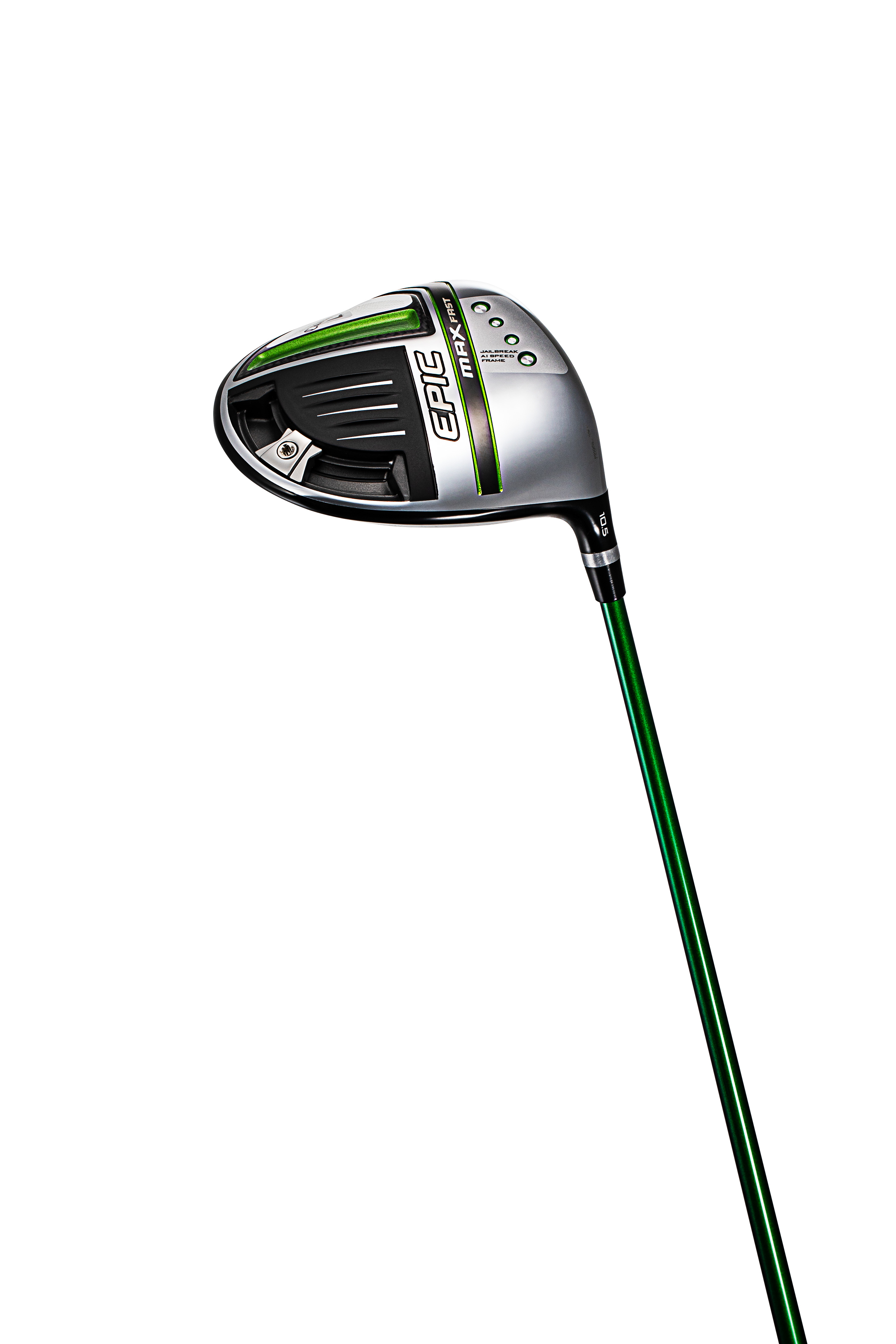 The Epic Max Fast Driver is a lighter model developed based on the head of the Epic Max driver, which has a draw bias that makes it easy to catch and lift the ball. The head weight is about 185g, comes with a non-adjustable adhesive hosel and a lightweight shaft and grip.

Of course, the Jailbreak AI speed frame technology, which was developed as an alternative to the two traditional pillars, Jailbreak technology, is also installed. AI is in charge of analysis and design under the task of maximising the amount of deflection of the face while further increasing the rigidity in the vertical and horizontal directions of the body. The result is a framed Jailbreak AI speed frame.

Jailbreak AI speed frame technology enhances the rigidity of the body. By that amount, the impact force is applied to the face more stably, and a higher initial velocity of the ball is produced. In addition, with the addition of the performance of Flash Face SS21, the Epic Max Fast Driver has achieved an unprecedented level of flight distance performance.

Similar to the Epic Max driver, the Epic Max Fast driver has a larger area of the triaxial carbon crown and uses triaxial carbon on the toe side of the sole. It is used to optimise the position of the centre of gravity. The rear part of the head is also equipped with its own perimeter weight, which weighs 12g. By adjusting the position, it is possible to tune to the desired trajectory. In addition, due to the effect of this weight, the moment of inertia is very large, and it suppresses the opening and closing of the face at the time of impact, resulting in a stable trajectory.

The overall shape and appearance of the Epic Max Fast driver head is similar to the Epic Max driver, but there are also major differences. Most of the face and sole have a white PVD finish, giving it a luxurious feel that is different from the black-based Epic Max driver. This also makes the contrast between the crown and face clearer when addressing, making it easier to set the face accurately with respect to the target 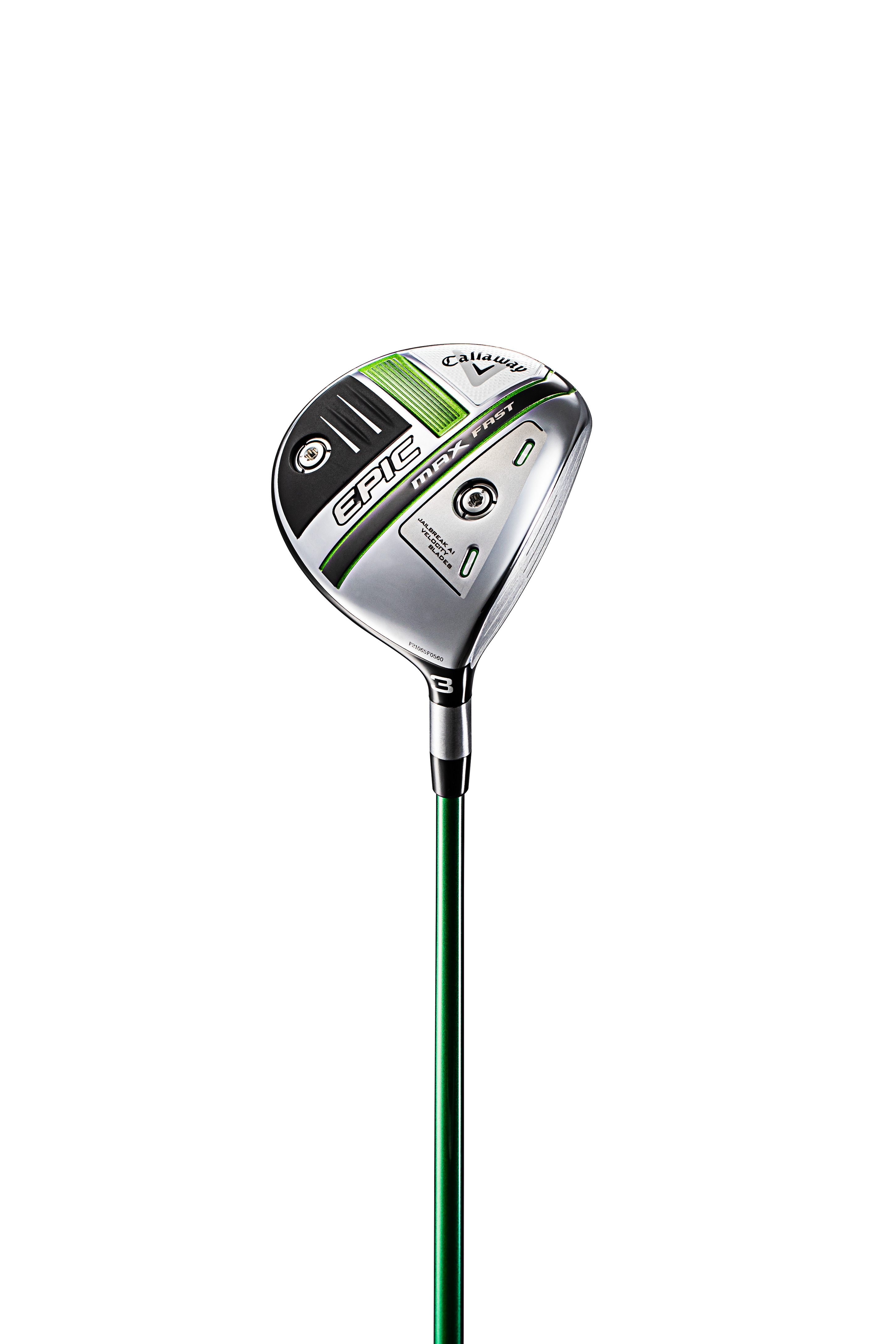 The shaft and grip are also lightweight, and the club weighs about 283g (R of # 3). It is a fairway wood that is very easy to swing. Also, like the Epic Max Fairway Wood, it has the characteristics of a high moment of inertia, a low centre of gravity and draw bias, making it easy to catch the ball, easily climbing it, and gently releasing a low-spin trajectory. By swapping the screw weights in the front and back, you can adjust the trajectory to a stronger or higher launch to your liking.

The head of the Epic Max Fast fairway wood uses the Flash face SS21 for this model and designed by AI for each count. In addition, this latest face is a face cup structure forged from C300 maraging steel (used in # 3 and # 5, # 7 is 455 carpenter steel), a high-strength material that can be made thinner and lighter. I am. The high initial velocity area is very large, which makes it possible to achieve an unprecedentedly large flight in a stable manner. Even a hit at the bottom of the face brings high ball speed. 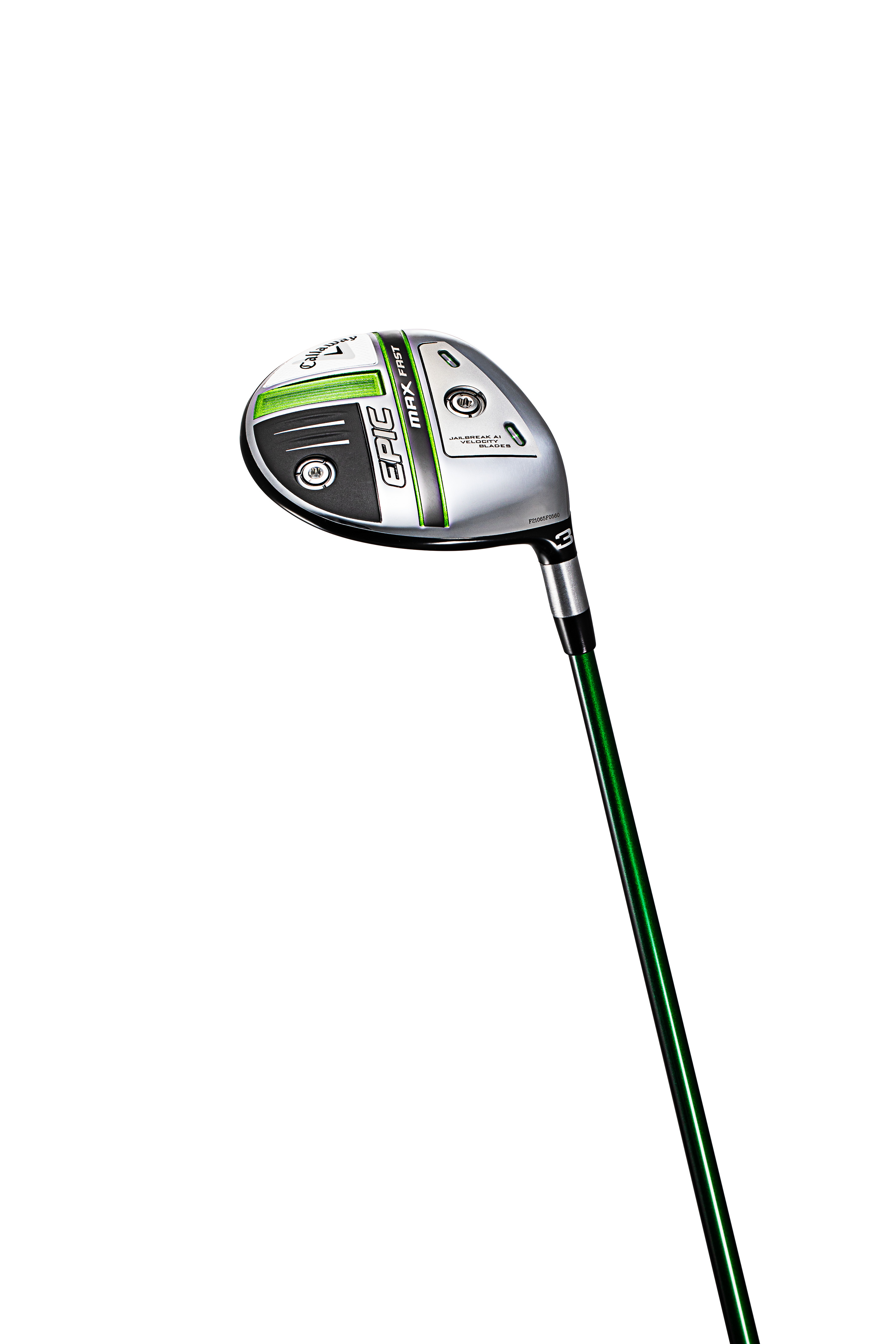 Like the Epic Max Fairway Wood, the Epic Max Fast Fairway Wood has Jailbreak AI velocity blade technology built into the head. Unlike the conventional two pillars, Jailbreak technology, AI is given the task of maximising the amount of deflection of the face by pursuing the optimum body rigidity that can fully utilise the characteristics of the face cup. Responsible for analysis and design. The result is a blade-shaped, spaced-spaced Jailbreak AI velocity braid. Along with the Flash face SS21, it achieves a repulsive force comparable to that of a driver. Enables amazing initial velocity of the ball.

The Epic Max Fast Fairway Wood has a square leading-edge design, similar to the Epic Max Fairway Wood. The closer you are to the ground, the easier it is to pick up the ball, which gives the player a sense of security in terms of appearance. The lineup is fairway wood # 3, # 5, and # 7.

The Epic Max Fast Utility uses the same latest technology as the Apex Utility, and at the same time, the head has been newly developed to be lightweight. By attaching a lightweight shaft and an ultra-light grip of about 30g to it, the club is very easy to swing. The head shape is a fairway wood type with a flat crown and a rounded shape. With the addition of a full scorelined face, the head can be held just like a wood.

The head of Epic Max Fast Utility uses the Flash face SS21 for this model and designed by AI for each count. In addition, this latest face has a face cup structure made by forging 455 carpenter steel. By combining the excellent characteristics and performance of both, we have achieved unprecedented ball speed and spin optimisation on any part of the face. It provides a large flight and a trajectory as intended and demonstrates unrivalled strength even when hit at the bottom of the face.

Jailbreak AI Velocity Blade Technology newly introduced by Apex Utility is also used in Epic Max Fast Utility. Unlike the conventional two columnar columns, Jailbreak technology, this time we were given the task of optimizing the rigidity of the body and increasing the amount of deflection of the face, and AI analyzed and designed it. The result is a blade-shaped Jailbreak AI velocity blade mounted in an inverted V shape. 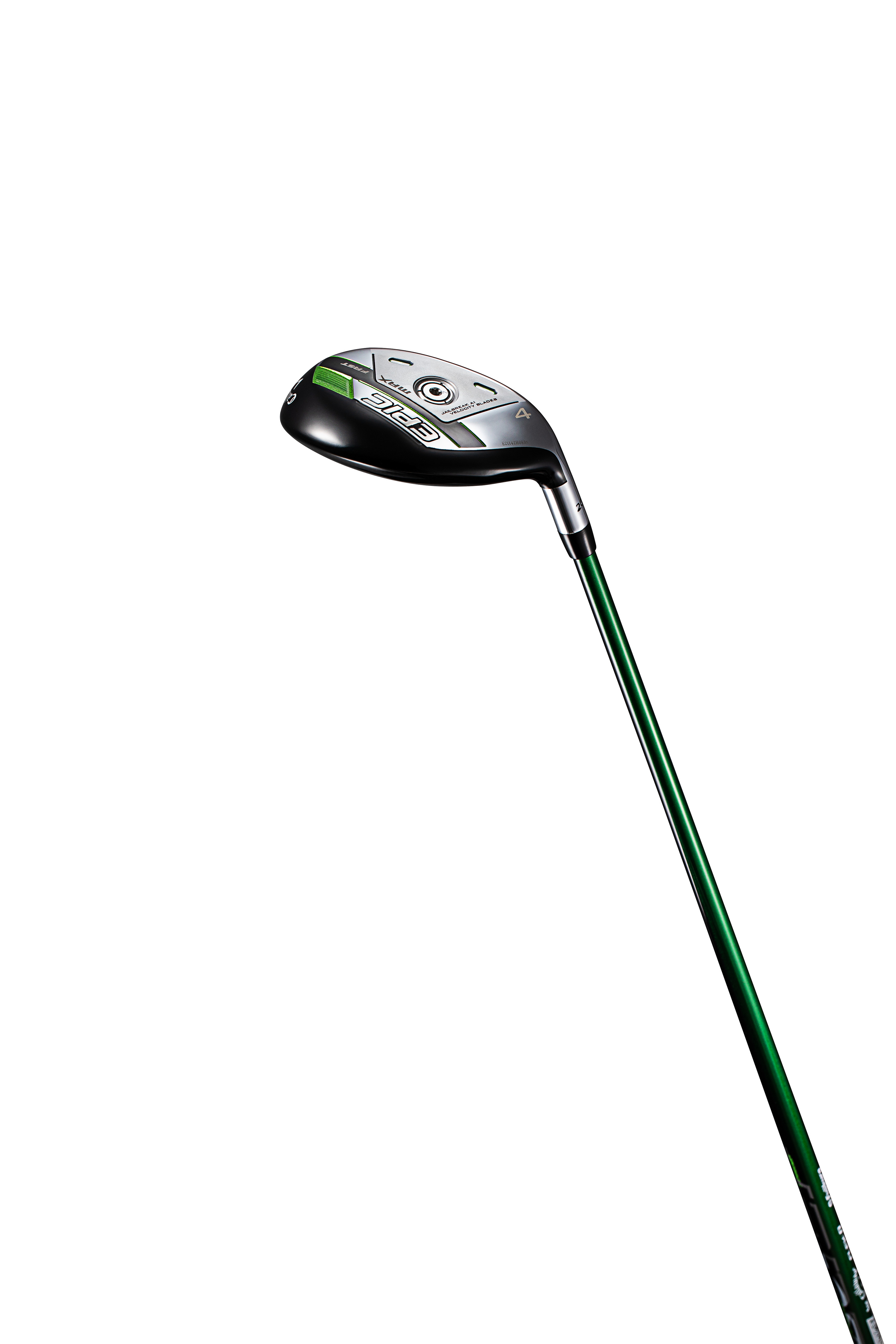 The Epic Max Fast Utility like the Epic Max fairway wood, has a square leading-edge design. The closer you are to the ground, the easier it is to pick up the ball, which gives the player a sense of security in terms of appearance.

The Epic Max Fast Utility is equipped with a 7g Sole Weight, but in addition, an extreme tungsten weight is also installed on the toe and heel inside the head. Since it is made by a moulding method called MIM that can manufacture complicated shapes with high accuracy, the position of CG is optimised and head has low CG and high MOI. The tolerance for mis-hits and ease with which ball can lift is amazing.

The Epic Max Fast Utility line-up comes in U3, U4 and U5. 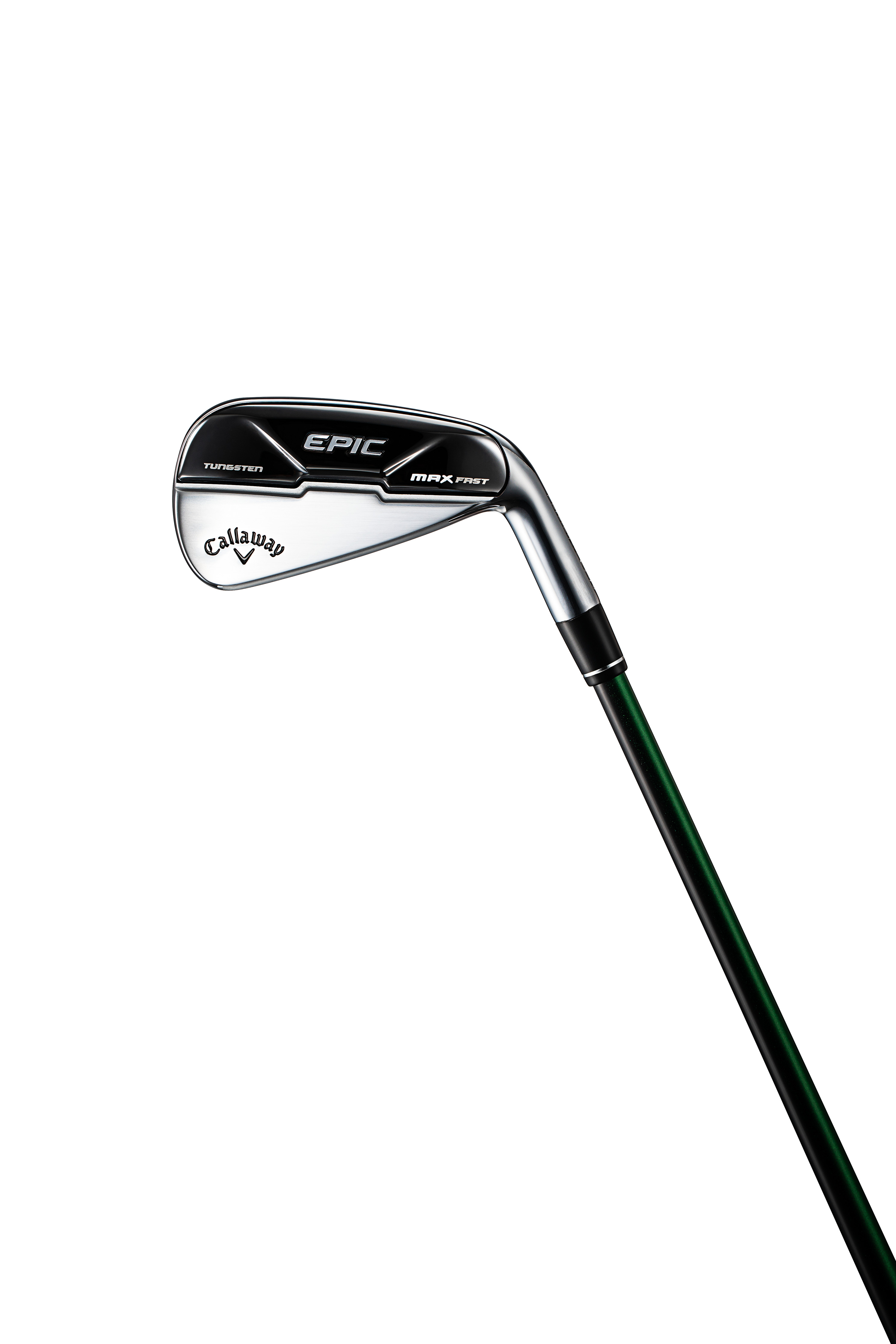 The Epic Max Fast Iron is a model that combines excellent flight distance performance and gentleness with ease of swinging due to weight reduction. The head size is large and a hollow structure is adopted. The easy-to-flexure face achieves high ball speed while also demonstrating strength against miss-hits. Another point is that I # 7 has a loft of 26 degrees, which is the most important setting for Callaway irons. A very lightweight model is attached to the shaft and grip. Even a golfer who is a little inferior can swing firmly.

The Epic Max Fast Iron is equipped with a Flash face cup designed by AI on all counts. This face is exclusively for the Epic Max Fast iron and pursues the optimum design for each iron number, and the initial velocity of the ball is greatly improved throughout all the irons. The high initial velocity area is also expanding, and the spin rate is optimised for each count. 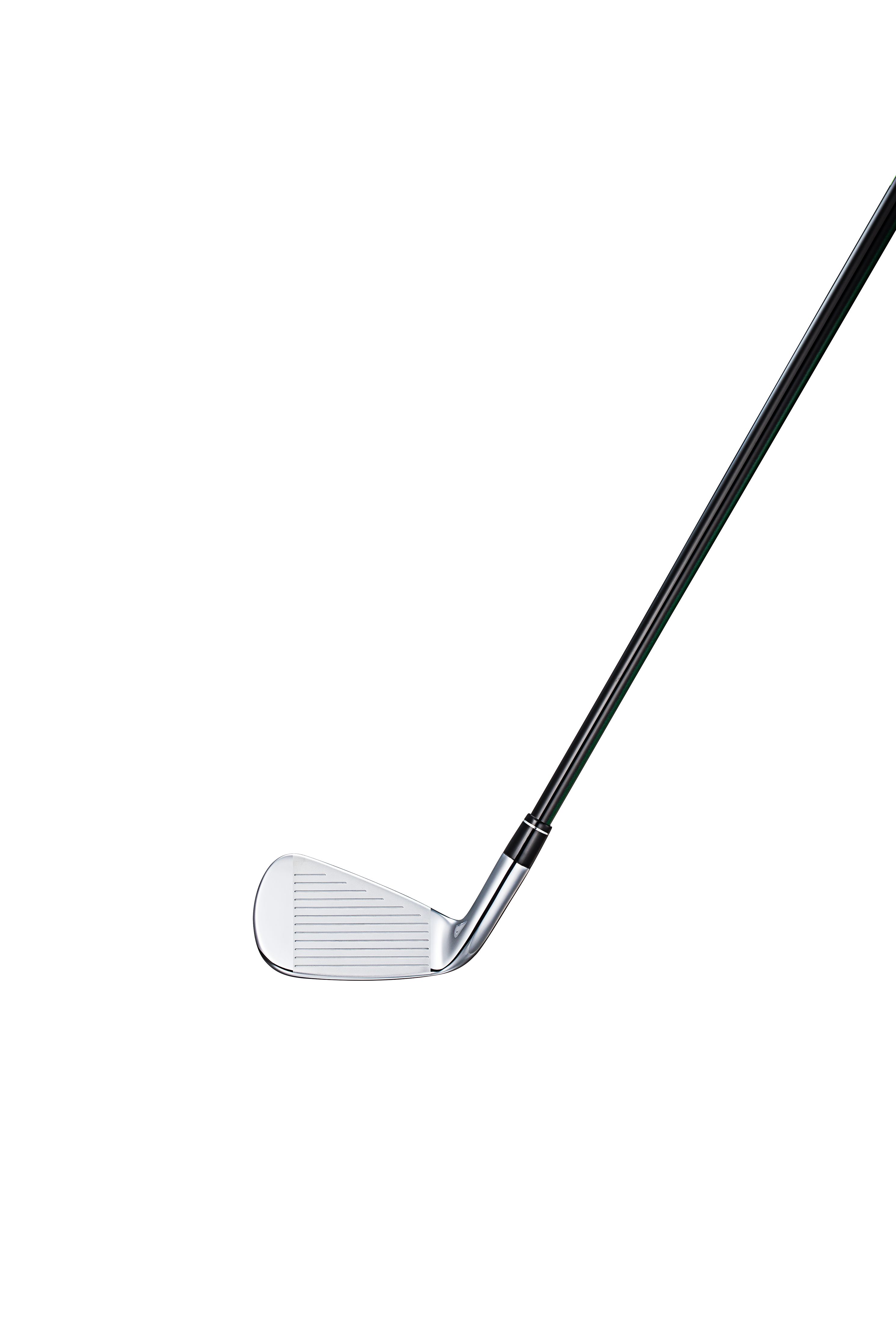 Callaway’s original tungsten energy core is used at the bottom of the head. The hollow structure of the head makes it possible to mount tungsten, which is heavier than ever before. Despite being a lightweight head, I # 7 weighs about 55g, which actually exceeds 50g. As a result, the ball is very easy to lift despite being a strong loft, and the head is resistant to miss-hits, which also contributes to the stable production of a high initial velocity of the ball by the Flash face cup.

In addition to the tungsten energy core, the Epic Max Fast Iron is also equipped with urethane microspheres. Absorbs unnecessary vibration without sacrificing the amazing initial velocity of the ball created by the Flash face cup. Players can get a good distance and a comfortable feeling at the same time.