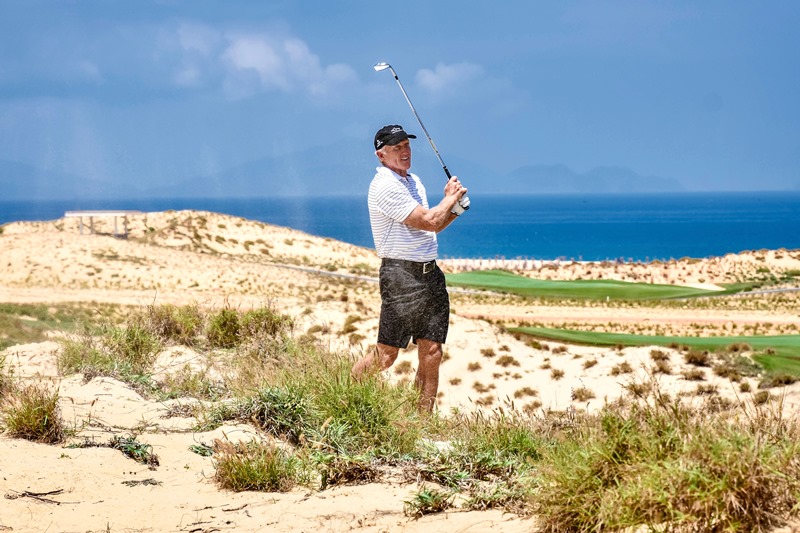 When Greg Norman offers an opinion on a golf course, it pays to take heed.

The Australian is an observer who demands respect. A legend of the game — one whose CV is studded with major wins and whose post-playing career in golf course architecture has shaped some of the world’s most exciting layouts— Norman’s opinion holds plenty of value.

Therefore, you can be pretty certain that when the man they call “the Shark” says that a layout is “gifted to golf by Mother Nature” that he holds it in extremely high regard.

The course in question, The Bluffs Ho Tram Strip, is one of three Norman masterpieces in Vietnam. The Aussie debuted in the Southeast Asian country with the Dunes course at BRG Danang Golf Resort and unveiled another gem, KN Golf Links Cam Ranh, at the close of 2018.

“I think they complement each other very well,” said Norman, who has several other projects in the works in Vietnam. “They appeal to a wide range of players.”

Norman’s affection for his trio of designs in Vietnam is indicative of his overall view of the nation’s potential to be considered one of the world’s most exciting golf destinations. Indeed, his passion for the country has made it one of its biggest advocates: a position that was rubber-stamped in 2018 when he was appointed as an official tourism ambassador.

“I think overall Vietnam is every golf course designer’s dream,” he concludes. “You have beautiful weather, beautiful river systems, beautiful mountains, the people are fantastic to deal with, the food is great, the destination is easy to get to. In terms of what it has to offer the rest of the world, there are not too many places like it.”

Here’s a closer look at the terrific triumvirate … 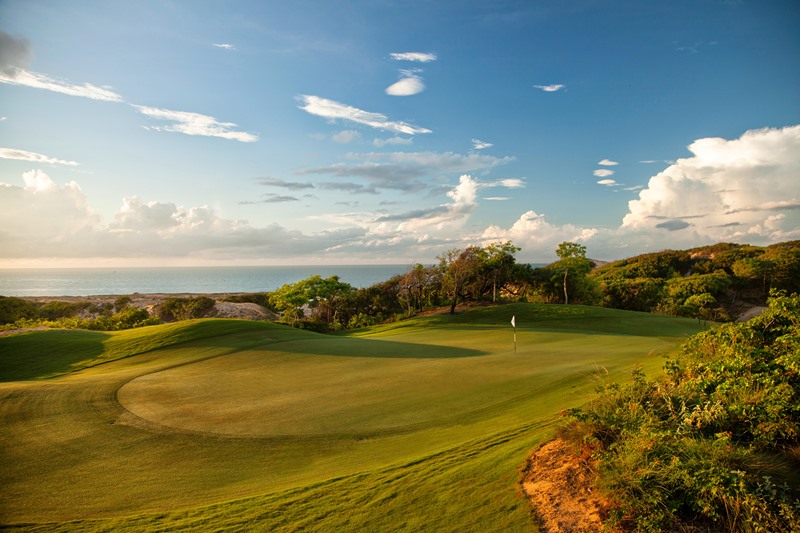 Rated by many as Vietnam’s best course, The Bluffs ho Tram Strip is as challenging as it is visually spectacular

The most acclaimed course in Vietnam might just be the best in Norman’s entire design portfolio, which now exceeds 100. Set among massive sand dunes on a mostly undeveloped piece of coastline not far from Ho Chi Minh City (Vietnam’s commercial capital), The Bluffs scores big on location.

But give the iconic Australian credit too; he let the twists and turns of the rugged property dictate much of the links-style layout, which Sergio Garcia called “spectacular” after winning an Asian Tour event there in 2015.

“I think when people play here for the first-time, they realize what a special place this is,” says Norman. “The Bluffs is one of those rare courses where you can integrate elevation changes, wind direction that changes up to 180 degrees at certain times of the year. These factors ensure that no two rounds are ever the same.”

It is one of the few championship-caliber links courses with significant elevation changes, making for a golf experience that’s as much a feast for the eyes as it is a challenge to tame.

While the highest point of the rugged property is 50 meters above sea level, on the 15th green, one of the most spectacular spots comes earlier in the round, on the short 4th.

From there, players are presented with a 360-degree view of the course, of the surrounding national forest that’s a haven for wildlife, of the expansive shoreline and of The Grand Ho Tram, Vietnam’s leading international luxury casino resort. 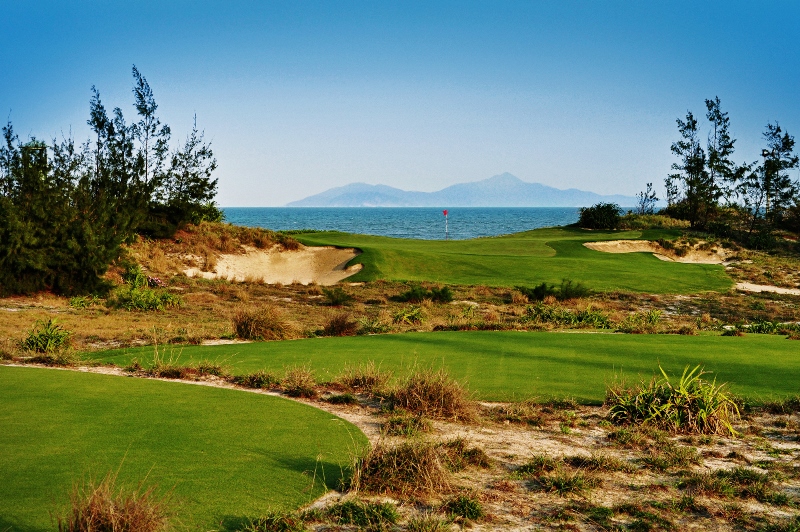 Another of Greg Norman’s big achievements in Vietnam, the course laid out by the Australian at BRG Danang Golf Resort is never anything less than killer. It debuted as one of the finest clubs in Asia when it opened back in 2010 and has maintained that exalted status until today.

Trailing the opening of the course, Norman was very honest about the premium raw materials he had to work with, saying: “The fact is, you’d be doing a very poor job to make a boring course out of a site like this.”

The Dunes, of course, is a long way from being dull. The beautifully sculpted layout here is built on sandy-loam soil and winds its way through rugged dunes and funnels of long-needle pine trees.

The nearby Marble Mountains provide an extra dramatic visual element on holes such as the 10th, a long par-5 that meanders between epic sand dunes. Despite its proximity, the ocean only comes into view at the short 16th, and even then, for just the one hole. But what a hole it is.

Beyond the small, saucer-shaped surface of the green, the white sand of Non Nuoc Beach pours down to the aquamarine expanse of the East Sea while the islands in the distant Cham archipelago rise towards the cobalt sky. 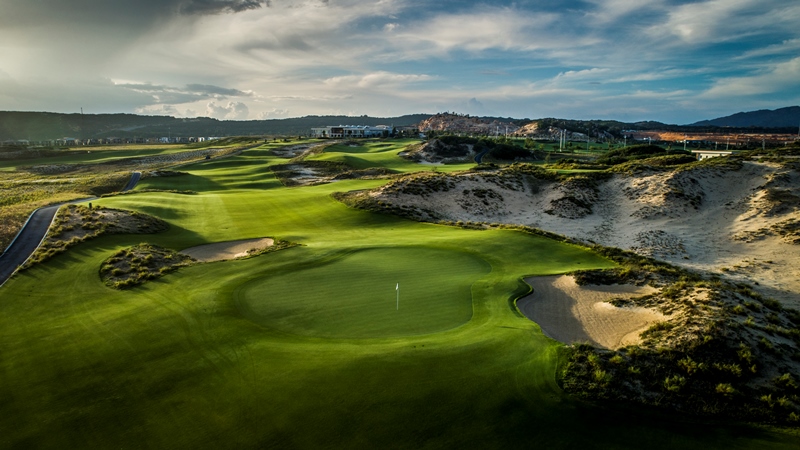 For golfers, though, the crowning attraction lies at the southernmost end of the bay, where KN Golf Links is staking its claim as one of the region’s finest new layouts.

Having debuted in late October 2018, when designer Greg Norman jetted in to inaugurate his latest creation in Vietnam – his third course in the country – KN Golf Links is fast making its way into talk about the best golf experiences in the country, if not Asia.

“I would put KN Golf Links up there in the top 10 in terms of unique properties I’ve ever been able to work with,” said Norman, who has over 100 designs to his name.

KN Golf Links features 27 holes altogether when the 9-hole, garden-style Oasis Course that runs inland from the clubhouse is factored in.

But most of the conversations so far have revolved around the Links Course, which maximizes the rolling contours of the land exemplified by spectacular sand dunes.

It boasts firm fast-releasing fairways, ample run-off areas around the greens and massive boulders, some of which form a striking backdrop to the par-5 17th hole.

“The scale and topography of the property here lends itself beautifully to a great variety of golf holes,” says Norman. “There’s a lot of up and down and natural contouring to the course, so you get these sensational visuals from tee boxes especially and really cool run-off areas where the ball can roll and turn.”