Sentosa Golf Club has marked its most recent award of ‘World’s Best Eco-Friendly Golf Facility’ by premiering a new environmental documentary film to raise awareness of the importance of climate change in golf.

The documentary forms part of the club’s GAME ON campaign, which has received backing from The R&A following its launch at the SMBC Singapore Open earlier this year.

Coinciding after it was named ‘World’s Best Eco-Friendly Golf Facility’ at the 2020 World Golf Awards this week, the film shows viewers some of the key measures already implemented at the club, such as the creation of bee colonies, the installation of reservoir-lakes and the banning of single-use plastics.

The club, which became the first golf club in the world to sign the UN’s Sports for Climate Action Agreement back in July, hopes the film will serve as inspiration to golf’s response to climate change, as well as help clubs around the world to understand the importance of reducing their carbon footprint by implementing initiatives for the betterment of the environment.

With over 61 million golfers and 39,000 golf courses worldwide, the club firmly believes golf has the ability to become one of the leading industries to help reverse climate change and make a considerable impact.

The wider GAME ON campaign aims to educate and inspire the global golfing community to create a more socially conscious industry and consumer, who will be better prepared to introduce new modern practices for the betterment of the environment, as well as improving the quality of facilities on offer throughout the world. It is closely aligned with The R&A’s 2030 Golf Course Initiative.

Speaking about the unveiling of the documentary, Andrew Johnston, General Manager and Director of Agronomy at Sentosa Golf Club, said: “Today is a very special day. The unveiling of the GAME ON documentary marks the day golf’s major stakeholders and global community unite to fight climate change. Sentosa Golf Club are proud to be at the forefront of this campaign and hope to create a legacy with golf’s leading organisations and community that will have a huge bearing on our future.”

On being awarded ‘World’s Best Eco-Friendly Golf Facility’, Johnston added: “It is a tremendous achievement for Sentosa to be recognised by golf’s leading professionals as the ‘World’s Best Eco-Friendly Facility’ and once again as ‘Singapore’s Best Golf Course’ for the third year running. Being awarded these accolades is down to the hard work that is put in by all our staff and members to maintain the high standards that are set by the club 365 days of the year. 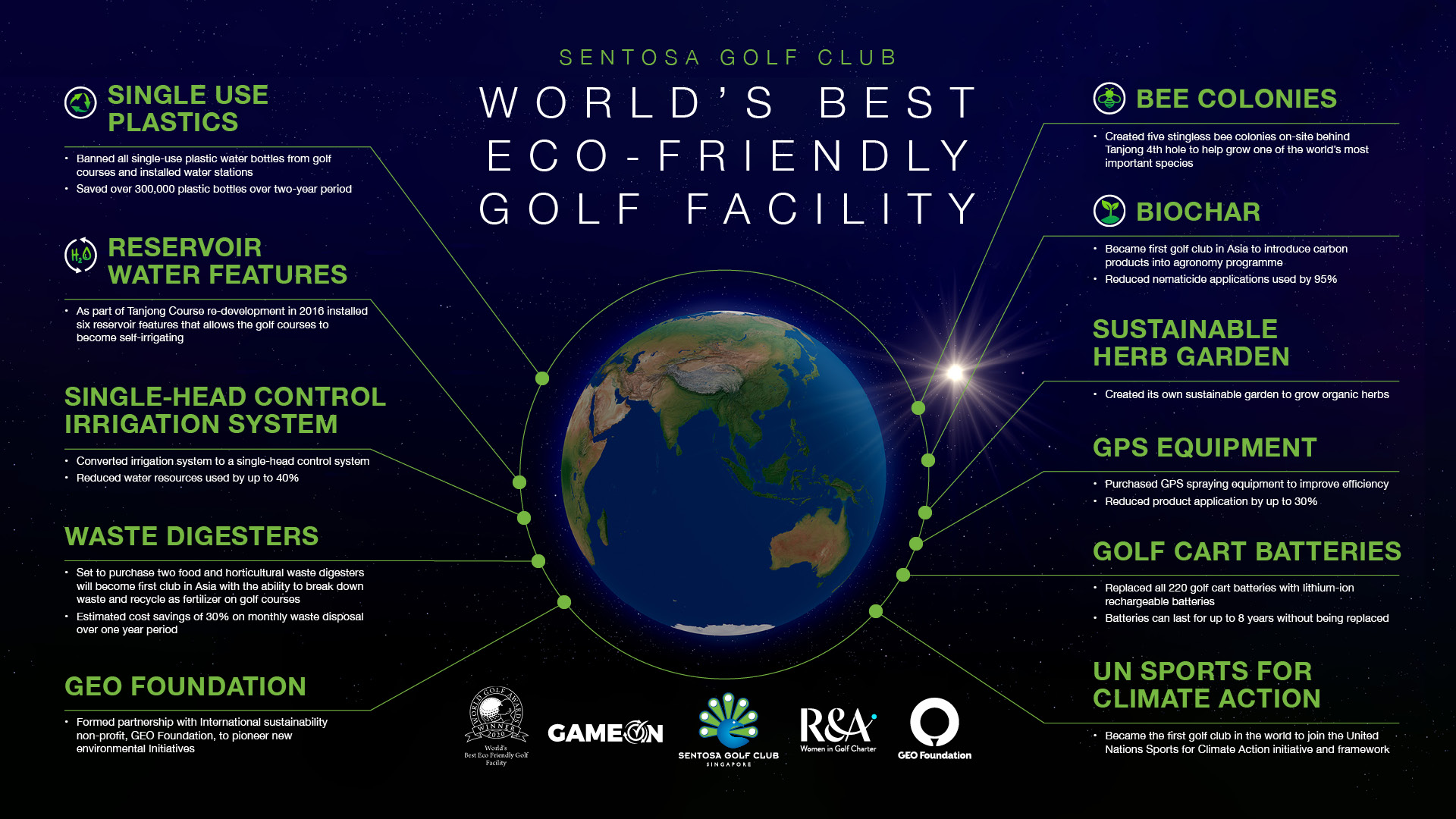 “Since 2018, we have worked hard to create a sustainable environment on-site at the club and are grateful for all the support we have received from our partners and stakeholders in our journey so far. Even with this recognition, the club will continue to improve and look to pioneer new sustainable initiatives as we look to lead the industry in tackling this critical issue.”

Sentosa fought off competition from other leaders in the environmental space to collect their latest eco accolade at the 7thannual World Golf Awards, recognised for the leadership and responsibility it has shown in planning, constructing and managing a resource efficient and ecologically rich golf environment, as well as playing an inspirational role in expanding environmental activity throughout the region.

The club also took home the title of ‘Singapore’s Best Golf Course’ for The Serapong course for the second year in a row. The course plays host to the SMBC Singapore Open every year, welcoming the world’s best players from all around the world.

Chris Gray, Head of Sustainability and Agronomy – Asia-Pacific at The R&A, added: “The R&A is delighted to be part of Sentosa Golf Club’s unveiling of their GAME ON documentary. It is great to be part of something so important and be able to work together on a global scale to fight the issues that really matter to golf and the world. GAME ON, which is closely aligned with our own Golf Course 2030 initiative, is not only a vital campaign in helping to reverse the impact of climate change, but it is also crucial to the overall survival of golf, a game that is so widely loved throughout the world.”

Commenting on the latest award for the club, Sentosa Development Corporation CEO, Thien Kwee Eng, said: “It is a great honour for Sentosa Golf Club to receive two awards at this year’s World Golf Awards. We are extremely proud of the work our team has put in throughout the year, not only expanding its environmental credentials, but also continuously maintaining the top-quality conditions of its two championship courses. By doing so, the club has attracted some of Asia’s most prestigious events and helped showcase Sentosa as one of the world’s top global tourist destinations.”

The newly crowned ‘World’s Best Eco-Friendly Facility’ also boosted its approach to environmental sustainability by forming a partnership with international sustainable golf non-profit, GEO Foundation. The collaboration will see the integration of GEO’s industry-leading OnCourse® program and GEO Certified label with Sentosa’s ‘green-culture’ to pioneer new innovative practices, as well as gather, verify, and report credible results to share with other clubs around the world.

A recent Golf Sustainability Fund Grant by The R&A made Sentosa the first club in Asia able to grind down food and horticultural waste to reuse as fertiliser on its golf courses.