Incorporated in 2013, CGPV is the master developer of Forest City, which is a30km2 mixed-use development located at Iskandar Malaysia. It lies adjacent to the Malaysia–Singapore Second Link and is a joint venture between Country Garden (60%) and Esplanade 88 Danga Bay Sdn Bhd (EDSB), an associated company of Kumpulan Prasarana Rakyat Johor (KPRJ). Forest City comprises of four reclaimed islands with the twin themes of ‘integrating businesses and the city’ as well as ‘urban innovation’.

The project aims to generate economic growth through eight key industries – tourism and MICE, healthcare, education and training, regional headquarters, nearshore finance, e-commerce service base in ASEAN, application of emerging technique and service centre, and sectors related to a green and smart city.

Forest City Golf Resort and the Legacy Golf Course is located 7 km away from Forest City reclaimed islands. Construction work of the first golf course began in July 2017 and was completed one year later in 2018. The construction also involved extending the highway that connects the mainland to the island by 1.2 kilometres.

Surrounded by the Pulai River and its tributaries, the golf course has ample water supply and is set in a natural landscape featuring the mangrove reserve. The Nicklauses have respected the mangroves as a natural resource, giving them full play in landscaping and using mangrove clusters to stabilise the course’s foundation. 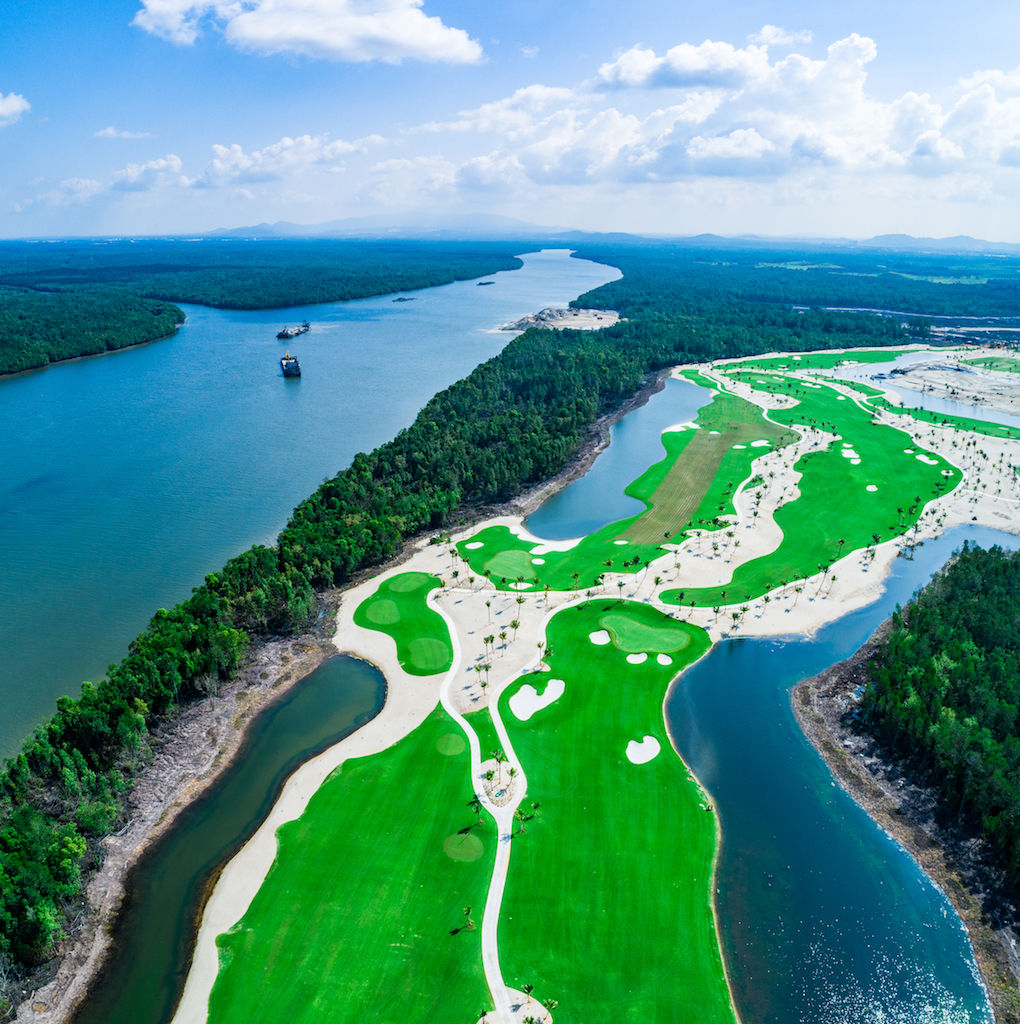 The second and third golf courses, designed by Liang Guokun, an Executive Director of Country Garden Group, and also a course designer will be completed in September 2019 and 2020 respectively.

Forest City Golf Resort and Golf Course General Manager, Arthur Yeo said the Legacy Golf Course, which has a “desert-style” concept and is surrounded by mangroves and natural water features is a one-of-a-kind golf course for novice and professional players.

Yeo, a renown veteran in the golfing industry, who was the Project Director of Spring City Golf and Lake Resort (which was once ranked the number one golf course in Asia, China and Top 100 in the world), said there will be residential homes, retail shops and travel offerings surrounding the new golf resort to complement the new golf resort for a holistic leisure experience.

Dominic Wall, the Director of Asia Pacific R&A and Paul T Stringer, President of Asia Pacific Nicklaus Companies were also present at the opening ceremony of the Legacy Golf Course.

Country Garden Malaysia Director of Strategy, Ng Zhu Hann said the opening of the Forest City Golf Hotel and the first golf course designed by golf legend Jack Nicklaus and son, Jack Nicklaus II, developed as part of the growth of Iskandar Malaysia, will further boost Johor as a preferred leisure destination in the region.

“Forest City Golf Resort and the Jack Nicklaus designed Forest City Legacy Course will attract golfing enthusiast from all over the world and elevate the state of Johor’s golfing tourism reputation in the region as this is a world class championship course. This will also, in turn, draw major investments, promote the state tourism, opportunities and skill transfers to the locals,” Ng said.

Indeed, it is hoped that this new golf resort will further elevate Johor’s reputation as an international golfing destination and bring direct economic benefits to Johor’s local economy, including the overall development surrounding this tourism hub.

Mohd Jamal said he was optimistic the Legacy Golf Course will aid in the revival of golf tourism which was popular in the 1990s but had died down since then due to factors such as lack of support from tourism agencies in coming up with attractive golf tourism packages.

“Other factors include poorly maintained golf courses, competition from golf clubs in Indonesia and Thailand, and a lack of direct flights to Johor,” he added.

An officiation ceremony, a Ryder Cup-styled tournament between the Chinese and International Media, and a groundbreaking ceremony of the second and third golf courses were organised in conjunction with the opening of the Forest City Legacy Golf Course and the Golf Hotel. A relatively straight par 4 opening hole with bunkers either side of the wide landing area. The green is more easily approached from the left side. The back-right part of the green is guarded by the right side green bunker. A low collection area behind the green will gather long approach shots.

The tee shot on this par 4 is best played to the right side, the best angle to approach the green. The front left of the green is guarded by three bunkers that create an element of visual deception. The front of the green is convex with valley separating the back from the front section. The hidden valley between the bunkers and green will collect any short approach shots.

A wide par 5 with water on the right-side from tee to green. The right-side fairway bunkers will tempt stronger players to try to carry them and if successful will be rewarded with a shorter route to the green. A pot bunker protects the second landing area. The green is separated from the lake by a beach bunker. A visually spectacular par 4 adjacent the river with a lake water right of the landing area. A beach traverses the right side of the fairway from tee to green. The bunker cluster short left of the green makes an approach from the left side challenging. 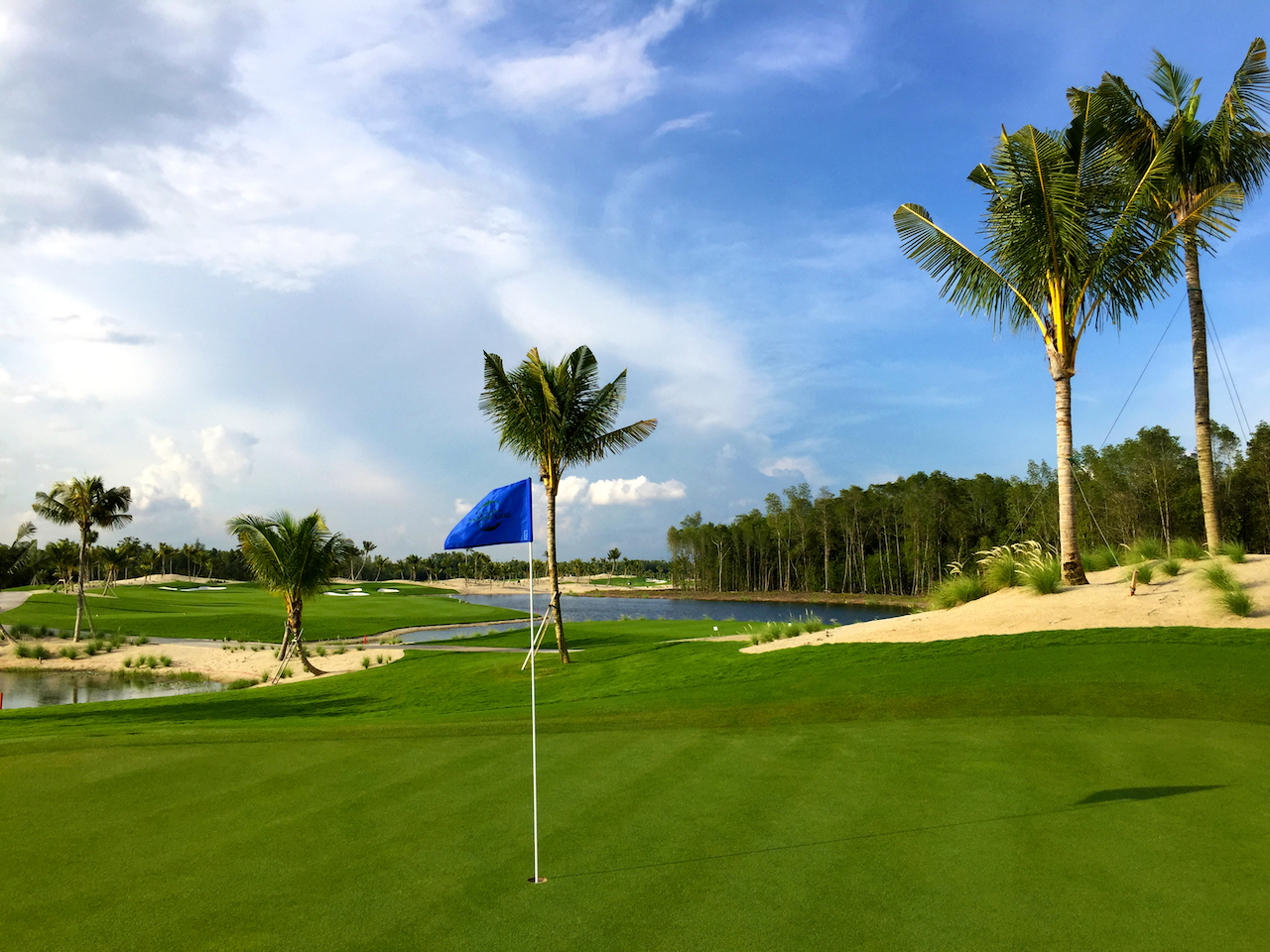 The par 3 has water left of the green. The green is undulating and well-guarded by bunkers left and right. The high pin back right is well protected.

The shortest par 4 on the course with water right tee to green. The undulating perched green is well-guarded with bunkers left and right. A valley behind the green will collect any long shots. This hole will be deceptively hard. A long three-shot par 5 with double fairway at the first landing area. The best tee shot will on the high right-side fairway, but the generous width offers players numerous ways to play the hole. Players on the low left fairway will be visually blocked by the high “dune” left of the second landing area. The low fairway extends left and behind the gently undulating green. 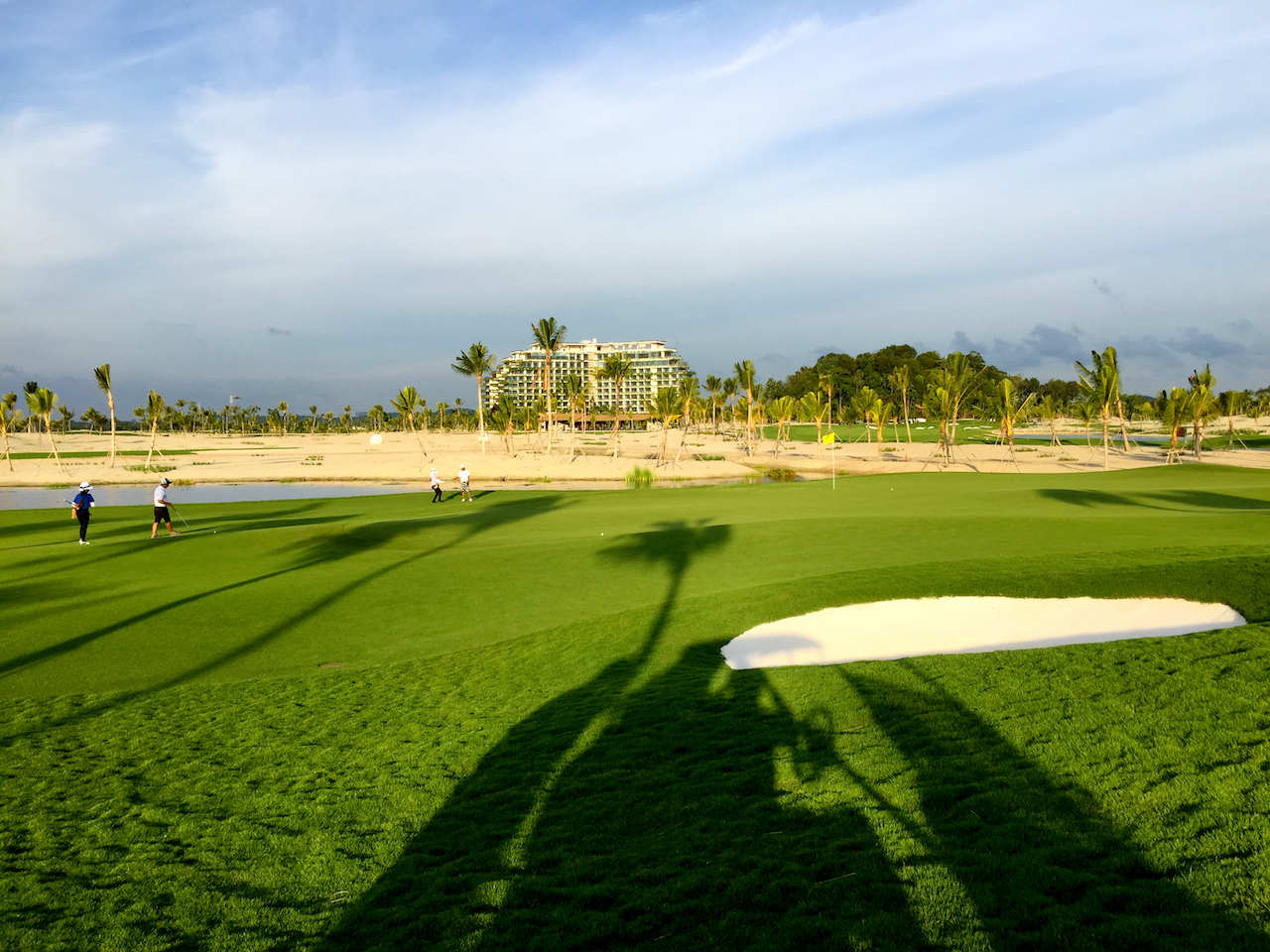 This is a long par 3 with water on the left. The back left of the green is protected by a bunker. Mounding between the bunkers right of the green will feed a right to left shape shot.

A relatively short par 4 playing to an elevated landing area with water on the right. The two bunkers in the middle of the fairway hide the low fairway on the left. The small green is more easily attacked by three-shot that flirts with the lake. 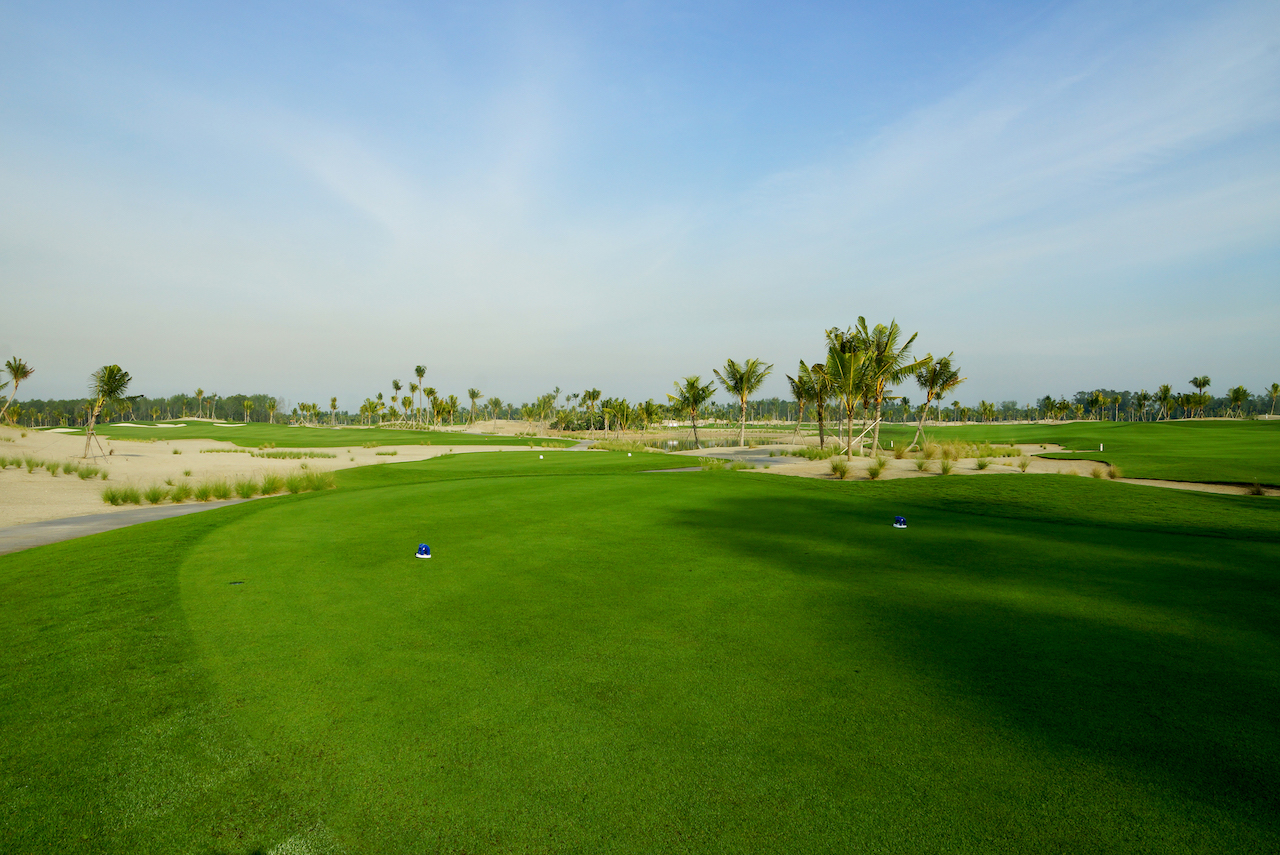 A strong par 4 with fairway bunkers short left and long right. The contained left side of the green is more easily approached from the right side of the fairway. The right side of the large green although visually more inviting will repel shots that may be slightly offline. The best place to miss the green will be right, offering a relatively easy chip shot. Approach shots left will be penalised by the deep front left bunker.

This is a short potentially drivable par 4. A heroic tee shot may be played over the lake to the green. A safe tee shot to the fairway on the right will be faced with a second shot over a beach bunker that surrounds the green. Some strategic bunkers make this approach angle testing.

A long par 5 with numerous options for both the tee shot and the second shot. The bunker right of the first landing area may be carried by stronger players offering a good view of the green. Bunkering at the second landing area appears to be closer to the green than they are, thus creating a visual deception. 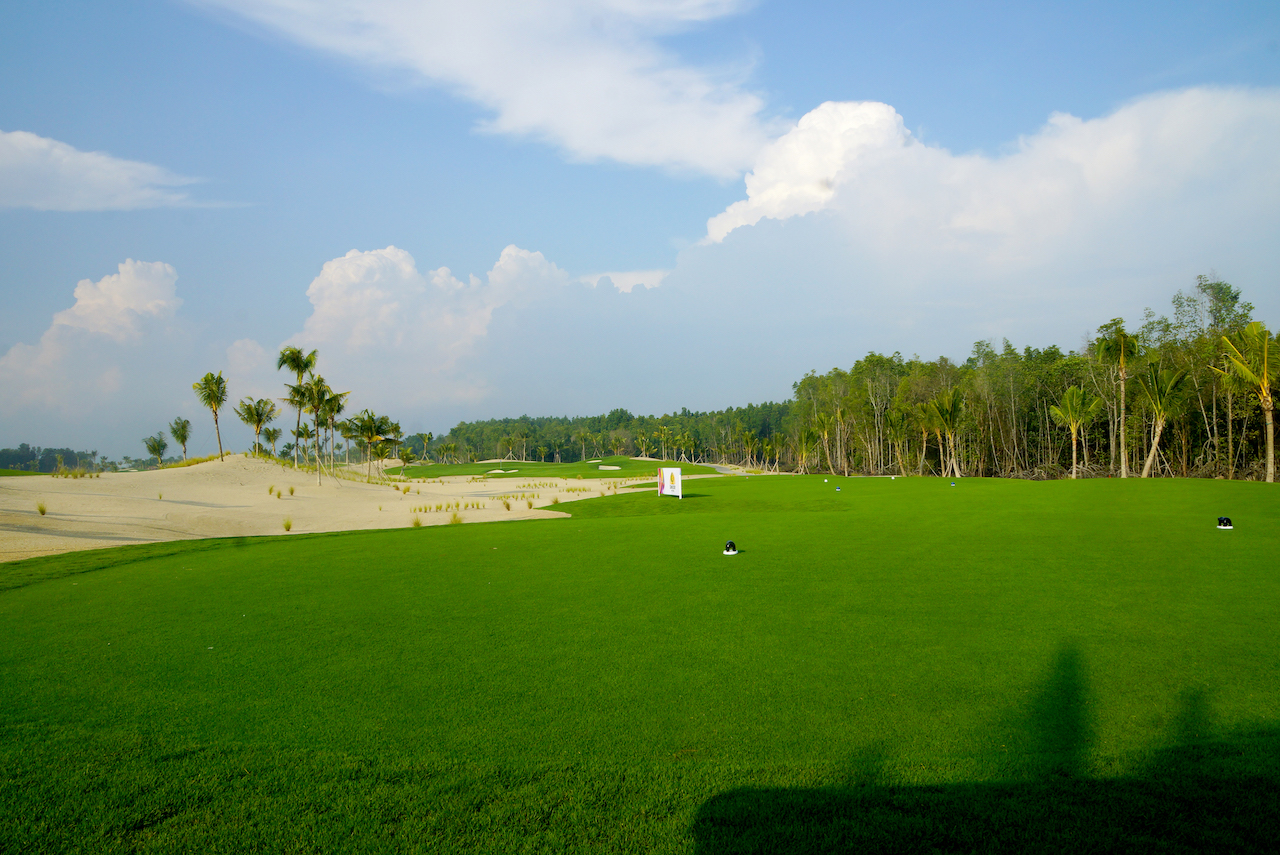 A strong par 3 with a waste bunker from tee to the left side of the green. The support mounding right of the green will feed a shot onto the green but the bunkering will collect an errant shot.

This strong par 4 has a double fairway, high left and low right. A heroic tee shot that carries the bunkers to the high fairway will offer a good angle to the green. The green is large and soft undulating. A large sandy waste bunker extends through the hole and protects the right side of the green.

A very short par 3 adjacent to the river. The beach bunker extends tee to green and may flood at high tide. The green has significant elevation changes between pin locations so accuracy off the tee is vital.

A relatively short par 5 depending on the wind direction. The beach bunker on the right extends tee to green and is to be avoided. The bunker cluster short left of the green may be carried for and easier approach angle.

The bunker right of the landing area may be carried by strong players. If successful a partial view of the “punch bowl” green will be the reward. The large green is almost entirely visually hidden by high dune. Any approach from the left is totally blocked.

A strong par 4 with water right of the tee shot. The best angle to approach the elevated green is from the right side close to the lake. Tee shot to the left will face a trickier approach with the hill and deep valley left of the green coming into play. The green is guarded by a deep valley and “pot” bunker on the left. 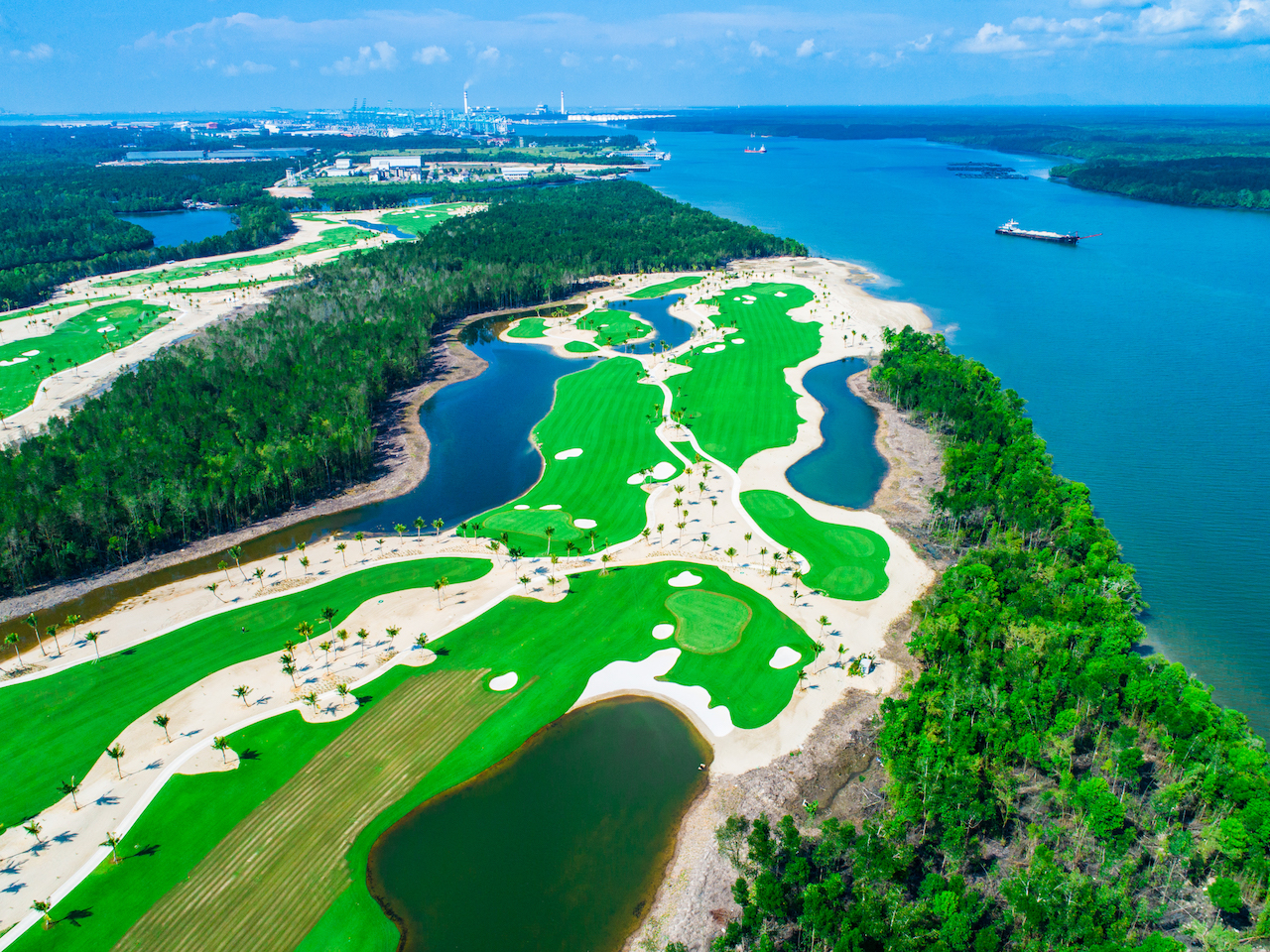